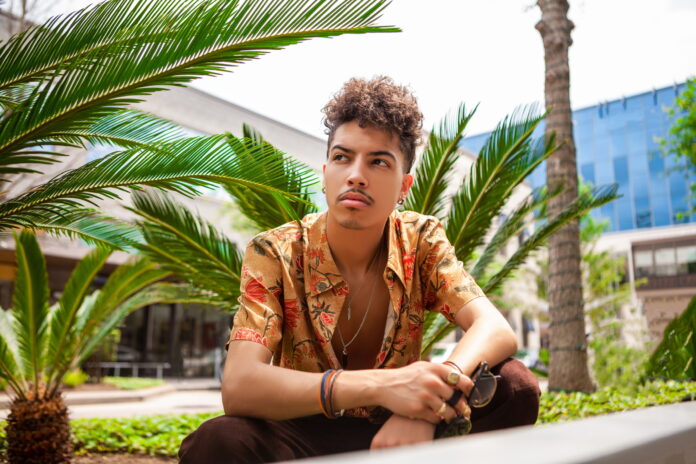 MIME Records recording artist, Brandon Lewis has released his highly anticipated R&B duet featuring his label mate, Jessica Ray titled “Back In Love”. The Memphis-born artist has released numerous songs over the summer and continues to rise. In an exclusive interview with ENSPIRE Magazine, Lewis talks about his new single, inspirations, and goals for the future. “Back In Love” is available on all streaming platforms now.

“Back in Love” is a smooth R&B track that combines Lewis’s addicting falsettos with Ray’s rich vocals to create nostalgic harmonies that make for a seamless and catchy single. The hypnotic low tempo beats and drum kicks add a Trap feel to Lewis’s R&B-inspired Pop sound and is beautifully complemented by Ray’s dramatic vocal runs. “Back in Love” is a duet for lovers, “Instead of falling back, we fall back in love,” the duo sang over the Blac Elvis-produced record. While so many songs are about breakups, this song gives listeners truth and wisdom about love. “I have a lot of fear for the lovers of the next generation,” Lewis sings.

Lewis cites his hometown of Memphis, TN as one of his biggest inspirations for the visuals and sonics of his style. The city has a rich and soulful musical origin, producing artists like Otis Redding, BB King, Al Green, and many more. More contemporary artists that have influenced Lewis include James Brown, Jakie Wilson, Marvin Gaye, and Pharrell Williams. Lewis welcomes genre-blending and diversification of sounds, and “sees how the R&B genre becoming more rap and afrobeat influenced now as a result of the rise of the hip/hop genre.”

On producing his new single and first duet, “Back in Love”, Lewis treats each of his songs with a different process that lives and grows on its own. His collaboration with Jessica Ray brought a new sound and soul to the music. “It’s all about energy! I think it’s a beautiful thing to collaborate, especially when you’re working with someone you have grown to know and can appreciate their creativity” The collaboration has certainly paid off. The multi-talented Lewis also directed the music video for the single and tells the story of two consenting lovers realizing they are meant to be together. The music video compliments Lewis and Ray both and celebrates love with effortless style.

On top of producing, singing, and directing, Lewis’s lyrics convey meaningful themes and messages. His earlier release, “Black Man”, is an empowering song about what it means to live as a Black man. Lewis wants to share diverse themes and messages in his music. Lewis believes “there are no new emotions, so my goal is to resonate with as many people as I can by writing many different relatable stories or ideas.”

Despite releasing music during an extremely challenging time during the COVID-19 pandemic, Lewis is confident that he has made immense mental and career strides. “I feel like pandemic proved to me how mentally and spiritually strong I am and can be in future crises. I’ve released multiple songs, videos, and did many interviews during the pandemic. It’s got me confident about a bright future in such a tough industry, to say the least,” Lewis adds. His resilience leaves a lot of room for him to grow. Lewis sees himself gaining traction in the industry and becoming more established as an artist. “I’m always pushing for more fans and more support around the movement. I want people to grow with me!”

Lewis is a star in the making. His hard work shows in his music and he continues to achieve his goals. By staying close to his roots while experimenting with new sounds, Lewis has found a unique place in the industry and is here to stay.

Erick Brundidge: Dedicated To The Grind