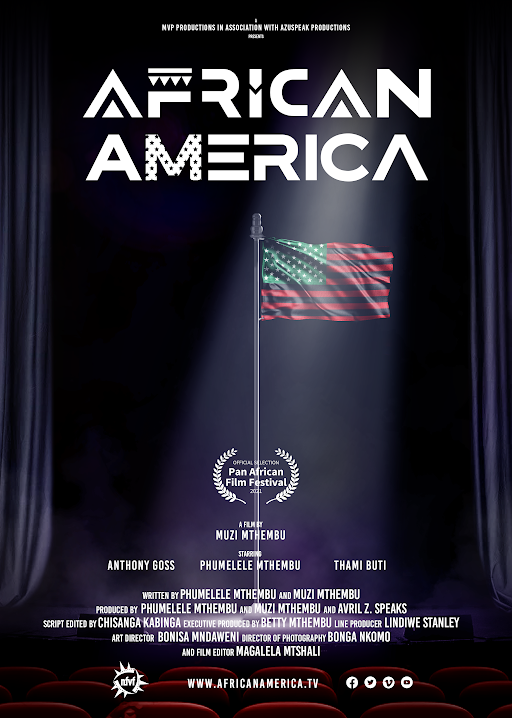 South African indie film African America, directed by Muzi Mthembu, has been featured in the 29th Annual Pan African Film Festival (PAFF). PAFF is known to be America’s largest Black film festival and the largest Black History Month cultural event in Los Angeles—featuring over 200 Black films and 100 fine artists from around the world. The 2021 Pan African Film & Arts Festival has continued its tradition of showcasing the broad spectrum of Black creatives’ works by virtually featuring narrative, documentary, short, and mini short films from over 45 countries, such as Nigeria, Cameroon, and Kenya.

Feature Narrative African America premiered worldwide on Sunday, February 28, 2021, as Mthembu’s first-ever feature film. The film’s plot centers around Nompumelelo, a cynical South African woman accepted to Julliard who finds out the hard way that the 2017 United States isn’t as welcoming as she had dreamed. But as she’s exploring the ups and downs of living in New York City, she learns about true love, true happiness, and true citizenship. Mthembu says that he developed the concept of the film from the experiences of his sister and African America’s lead actress, Phumelele Mthembu from when she visited New York City to study theatre.

The African America story was written by both Phumelele and Mthembu during the United States presidential election of Donald J. Trump. During this time, Trump implemented new immigration policies that affected immigrants wanting to obtain visas and official citizenship. Mthembu says this situation inspired him to create a film revolving around the difficulties of “making it” in current-day America as an African immigrant.

“[Phumelele] wrote the story and I wrote the screenplay just as America was under a new political administration, which had policies about immigration that really contradicted the definition of America that I had previously,” Mthembu said. “As the country appeared to be closing its borders, it forced many Africans to rethink what their position would become in relation to this wealthy nation. This inspired me to create a film about this realization by telling the happy story of a young woman learning that the grass is indeed greener where you water it.”

Phumelele wrote the role of Nompumelelo with herself in mind to play her, creating the character she has always dreamed to portray. She says that as a Black woman, there have been many obstacles in getting cast as lead actress and that she had many doubts about writing the African America storyline, but she knew she had to carve a new path as an actress.

“So often in our industry, the idea of a lead actress is the antithesis of the average Black woman,” Phumelele said. “You’ll often be cast as the “funny one” or be put into someone else’s perception of your “type.” I decided to write my dream role, and it wasn’t easy. So many sales agents, producers, and distributors told me it wasn’t going to work. I had so many doubts in my own mind because of that. But I had to do it, so I did.”

When speaking on collaborating with her brother on his first feature narrative film, she discussed how her own individual experience filming African America was extremely challenging but rewarding. She brags on Mthembu, saying he is a “purist” in his art, as he taught her how to embrace her skills as an actress by pulling the audience “deeper” into the story.

“Muzi is the most talented person I’ve ever met, and there isn’t a director, writer, or actor whose opinion I respect more than his,” Phumelele said. “He is a purist in his art and so I knew I was going to be stretched and challenged. So often as actors we want to make the biggest and most dramatic choice because we think that’s the powerful choice. Muzi taught me that that approach can actually pull the audience away from the story and into a “performance.” He showed me how to get out of my own head and into the moment. All my intimidation and feelings of inadequacy went away under his leadership. I’m eternally grateful to have been directed by him and also to have partnered with him on our film. Writing and producing the film with him was the only way the film could’ve been made.

The pair were faced with many challenges while creating Africa America, but preserved through it all by believing in their craft. Both Phumelele and Mthembu expressed that even though the filming process encountered roadblocks here and there, they are extremely proud of what they’ve accomplished as a team and as independent filmmakers.

“Independent filmmaking is not without its challenges,” Mthembu said. “You will never overcome these challenges while plagued with self-doubt. As I put one foot in front of the other, before I knew it, a beautiful film emerged and I couldn’t be prouder of what we accomplished.”

Phumelele says that she is glad the pair had a team of people that believed in their dreams. The support of their team motivated her to keep going and to keep pushing towards finishing the film project, despite facing constant rejection.

“Filming this film has been the hardest thing I’ve ever done. Phumelele said. “The amount of rejection and closed doors was almost unbearable. But every day we were on that set with a team of people that believed in our vision even when I struggled to was overwhelmingly surreal. It’s been a journey but I have loved it.”

The film was shot in both New York City and South Africa, with the New York portion of the film being produced by Avril Z. Speaks. Prior to African America, Speaks has produced the 2018 drama film Jinn, starring Simone Missick and Zoe Renee and the 2019 film Hosea, starring Avi Nash and Camille Rowe.

Speaks says that she can relate to Nompumelelo’s experience of following her dreams, and thinks that many others can too. She is delighted about the film she has produced and its message, and how it exhibits that there is no place or goal that is “perfect,” and that sometimes, following your dreams can be hard.

“I’m very proud of the film that we created with African America,” Speaks said. “I think it is a very moving story and very timely for where we are right now. I can relate to Lelo’s plight of having a dream that won’t die, yet constantly being told “no.” I think a lot of people can relate to that. This film shows what happens when someone goes against the grain and follows that dream at all costs. But ultimately this film is about reframing the notion of a so-called “Promised Land.” There is no perfect place, no perfect job, no perfect relationship — everything requires work and care to create something liveable. And I think Muzi did an amazing job at communicating all of that in a visual way.”

When asked how they feel about the film being featured in this year’s Pan African Film & Arts Festival, they all agreed that they are proud to be a part of the event and that their hard work has paid off despite facing many obstacles and challenges along the way. Speaks is glad that the film can premiere in front of their core African diaspora audience, even in the midst of the COVID-19 pandemic.

“I’m ecstatic about the film playing at this festival because, with all of the obstacles, it’s nice for the film to be acknowledged in this way,” Speaks said. “And to finally get a festival world premiere even in the midst of the pandemic gives us hope for the future of this film. What makes me most excited, though, is that our film is premiering in front of its core audience, the African diaspora. Pan African Film & Arts Festival is an opportunity for our film to be seen and discussed among people who appreciate the nuance of Black stories and can celebrate the film on its own merits. That means a lot to me because as Black storytellers, we often are pressured to adjust our narrative for a white gaze.”

The film can be found on the PAFF website. To learn more about African America, you may visit the official website.