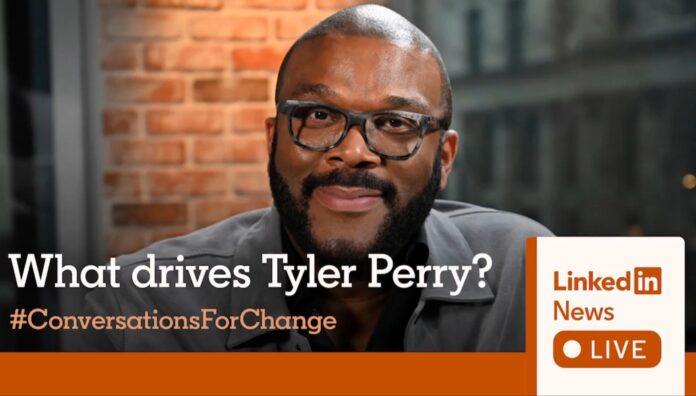 Earlier this month, LinkedIn teamed up with the guest editor, Tyler Perry, in releasing new data and launching a series of initiatives to help drive meaningful conversations in support of the career journeys of Black professionals. As one of the most successful directors and producers in Hollywood today, Perry sat down for a conversation with Gayle King to discuss his experiences, successes, and lessons learned to kick off the series Conversations for Change. Conversation for Change focuses on the junction between life and work and the experiences of individuals with topics such as diversity, inclusion, the prevalence of discrimination, and other obstacles that Black professionals face in the workplace.

Perry said in his conversation with King, “I wanted to be a part of the Conversations for Change program and the LinkedIn editor for Black History Month because there’s so much that is going on in the country. I wanted to just be a beacon for people to know that you can do it too. I’ve been homeless. I’ve had nothing. I’ve come from nothing”. Perry added. “You talk about Black history, you’re looking at somebody who is sitting here on land that was once a confederate army base. Now, I’m the owner of my studio and thousands of people come to work here every day, of all races of all creeds and colors, and LGBTQ. And I think that [being the LinkedIn editor for Black History Month] is a great way to just be a light for anybody out there who is doing the same or who wants to do the same.”

The conversation between King and Perry also focused on the importance of diversity in corporate America and the corporate world. When discussing how companies can be more intentional about recruitment, diversity, and inclusion, Perry said, “If companies are not putting people in positions of power, then [inclusion] is going to be very difficult to do. I know everybody’s trying to move toward change and move toward more diversity, but what I’ve found, is that if I hire someone who is white, that person will usually hire more white people. If I hire someone who’s gay, that person will usually hire more gay people”. Perry concluded. “I think if corporate America starts to put [Black] people in places, in power, where they wanna see more diversity, then that will happen. Because we choose from who we know when we’re hiring.”

Finally, Perry touched on the importance of Conversations for Change and what he hopes to come of the series. Perry said, “The word conversation means a dialogue between people, right? So the conversation is so important because it’s in that where you find all the truth, all of the pain, all of the nuances, and in business, I just think that it’s very important that as you’re having these conversations, so you get to the truths of what’s really affecting and plaguing so many of us. And to be a part of a great conversation can speak to the change of your company, it can speak to healing, and it can speak to better working relationships.”

This programming is in addition to LinkedIn’s continued efforts to create equitable economic outcomes for every member of the global workforce and ongoing editorial coverage on this important topic. LinkedIn adds that they are “committed to facilitating equitable outcomes, addressing bias wherever it lives on the platform to ensure Black professionals have access to the same jobs and opportunities and is equipping employers at scale with the tools and resources to build diverse workforces.”

Viewers can look for Tyler Perry’s interview and watch all of the other programs in the Conversations for Change series on LinkedIn’s page LinkedIn News.