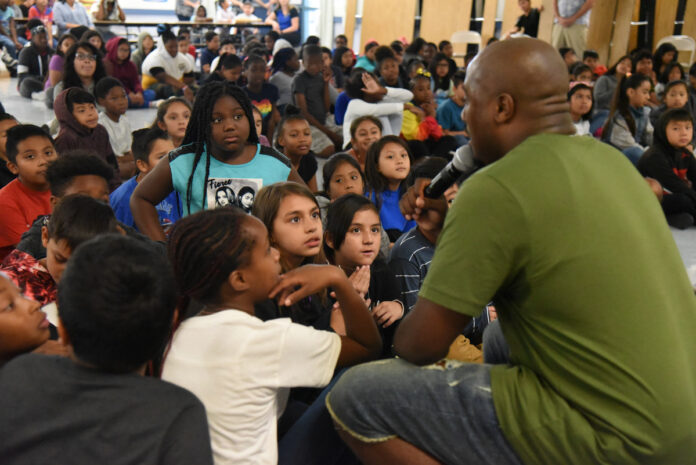 When Brandon “Griot B” Brown started teaching in California public schools, he wanted to truly change the lives of his students. His secret? Hip-hop. After incorporating music into his classes, Griot B saw his students respond not just to his lessons, but to the culture of his classroom as well. After watching his students succeed, he made learning fun for kids across the nation and created SchoolYard Rap, an educational consulting, curriculum, and content production company that bridges education and entertainment. With SchoolYard Rap, kids learn about diversity, empathy, and history focusing especially on uplifting minority voices. Now, Griot B has taken those lessons to adults with his new album “Racism.”

“Racism” tackles the subjects of violence, slavery, and even “Karens.” With his album, Brown educates people about race and inequality to spark more conversation on these topics and bring about positive social change. Despite being an independent artist, Griot B’s album has been a huge success, with the album’s first single “Set it Up” even reaching Billboard’s Top 40 charts alongside artists like Megan thee Stallion and Justin Beiber. In ENSPIRE’s interview below, Griot B talks about using music for education, succeeding as an independent artist, and bringing creativity to the classroom.

First, I’d love to hear how you got your start. When did you first get involved with music, and why did you decide to bring that into the classroom?

I actually started rapping as a teacher. It was never an aspiration of mine, this artist’s life. The need to educate students in a way that connected with them is the root cause of my music. A student of mine was listening to music during lunch and asked me to listen to it, and, after hearing the curse-word-riddled song which lacked any form of lyricism or content, I told him the music was trash. He replied with a confident, “Mr. Brown, you can’t do better.” And so I accepted the challenge and made my first song. Students loved it.

When did you decide to transition from using music in your own classroom to sharing it with others?

When becoming an Assistant Principal, I realized that there was more of a need for what I was doing in the classroom everywhere. I created the first-ever Black History album, Ourstory, when I realized that all our students were being taught were the same old stories of slavery and Dr. King. I tried to, but I couldn’t blame the teachers because, when I did a survey, I learned that all they ever learned was slavery and Dr. King. The cycle repeats itself until something interrupts it. So, I set out to do just that

What made you expand your work to create music for adults as well?

During the summer of 2020, with all of the unrest and riots, because more Black people were being killed indiscriminately by police and civilians acting as police, my wife was pregnant. She did not want me to go protest and voice my concerns and demand change. She prompted me to instead use my gifts and create something to educate our country on the systems of racism that are the root cause of these deaths happening and the riots/protests occurring. So I made “Racism” with the intent of educating adults and doing my part to make a change in his country.

Why do you think music is such a great avenue for education?

If I asked you to say your “ABC’s” you would start it inadvertently by singing the tune we were taught as kids. That is because music is such a dynamic way to make learning stick. Whether you are 5 or 35, hearing something over a melody or rhyme will increase your attention in learning it and intention to learn it.

Since its release, your album “Racism” has been an enormous success. What has it been like to be so successful with your music as an independent artist?

It’s such a phenomenal thing. To see my name up there on the same charts as big-name people and well-funded labels is truly a testimony to the team around me and the music that has been made. I believe that this music is crucial to our country’s growth and change. To see the music I make in a place that shows the commercial validity of it is confirmation to me that the world is ready to hear and learn.

Do you have any advice for other educators looking for creative ways to teach their students about social issues or under-represented groups?

Reach them where they are, and remember the truth is often uncomfortable, but it is still the truth, and that must be told. As an educator, regardless of age or background, you have a job; that job is to educate all students. To do this job, you have to do what it takes; be silly, be creative, be vulnerable, be real. I say in a song “Do you still watch black and white TV/do you hunt and gather food to eat/ do you warm your bath over fires heat/if no, then change the way you teach/switch it up like Nintendo/take long shots like extendo/if progress is your end goal, evolution is essential.”