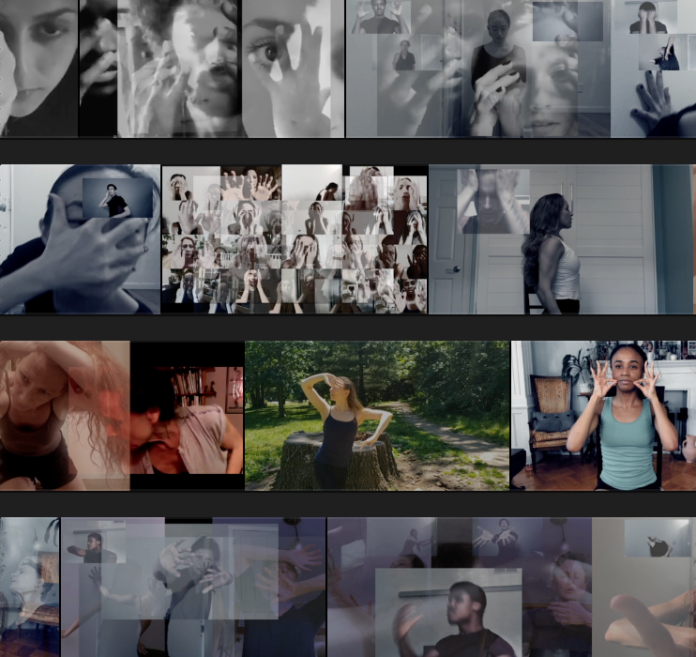 ( ENSPIRE She Did That ) In Partnership with New York Live Arts – WOMEN/CREATE! Present an Evening of Strong Works Visionary Female Choreographers

For eight years, Jennifer Muller/The Works has curated the WOMEN / CREATE! festival, bringing together prominent female choreographers for an annual New York City season in a shared program format. This year’s Festival will span the gamut of dance techniques, from contemporary to club and street styles, and will feature four dance films and two live world premieres filmed at New York Live Arts.

Women choreographers have always been innovators of dance, and WOMEN/CREATE! celebrates their creativity with those roots to present an evening of strong works by six visionary female choreographers. Karole Armitage, Sidra Bell, Jacqulyn Buglisi, Tatiana Desardouin, Meagan King, and Jennifer Muller will join for a distinguished night of programming that celebrates women creators and their compelling voices in the dance world. The performance will be followed by a talkback moderated by Danni Gee, highlighting the unique experiences of our 2021 choreographers and the different challenges they have faced as women, with perspectives from the 80s through today.

“WOMEN / CREATE! is an opportunity to witness companies of expertise and impact – choreographers, each with a powerful original voice who create work from unique points of view yet share a sensibility that combines virtuosic movement with an expressive edge that moves minds and hearts – work that dances full out yet speaks of both individual experiences and shared humanity. This work is knowledgeable, long-lasting and current at its core,” said Jennifer Muller.

“I had an unexpectedly visceral reaction when the six dancers began taking their bows at the conclusion of the performance. I found myself so entrenched in the world Bell created that it took a couple of minutes to pull myself back out of it. ⁠ There was not a single moment, costume, prop or lighting element that went to waste. Whether it was a subtle elevated walk on the balls of the feet, a projected live-video feed, or contacts in the performers eyes, everything had a purpose and fed into the larger atmosphere of the work. This atmosphere was charged with a heightened urgency and drama that felt equal to the crisis of identity so many of us and our communities are facing today. The multiple ways in which Bell and the dancers wrestled with and perceived the idea of identity were rich and vast. A moving and noise-making apparatus attached to dancer Misa Kinno Lucyshyn spoke to a complex and voyeuristic relationship with our identities and technology. The poignant repetition of the sung words ‘my beloved’ and different parts of the body while dancers intertwined projected a sense of identity woven with intimacy and community, while the jarring violence in other sections of the choreography referenced a powerful sense of self-doubt and indignation. ⁠The way in which Bell presented this perplexing material revealed itself as a metaphor for how we approach and deconstruct identity. I left the theatre feeling like I had more compassion for the diversity of our fellow human beings, grappling with the idea that this beautiful diversity is what makes our identities so hard to pin down.” – DIY Dancer Magazine

In its first indoor, performance onstage since the pandemic, Buglisi Dance Theatre is presenting the world premiere of the Invisible Embrace choreographed by Jacqulyn Buglisi. The company has been honored to be a part of the festival since 2014, premiering such works as Sacred Landscapes, To the Spirit of Enheduanna, and Moss Anthology, as well as iconic BDT dances Threshold and Sand.   Buglisi has dedicated her life works to the belief that movement expresses the story of mankind, revealing the wonder, mystery, sacredness and truths of the human condition, and the resilience of humanity in the face of struggles and sorrows. In the Invisible Embrace, she seeks to awaken our humanity by reaching into the hearts of the community during this critical time of division and need for unity by speaking out for individuals in today’s America who feel invisible, or expendable, by virtue of race, isolation, and diaspora. In times of chaos we need stories that bridge distances giving physical dialogue to the human drama to reveal the invisible beauty of mankind’s soul.   The work for eight dancers features commissioned music by ASCAP award-winning composer Alex Weiser recorded by the Merz Trio and Soprano Eliza Bagg, a film by Terese Capucilli of movement dialogues created during the pandemic, projection design by Joey Moro, and lighting design by John Cuff. Inspired by the writings of John O’Donohue, Dante’s Inferno, Claudia Rankin, Heidi Andrea Restropo Rhodes, Layli Long Soldier, and Rilke, Buglisi questions what makes us human, acknowledging the moral necessity to hear each other’s voices, and embrace the concealed beauty of existence.  This premiere of the Invisible Embrace features four of the five sections of the ballet.

Jacqulyn Buglisi and Buglisi Dance Theatre is deeply grateful to the National Endowment for the Arts, the O’Donnell Green Music and Dance Foundation, and the Harkness Foundation for Dance for its generous support of this dance.

What is the groove? How do you find it? How much weight does it hold in self-expression? In Dance Within Your Dance, Tatiana Desardouin invites you to connect with the techniques, rhythms and essence of hip-hop and house dance. Tatiana encourages her audiences to question their understanding of the groove and therefore of Black culture.

Why is the groove not just a simple esthetic and disposable element but the essence of street/club dance styles and a roadmap to social justice through the physical expression of Black culture. In her work, Tatiana also touches on to the process of street dancers towards finding their identity, or groove, by highlighting the social aspect of the community (dancers influencing each other by being in the same space), the fashion, the personal training, the moments of introspection and the embodiment of all past experiences to create their own and collective signatures.

“Dance Within Your Dance is a slick, energetic foray into the movement conversations that happen between dancers while dancing. The work was created with the concept of a groove in mind – the concept itself, what it looks like on your body, what it is musically, rhythmically, how it influences instinctive movement, and how different bodies express it. The definition of a groove is articulated with aplomb by these three dancers, who swivel hips, slink, slide and drop their bodies into these rhythms with enviable flow. […] the three women glance at each other knowingly, feed off one another, while maintaining their own distinct style.”– Lauren Gallagher, Lacina Coulibaly, Nora Chipaumire, Passion Fruit Dance Company, Les Ballet Afrik at E-Moves – New York, DanceTabs (May 2018)

“Desardouin emphasizes these styles’ roots in black culture and is dedicated to exploring them as cultural forms, approaching her work as a call to action. ‘You cannot be about this culture, about this movement, and not support the struggle of my people,’ she says.”- Dance Magazine, “25 to Watch,” 2020, by Ephrat “Bounce” Asherie

“Tatiana’s work is soulful, full of the complexity and joy that exists in the world, the clubs and our hearts . A great new voice has arrived. BRAVO.” – Adesola Osakalumi, Fela, Equus, Syncing Ink, Othello (Movement Director)

“This is one of the best street dance shows I’ve seen in the last few years!!! A perfect example of how authentic street dance can do more than just entertain in the theatre setting.” – Crazy Smooth (artistic director of Bboyizm Dance Company)

King is honored to have received this special invitation from her beloved teacher Jacqulyn Buglisi to present her work in the WOMEN / CREATE! program. “KINGS” portrays the moving story of five, young African-American boys who unjustly made history as “The Central Park 5.” As minors, these young boys were wrongfully convicted of the brutal rape and assault of a white, female jogger in Central Park in 1989, spending up to 13 years in juvenile and adult prison. The mission of “KINGS” is to continue to bring light to this historical injustice, but rather represent these presumed “criminals” as five beautiful kings. This work, though choreographed in 2019, very directly speaks to our social climate in America today. It is an honest call for Americans to hold up a mirror to our society, undo the layers which disguise evident flaws, and drive this nation towards lasting change.

The original choreographic piece Island is a collaboration with photographer Roberto Dutesco. Mr. Dutesco created haunting images of the horses on Sable Island—horses, abandoned by shipwrecks, that have existed on the island without human intervention or interference. Taking its cue from the social interaction and imagery of these wild horses and what they represent as an increasingly rare natural phenomenon, the piece is a peon to the contrast between a confined existence and an unfettered, untamed state of being. Island Re-Imagined is the innovative adaptation of the original piece Island, combining the magnificent photos of Roberto Dutesco and the action of JMTW dancers seen through a lens of a layered digital treatment and effects that enhance the power and expression of the piece. Focused on a parallel between the wild horses confined to Sable Island in Nova Scotia as photographed by Roberto Dutesco and the response to the emotional experience of living in a Covid era, the piece echoes the sentiment of our times.

Six Feet Apart is a collaboration between choreographer Karole Armitage and engineer Agnes Fury Cameron, who created the sound environment. Armitage and Cameron met while Armitage was an MIT Media Lab Directors Fellow, and Cameron a student at the lab. The seven-minute work is performed by two dancers.

Armitage Gone! Dance is preparing for the Festival, (and other screen dance projects), during a month-long bubble residency beginning April 15. The company will revive and reimagine many works in a new iteration designed for the screen – works abandoned over a year ago as the pandemic set in. In Six Feet Apart, the dancers communicate and react to each other across a void. The dancers are rigged up with visible wires and taped-on devices – accelerometers, a type of on-body sensor, activated in real time to trigger sound in relation to a dancer’s individual acceleration and deceleration. Six Feet Apart will be rehearsed in a transatlantic process with Agnes Fury Cameron offering guidance from afar (she has returned home to the UK), as the company learns the technology required for creating the sound – a mixture of software, algorithms and hardware. The sound, originally planned for live performance, was designed to be heard over an audience’s personal cell phones. The small speakers convert the loud, industrial soundscape into a hushed and intimate experience, shared in a group context. We look forward to presenting the cell phone version at a later date.

WOMEN / CREATE! Celebrating the Innovation of Women in Choreography. Women choreographers have always been innovators of dance, and WOMEN / CREATE! A Festival of Dance celebrates their creativity and vision with its 9th annual New York City season.