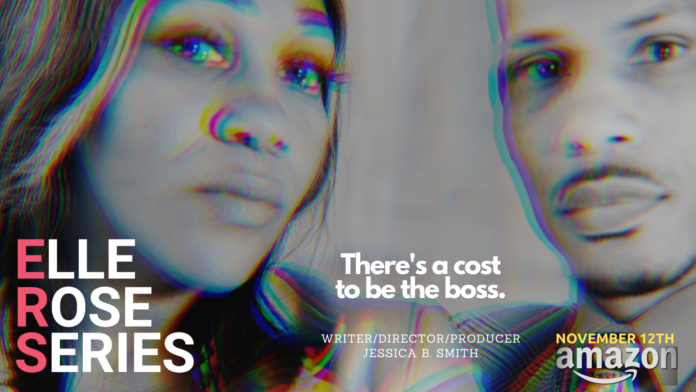 ( ENSPIRE She Did That ) Indie Filmmaker Jessica B. Smith Gets Greenlight from Amazon Prime

Jessica B. Smith is a mother and an upcoming indie filmmaker releasing her latest series, “Elle Rose,” on Amazon Prime. She was born in Bern but was raised in Sanford, eventually making her way to Cambell University, where she obtained a bachelor’s degree in criminal justice. However, her path took a different route after taking online classes from the National University in California to grow her knowledge in creative writing. After teaching literature, English, and creative writing in colleges, she decided to add “filmmaker” to her resume.

The “Elle Rose” series continues Jessica B. Smith’s previous project, “Elle Rose,” released in January of this year. “Elle Rose,” the series, focuses on newlyweds Elle Rose and Carter (played by Jessica B. Smith and Shaun McMillian), who have created software that can eliminate cancer. Unfortunately, the couple’s success is short-lived when the cancer industry argues there’s more money in treatment than finding a cure. Elle Rose and Carter soon realize that their project may end up costing them their very lives. Not only does this series focus on black love and excellence, but it also touches on the critical subject of healthcare. Jessica B. Smith wrote, produced, and directed the “Elle Rose” projects, which is impressive since she’s also a dedicated and loving mother to four children. This indie filmmaker is working hard to make her mark in the industry. Since they often portray black people in a negative light on TV shows and movies, it’s refreshing to see a filmmaker dedicated to changing this narrative.

ENSPIRE spoke with Jessica B. Smith about her “Elle Rose” series and her filmmaker experience.

Tell us how you got into independent filmmaking. Was it something you always wanted to do?

I kind of stumbled into filmmaking. I’ve always loved acting and was doing a lot of acting with my local theater. I overheard some theater friends talking about film acting gigs that they’d been a part of, and I asked them, “How do I get my foot in the door with the film world?” They suggested going the “background extra” route, which I did. I landed my first film gig (without an agent) as a parolee extra on TNT’s “Good Behavior,” which was filmed at Screen Gem Studio in Wilmington, NC. As soon as I had that experience, I knew this was something I wanted to continue being a part of. I’ve been a writer all my life, but I started off writing novels, which I have 2 published on Amazon, both urban romance novels (Confessions of a Diva and This Time is Forever).

I was working on my 3rd novel, “Elle Rose,” but got stuck writing it for three years. Then, one night, I had an idea to turn the book into a movie, which I did, and in 2 weeks, the movie had written itself. I let a few film friends read it, and they loved it. They told me I should produce it myself, and because I already had a network built through my film gigs, I reached out to people I knew, asking for help and guidance, and the next thing I knew, I had produced my movie, and I was headed to the theaters to watch my romantic-comedy movie premiere. It was an amazing experience. And after writing the Elle Rose movie, I still kept hearing more of the characters’ stories in my head, so I started writing again and ended up with a whole series. I decided to produce the series as well, and here I am now, just days away from the series premiering on Amazon Prime. It’s really just an amazing journey, from beginning to end.

How do you balance being a mother of 4 and a filmmaker?

It is so difficult being a wife and a mother of four. I will be honest and admit that I don’t always get the balance just right. What I love, however, is that my children are my biggest cheerleaders and my greatest fans. They are so understanding of what I do. How I try to balance it is when I’m working on a film, the film gets 100% of my focus. But when I’m spending time with the kiddos, they get 100% of my focus. So it’s more like, we don’t always get a lot of time together, but when we do have those moments, we make those moments matter.

Another thing I do is get my children involved in the filmmaking process as much as possible. For example, my oldest child, I use her as a production assistant on set and even use her as an extra in a few scenes. My younger 3, when they can be extras on set, I throw them in the scene as well. During the post-production process, I teach my children how to use the editing program, and I’ll even run certain scenes past my children to get their feedback on them. So getting them involved as much as possible helps with that balance as well.

What types of films do you typically create?

I love making romantic comedies. So even though the Elle Rose series is a drama, there’s a lot of comedic moments within it because I love making people laugh.

Would you say it’s hard for female filmmakers to make their mark in the film industry?

Definitely, the film world is a male-dominated industry, so you come into it fully aware that the odds are not in your favor. There are discrepancies in pay grades. Additionally, behind the scenes, the crew, it’s often male-dominated. But I don’t focus on that element of it. I focus on producing the best work possible within my field of expertise and showing those with whom I’m capable, reliable, focused, and I produce results.

Your new series, “Elle Rose,” is a drama that focuses on cancer. What’s the inspiration behind this?

However, curing cancer drives the storyline. The inspiration behind that is actually a clove of garlic. When I learned that a clove of garlic could cure an ear infection, eye infection, yeast infection, etc., and it can cure certain viruses, like the common cold and the flu, I couldn’t believe it. No doctor has ever told me that, and it made me wonder why. Why isn’t cancer cured by now? Why isn’t there a more effective way to treat cancer by now? I don’t know the answer, so I created one in the series, and I also created a cure myself–because hey, in the movies, anything can happen, right?

Many filmmakers create their films with a particular goal in mind, whether it’s to inspire, educate, or make someone laugh. What is your main goal when you create your films?

My main goal is to inspire, make you laugh, and make you wonder. One of my main aims is that viewers will look at the characters’ lives depicted on screen and use them as a mirror to look at their own lives. Another aim is to make people laugh. We all are living through this pandemic, and many of us are going through tragedies, sickness, the loss of loved ones, etc. So it’s good to take a break from the world and just laugh for a minute. The Elle Rose series will allow you to do this.

Do you have any advice for aspiring filmmakers?

Go make your movie! No excuse is a good enough excuse. When I started making the Elle Rose movie, I had no money. I offered my cast and crew IMDB credit, a little gas stipend, and food on set. The food on set was often cooked by friends and family members who were rooting for me. When I made the Elle Rose movie, I used recent film graduates who were ready to put their degrees and skill set to use. They weren’t worried about money. They were ready to get on set and start filming. You’d be surprised how many film people are out there who aren’t necessarily looking for money at the moment, but they want to build their film resumes, get IMDB credit and create or add to a reel of their work.

Secondly, if you’re serious about the film industry, you owe it to yourself to learn more about the industry and the craft. Watch educational YouTube videos and subscribe to channels, take online workshops/classes, read books. Invest in yourself! And trust that as you start making moves towards your goal (not a dream, but a goal), doors will begin to open for you along the way. Some doors don’t open by keys or codes. Some doors open only by proximity–if you get close enough to it, it’ll open itself.

What other projects are you working on, and how can others follow your journey?

I’m currently working on Season 2 of the Elle Rose series. I have another series that I can’t wait to start producing! It’s already written. It’s a 30-min comedy titled “Married on Paper,” and it’ll be coming up next. I also have three movies that I’m currently writing: two are dramas, and one is Christian comedy. People can follow me on Facebook by going to Officially Jessica B. Smith. They can follow the Elle Rose series by going to facebook.com/ellerosethemovie. And they can follow me on Instagram by going to instagram.com/jessicab_smith

Besides challenging the stereotypes of Black people on television, Jessica B. Smith is taking it a step further by showing them pursuing careers in technology. With software technology, we rarely see people of color being represented in this line of work. Jessica B. Smith challenges this new series to show that there’s a wide range of creativity in all races. Make sure you check out the premiere of the “Elle Rose” series on Amazon Prime on November 12, 2021.