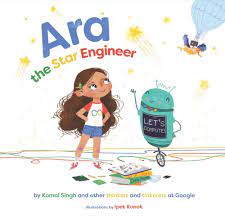 Komal Singh: a tech at Google by day, storyteller at night, and mom around the clock, has found a small but impactful way to challenge gender stereotypes. Her new illustrated children’s book, “Ara, The Star Engineer,” is “an inspiring, inclusive, whimsical way to learn about computers and technology from real-life trailblazers.” Singh has always been passionate about using technology.

Singh grew up in India and studied Computer Science at Delhi University. She later moved to Canada to complete her Masters’ degree in C.S from Simon Fraser University. She has a lot of experience in working as a software programmer with different tech consulting firms and is currently an Engineering Program Manager at Google.

The story follows Ara, who’s named after a constellation that contains seven stars, and her robot friend, DeeDee. Both of them go on a quest in order to find out how to count the stars. Their first stop is at the Innovation Plex, where Ara and DeeDee find experts to help them solve their quest. She meets Kripa, a problem solver in the Data Center, who tells her to have courage. She also meets Parisa in the Ideas Lab, who creates the algorithms that help computers solve problems with big numbers. The next stop is the Coding Center where Diane writes code that allows the algorithm to communicate with the computer.

When Ara and Deedee try to solve how to count the stars, they are met with an error. Ara then meets Maria, the troubleshooter, who installs more computing power with a new processor and memory chip. Success! Through meeting all these different experts, she learns that collaboration and teamwork is the best way to solve problems. At the end of the book is a glossary of technical terms, an introduction of the superheroes that Ara meets (named after real women), and a journal record of the steps Ara followed. Although the book is marketed for five to seven-year-old children, it can also be recommended for older children as well.

“Ara, The Star Engineer” was inspired by Singh’s four-year-old daughter, Araiya, when she saw her mother’s video call screen filled with men and remarked, “engineers are boys.” Singh knew she needed to combat this stereotype in her daughter’s mind. She enlisted the help of Ipek Konak, a former art director, and freelance illustrator, and created a fun, colorful, and inspiring book. This book can inspire a whole generation of young girls to pursue careers in STEM. All the women that Ara encounters are modeled after actual women that Singh works with at Google, all from diverse backgrounds. At the end of the book, Ara and DeeDee, and all the kids reading learn about more than just the algorithm of success, but also courage, creativity, coding, and collaboration.

Many women and men in STEM have positive feedback on Singh’s book. Geena Davis, the Founder and Chair of Geena Davis Institute on Gender in Media says, “We’ve always said ‘If she can see it, she can be it.’ With this story, girls can see leaders and be inspired to become one. A book for all ages and genders!” Women make up half of the world’s population, but only 15 to 20 percent of women are in the tech force. Representation and gender equality are so important, especially for young children, and if there aren’t enough people that have diverse backgrounds working together, then not nearly enough problems will be solved or design products for the world.

It’s not just kids who can read this story, but adults as well. Anyone at any age can learn about coding and having the courage to go after what interests you. This book has an inspiring message of chasing your dreams, taking risks, and collaborating with people, and everyone, even those not working in STEM, can apply that to their daily lives.

Singh wants kids, no matter their gender, to see themselves in her books. This book can act as a staple for young children to know they matter and their voices matter. Whether you’re a parent, sibling, extended relative, or just know a child that would love this book, it’s a small but important way to help children realize they can be anything they want to be.