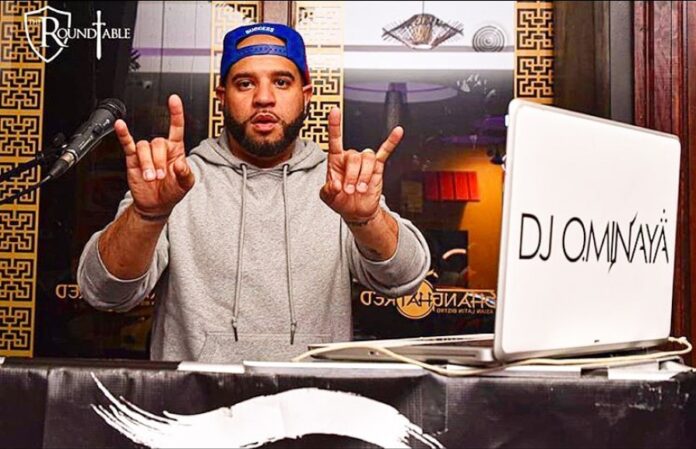 After growing up in the Bronx, DJ OMINAYA has always been surrounded by hip-hop, and it has influenced his career in celebrating the hottest music. At 14, he learned to spin and sought membership from East Coast legends like DJ Enuff, Kid Capri, and Brucie B. This mentorship allowed him to create his own blueprint for success and passion in the hip-hop industry.

From traveling on the road to being on Wendy Williams television show, featuring on Taste Radio, and bumpin tunes at popular NYC parties, DJ OMINYA inspires many in his community. He has been part of it all: providing services to weddings, parties, virtual events, brand ambassador programming, and sponsored posts. He recognizes the importance that music has had in his life and his biggest goal is to make others feel inspired by the power of music as well.

For DJ OMINAYA, music has always been his passion. It started from his childhood in the Bronx, where hip-hop was born. He says, “As a young kid I grew up listening to music in the mornings while getting ready for school. Music always set the tone for my day which led to me loving it. I learned to DJ at ‌12 years old and practiced every day. From there I started doing private events, nightclubs and playing in different venues around New York City. I continued to put the work in and perfect my craft and I eventually got more popular and the rest is history. Now you can hear me spin on television, radio, nightclubs and I tour globally. Music has always been a love of mine and is therapeutic for me.”

Although he loves what he does, that doesn’t mean there haven’t been challenges. He says, “As a DJ in a big city the challenge sometimes is trying to be unique with so many other DJs in the same area. But I was blessed with an ear for music and a work ethic that many can’t match so I found my lane and stuck to it. While Covid paused all touring and travel, there was a bright side for me as it helped revive other aspects of my DJ business. I relaunched my Crown merchandising line and could release new music with my Artist Koshi (@Koshi) and Bagstheboss (@bagstheboss) on my production company TTAJJGROUP.”

However, his career has been full of inspiring and fun moments that remind him ‌he loves what he does. He says, “My proudest moment thus far was being able to perform at some of the most iconic venues in New York City including Madison Square Garden, The Barclays Center, Met Life Stadium, and Citi Field Stadium when I headline with A Boogie Da Hoodie. Also, I take great pride in building a community on my Twitch morning show which led to making some real friendships during the pandemic when people were in times of need and an escape from the way things were.”

His favorite aspect about being a DJ is getting the crowd hyped and feeling the energy in the room. He doesn’t have any favorites in playing, he just loves getting people excited and happy on the dance floor. He says, “I just love music altogether. Engaging with thousands of people in the crowd at once is one of my favorite things to do because crowd control is a high I can’t explain. The energy is amazing!”

He has exciting plans coming up in the future. Keep a lookout for the new projects he will be a part of. He says, “My plans now are focused on doing more events and Koshi’s new album. We will drop the project this summer. His fan base is growing rapidly and we are excited! I will also drop more music as well with new merch pieces to go along with the new songs.”

DJ OMINAYA has advice for those looking to get into any kind of industry, whether it’s music, entertainment, or any kind of career you are interested in making. He says: “The best advice I can give is to never give up, work hard and stay humble. Consistent hard work gets results. Create a lane for yourself and stick to it. Build an organic following and watch it grow!”

His advice reminds us that with hard work and consistency, you can make a career out of anything that you love, so long as you persevere. He reminds us that finding what you love and sticking with it will lead to happiness, no matter what your passion is. It’s all in the journey and staying true to yourself.