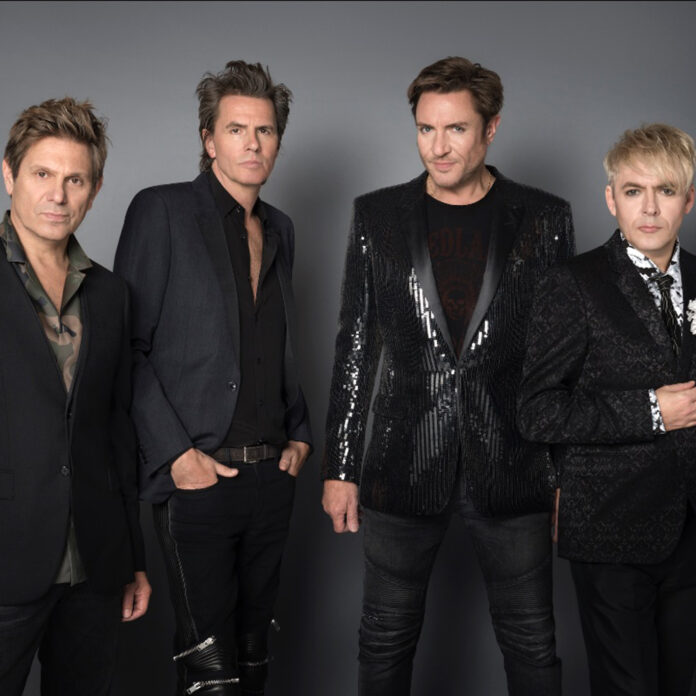 Duran Duran’s transcendent performance was filmed as part of a feature-length concert doc that will be released in cinemas in June 2022, before the band’s North American tour dates. The film will combine live performances with interviews with the four band members and behind-the-scenes footage shot on location in Los Angeles, celebrating the band’s rich and colorful four-decade career, and the release of their critically acclaimed new album, Future Past, and their upcoming tour dates.

During Duran Duran’s hour-long performance, the band dedicated a moment at the top of their multi-platinum single “Ordinary World” to the people of Ukraine, lighting a nearby building with the blue and gold of the Ukrainian flag.  This follows a number of recent initiatives where the band has encouraged their fans to support a campaign on JUST GIVING, to provide aid to mothers and children in Ukraine, and UNICEF: Children in Crossfire of the Ukraine Crisis.

“We are appealing to our fans in Russia to have an open heart and to support peace. We are all hoping you can get back to an ‘Ordinary World’“ said John Taylor.

The event was hosted by The Aster, a new Los Angeles members’ club opening in Summer 2022. Guests could preview the space while enjoying 360-degree views of Los Angeles during sunset hour. Once open, The Aster looks forward to hosting many more cultural moments to share with guests and members alike in its expansive 95,000 square foot building.

Situated in an impressive six-story 95,000 square foot building on the iconic Vine Street between Yucca Street and the famed Hollywood Boulevard intersection, The Aster members’ club and the hotel is conceived around the deeply held belief that the next generation of private members’ clubs will embody the warmth, welcome, and sophistication of the world’s best luxury boutique hotels. Launching in June 2022, this first-of-its-kind club will deliver a space designed to activate each member’s mind and body, where they can work, play, and stay, surrounded by robust programming in the heart of Hollywood. The project is curated and executed under the creative, and attentive care of award-winning Salt Hotels.

For more information on the Aster visit @theasterla and www.theasterla.com

Internationally acclaimed, multi-platinum and award-winning pop legends Duran Duran continue to break new ground and set new records with their signature sound and multi-generational following from all corners of the world. Renowned for their style and unfaltering love of new technology as much as their iconoclastic hybrid of post-punk, new wave, electronica, and pop, to date, their sales have eclipsed 100 million records worldwide. Among dozens of accolades and honors, they’ve earned two GRAMMY® Awards, two BRIT Awards (including “Outstanding Contribution to Music”), a staggering seven Lifetime Achievement Awards (including MTV VMA, Ivor Novello, BPI, and Q Magazine), and a star on the Hollywood Walk of Fame. Their catalog has yielded 18 American chart hits and 21 Top 20 UK smashes. They wrote a Billboard #1 James Bond theme and were the subject of a David Lynch concert film.