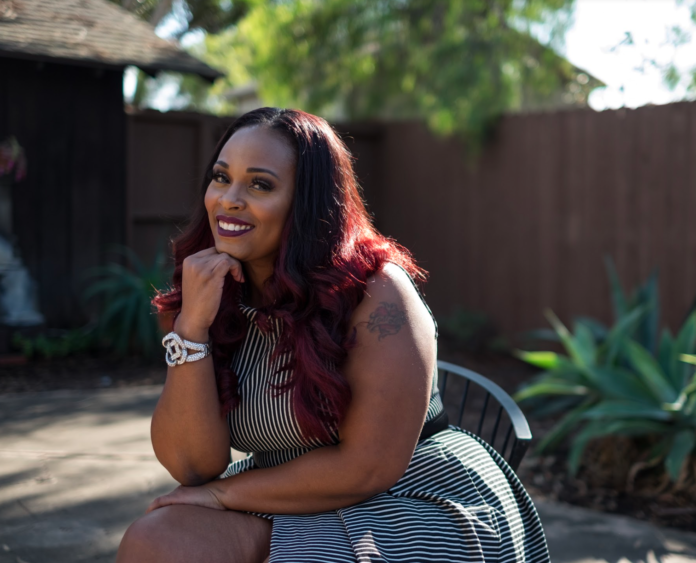 Brandee “Kurvy” J is dedicated to changing the world through her fashion and entertainment brand which comprises her multi-media endeavors, talk shows, speaking engagements, and brand consulting. She is a highly sought-after personality for fashion and entertainment. She is an ideal representative for brands who aspire to engage in the curvier market to make all sides of the industry more body inclusive. Brandee has done consultation work with many brands including Wet Seal Plus, Shimmer Boutique, and more.

Brandee “Kurvy” J is a self-acceptance advocate, multi-media personality, author, fashion editor, and highly coveted public speaker. She constantly empowers women to embrace the best versions of themselves through all of her brands.

Growing up, Brandee was the youngest of four children and was incessantly teased for being overweight by her peers and father. Her father nicknamed her Ms. Piggy due to her size. At the age of 10, her father decided that he wanted her to lose weight and put her on her first of many diets. From the age of 10 to 15, Brandee battled with eating disorders and attempted suicide twice. It wasn’t until she reached the age of 16 that she realized her body was beautiful and with the help of her grandmother, she came to accept herself.

With her self-esteem at an all-time high, it was further tested after Brandee gave birth to her first child at the age of 21. Seeing her body changing affected her in a number of ways. Dealing with her lack of confidence was a hard battle she had to face while simultaneously being in a physical and verbally abusive marriage. After two years Brandee J got the courage to leave her abusive marriage and rebuilt herself into the woman she is today.

Recognizing the need to kick down barriers as a plus-size woman, Brandee “Kurvy” J is always on a mission to make being a proud “Kurvy” woman mainstream. In 2012, she launched her Kurvy Life lifestyle brand designed to demonstrate to women that they can be classy, sexy, and elegant no matter what size. “It’s about walking with your head held high and looking glamorous doing it!” says Brandee J. Brandee. “Kurvy” J is a businesswoman on the rise in the fashion and entertainment industry and her brand only continues to blossom. In 2015, Brandee J did the unthinkable, not only did she start the first-ever plus-size fashion week during New York Fashion Week titled “NYFW Plus,” but she also took the knowledge she gained from the plus-size industry and launched the very first upscale luxury publication for plus-size women called Luxe Kurves Magazine. In 2016, she launched the “Brandee J Talk Show” which is currently airing on three networks including Nu TV Atlanta on Channel 28, and is seen in other countries such as Canada, Australia, and Europe.

She has interviewed celebrities, fashion designers, and models and has covered the hottest events such as the Amber Rose Slut Walk, VH1 Black Ink New York Premier, BET Experience, Summer Soul Fest, and more. Brandee “Kurvy” J has taken her “Breaking Barriers Drive” to the entertainment industry by showcasing that curvy women belong in front of the camera of mainstream media. She strongly believes that representation is important so that people of the same body type can be recognized on all platforms. Brandee has interviewed a number of celebrities such as MC Lyte, Tank, Marques Houston, Chrissy Monroe, Rah Digga, Lil Mama, BIA, and the list goes on. Breaking down barriers for plus-size women is Brandee “Kurvy” J’s mission in life and she intends to keep pushing toward that goal.

Watch an interview with Brandee J on ABC News where she discusses “The Brandee J Show” and her mission to change how mainstream media perceives Black women in the media here.