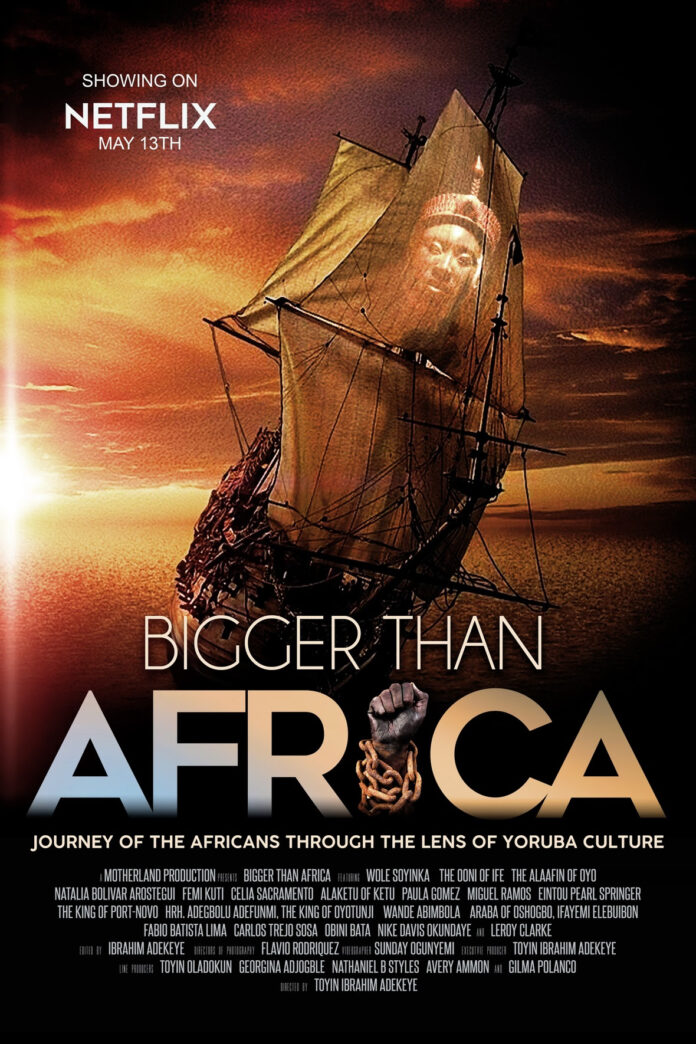 Netflix announced the acquisition and premiere of the compelling documentary “Bigger than Africa” by African Filmmaker, Toyin Ibrahim Adekeye. The new documentary dives into how the cultural tradition and the religion of the Yoruba’s of West Africa survived the transatlantic slave trade and remain the most prominent African culture in the New World.

Bigger Than Africa documents the journey of enslaved Africans through the lens of these surviving West African cultures. This historical documentary takes you through 6 countries, Brazil, Cuba, Nigeria, Trinidad & Tobago, and The United States, and back to where it all began in West Africa. The well-researched documentary will expose the international audience to how Yoruba culture transcends continents and connects the Black diaspora.

“I am extremely excited that my first project was picked up by the global streaming network. This film provides a fresh and innovative perspective into the history of our ancestors that aren’t typically represented in mainstream Hollywood. My hope is for this film to become a unifying documentary for all people of African descent irrespective of their countries. It’s a film that uniquely tells the stories of our commonalities rather than our differences,” said creator and filmmaker, Toyin Ibrahim Adekeye.

In fact, the influence of Yoruba culture is reflected in many of today’s art, fashion, and religion, and even in world-leading artists’ music such as Beyonce, Micheal Jackson, and Spike Lee, who have directly or indirectly showcased Yoruba culture in their art forms.

Toyin’s vision is to expose the preservation of the Yoruba culture across the diasporas on a global scale. The film was produced by Motherland Productions with the participation of the New York-Based Management Agency EGMNY.

Toyin Ibrahim Adekeye is described as an artist with an eye for detail and a passion for perfection. The Nigerian-born Los Angeles-based director is the founder of Motherland Productions Inc. Toyin is a product of both The Los Angeles Community College LACC and the Los Angeles Film School Hollywood.

Bigger Than Africa documentary just acquired by Netflix will be his first feature film. The film has screened at film festivals worldwide, winning multiple awards & earning prestigious screening invitations from venues like The United Nations and The Schomburg Center for Research on Black Culture amongst others.

“When the Slave ships docked in North America, Brazil, and the Caribbean, hundreds of cultures, traditions, and religions landed with Africans on board. One transcended slavery beyond imagination to remain alive till this day in the new world; the culture of the Yoruba’s.” Historically the Yoruba controls one of the largest empires of West Africa before colonization. Their empire spread across today’s Nigeria, The Republic of Benin, and The Republic of Togo, and their culture could be said to have survived the arduous plantation life for hundreds of years.