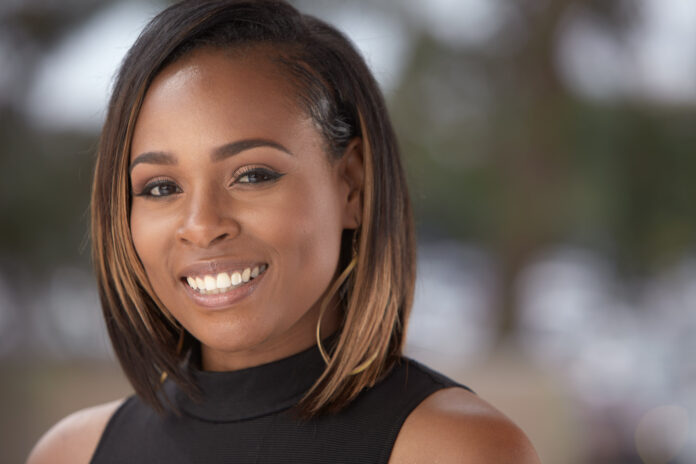 ( ENSPIRE She Did That ) From Barriers to Beauty Ideals, Brandee J Breaks More Than Just Glass Ceilings

Multimedia personality, author, entrepreneur, fashion editor, and self-love advocate Brandee J is on a mission to empower and embolden women to embrace what makes them unique. From launching the first-ever plus-size fashion week during New York Fashion Week called “NYFW Plus” to creating the first luxury lifestyle publication for plus-size women called “Luxe Kurves Magazine” Brandee J is paving the way for long-overdue change in the fashion industry. As the host of the Brandee J talk show and the creator of multiple networking events for female entrepreneurs, she is using her platform to elevate other strong, successful women and break down long-standing barriers across multiple industries. The root of all of her accomplishments is her core philosophy, “If you tell me I can’t do something, I’m going to show you that I can.”

Brandee J’s journey as a self-love advocate was inspired by her own struggles with body-image and self-esteem in her formative years. Nicknamed “Ms. Piggy” and put on a diet at the age of 10 by her father, she battled with eating disorders and attempted suicide twice. “I grew up wishing I had been born prematurely like my younger sister to be skinny like her,” she says.  It was her grandmother Sarah Jane, who she describes as a strong, confident, curvy woman, that helped her embrace and love her body. She instilled in her a confidence that she wants to spread to other curvy women, which is why all of her initiatives are rooted in promoting self-love.

After battling to find a lifestyle publication that represented her, Brandee J founded Luxe Kurves Magazine in 2015. “There was nothing that showed the lifestyle of a curvy woman. Nothing that said, ‘I’m proud of who I am.’ Yes, I have these thunder thighs, but I love who I am, and I love the finer things in life,” she says. “This is who I am, so there must be other women out there who feel the way I feel.” What separates Luxe Kurves Magazine from other body-positive publications is being a lifestyle publication. “We show that just because you’re curvy, it doesn’t mean you don’t love to travel, you don’t have relationship issues, you don’t have political concerns about what’s going on in the world.” Unlike traditional lifestyle publications that tend to favor fun, light-hearted content, Brandee J wants to tackle important issues like the battles of single motherhood or the experience of living as a person of color in the U.S. “We don’t sugar coat anything,” she says. “Readers say it’s refreshing to see honest people write about how they feel and not try to fit in with what everyone else in the media is doing.”

Recent years have seen the fashion industry make strides in embracing body diversity, which is owed to Brandee J launching NYFW Plus in 2015. Despite a lack of funding and a lack of support from the industry and mainstream media, she was determined to pull it off. “In order to get the respect we deserve, we had to do it during the actual New York Fashion Week to say we deserve to be here,” she says. The show was entirely self-funded, with Brandee J’s mother investing her father’s life insurance money to ensure the show could go on, and it made history. “It should not be, ‘oh my god, they’re finally using plus-sized models.’ It should be the norm,” she says. “Not everyone in America is a size six or zero. I think it should be mandatory that models look like real women.” While Brandee J is grateful that more and more designers and publications are using plus size-models, she believes there is still a long way to go.

The Brandee J Talk Show is rooted in that same desire to represent real women, especially women of color. It’s the reason the show was picked up by Ova Media Group, a network that gives a voice to those marginalized by traditional media. Brandee J recalls the words of Cassandra Cooper, the network founder, who told her, “You relate to every woman. You look like us. You talk like us. You just have a bigger platform because you created your platform.” Brandee J has interviewed countless celebrities, business owners, and other successful public figures, with the core mission of humanizing them to her audience. “I really wanted a show that talked about people’s journeys, their struggles, how they overcame them to inspire people,” she says. “I feel like we have this facade that these celebrities are not human, when in reality they cry like we do, they go through pain like we do.” She also serves as a role model for young women and girls. “Let’s show that little black girl, that little Latina, that little anyone that you can look like me and be on this platform.”

Brandee J has launched a series of networking events aimed at empowering female entrepreneurs and celebrating black womanhood. Together with her business partner, fashion designer Kisha Waters, she launched the Bosses Brunch in 2018, which was attended by congresswoman Maxine Waters, a fearless and outspoken advocate for women, children, and people of color. “We wanted to do something together to show people that two black women in their fields of fashion and media can work together, and there’s no competition,” Brandee J says. “It’s about showing women that we need to come together and empower one another. We are greater together than we are apart.”

Looking forward, Brandee J will be publishing her book, “Unshakable Curvy Confidence,” which has been in the works for the past three years. She will also be launching her plus-size swimwear line, S Jane Swim, named after the grandmother that gave her the confidence she carries today. “My brand is based after my grandmother, an outspoken curvy woman who didn’t take no shit from nobody. She lived her life how she wanted to, and that’s how I think all curvy women should be,” she says. “It’s going to be a swimsuit line that embraces plus-size women and shows that we are stylish, we love to have fun, and we can rock a two-piece and be just as confident and sexy.”

As someone who has broken barriers in multiple industries, Brandee J has one piece of advice for her fellow women. “You will always have people telling you what you can and cannot do. You just have to brush it off and keep going,” she says. “Find your purpose because you’re going to go so much further. That purpose will be your drive and the fuel to your fire.”

Renneè Hubb On Inspiring2Live and The Importance Of Impact Over Popularity