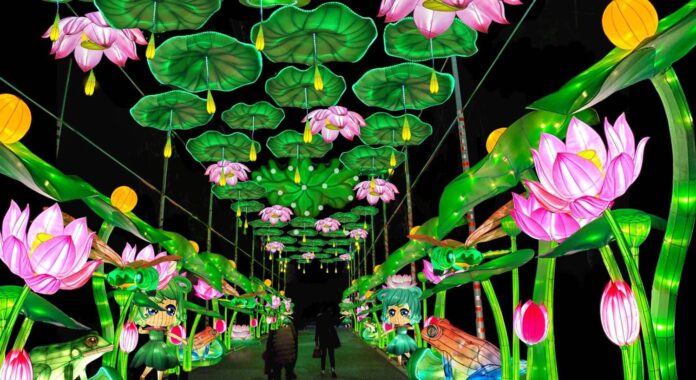 Tianyu Arts & Culture, Inc. (Tianyu) has made a name for itself by being the largest lantern festival producer in North America. With this title, the company has hosted over 62 festivals in 32 cities across North America. Established in 2015, Tianyu has enabled its 4.5 visitors to experience the beauty of Chinese culture and its use of technology to create lanterns at its festivals. Along with the presentation of the lanterns, guests also experience live performances and Asian cuisine that is offered by Tianyu.

In 2022, Tianyu will host more than a dozen festivals across the country, specifically in Philadelphia, PA, Reno, NV, Palm Desert, CA, and many more. With one of its goals being promoting conservation and eco-conscious practices, Tinayu had a special event on April 22 to celebrate Earth Day. The theme of this festival was “Invest in Our Planet ” and it highlighted using reusable lanterns and introduced fun educational facts on endangered species. Tinayu’s passion for wildlife has allowed them to pair up with parks and zoos around the country to design lanterns that feature the beauty of nature. Birds, mammals, reptiles, and fish inspire some of its lanterns; especially animals within these families that are currently endangered. Festivals, such as the one that happened on Earth Day, serve to deliver messages across the country concerning protecting wildlife while showing what these species ‌offer to the Earth.

With this Earth Day show, Tinayu is promoting its organization’s mission of creating a more sustainable world. In its shows, its lanterns demonstrate stories and provide educational insight on sustainability that is inspired by nature and the environment. In the past, Tianyu has worked with the National Museum of Natural History in Paris to create two environment-themed exhibitions known as the “Endangered & Extinct Animals” in 2018 and “Ocean” in 2019. The first exhibition featured animals that went extinct and animals that are now endangered because of human activity. Some of the endangered animals featured were polar bears, coral, sharks, golden monkeys, and sea turtles. The exhibition, “Ocean”, represented creatures living in oceans across the globe. The purpose of this event was to represent the biodiversity of the Earth’s oceans with Tinayu’s creative and unique lanterns.

Along with the Earth Day event that happened in April, Tianyu has also hosted previous events in 2021 that were attended across the country. Their event in North Carolina made a large impact with many visitors coming to see the lantern show. At the North Carolina Chinese Lantern Festival, over 200,000 visitors arrived, which set a new record for the company. Tinayu has grown to become popular in North Carolina, with this being the sixth show in that state. At the Florida Zoo and Botanical Garden, the attendance tripled to 98,000 from 2019 to 2021.

Tianyu Arts & Culture, Inc. has allowed people across the world to experience and become knowledgeable about the Earth’s ecosystem in a creative and interactive way. With colorful and carefully crafted lanterns, Tianyu has allowed visitors to experience mammals, reptiles, and natural habitats in a new way that encourages people to pay closer attention to how they can become more eco-conscious in their lifestyles and see the extent of damage that can occur through human activity. The inspiration behind Tianyu’s light shows comes from the beauty of the wildlife that we are constantly surrounded by.

To learn more about Tianyu and upcoming events, check out its site here. Also, check out Tianyu’s Instagram, @tianyuartsculture, to see media from past events.