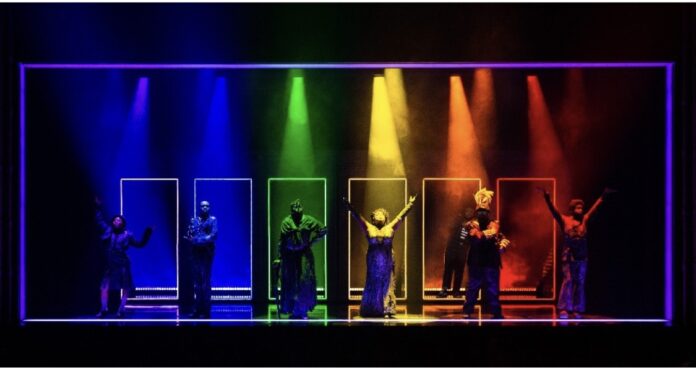 Winner of the Tony Award for Best Musical, A Strange Loop, is filled with an impactful story, talented actors, great singing, creative costumes, and set. With the book, music, and lyrics written by Michael R. Jackson, this Off-Broadway musical shows a young artist figuring out personal desires and identity.

Usher, the main character of the show, is a young artist who is a Black, Queer writer who is writing a musical about a Black Queer writer writing a musical about a white queer writer. In the show, Usher’s musical becomes known as A Strange Loop to demonstrate what is like to travel in a Black and Queer body. Not only does Usher describe the struggles and pressures of being a Queer and Black man in society, but he touches upon real-life struggles such as student loans, Black pride, discriminatory actions within the gay community hopelessness within oneself. Some powerful songs that brought up these issues included “Inner White Girl” and “Exile In Gayville.”

While bringing the audience’s attention to real-life issues, the musical includes upbeat music that makes the audience want to sing along, allowing it to win the Best Musical at the 75th Tony Awards. At the event, it was up for 11 nominations, including and also won Best Book of a Musical. With a fantastic cast and production, this show is a must-see for witty and inspirational entertainment. The cast is filled with talented Black actors such as Jacquel Spivey who plays Usher and was nominated for the Tony Awards for Best Performance by a Leading Actor. L. Morgan Lee, who played Thought 1, received a Tony Award for Best Featured Actress in a Musical and is the first transgender person to be nominated for a Tony Award.

Along with the cast, there was also a talented creative team behind this musical including the director Stephen Brackett who has directed other musicals such as The Lightning Thief and Be More Chill. The Choreographer, Raja Feather Kelly, incorporated “pop and queer culture” into the musical to support its main theme. Arnulfo Maldonado was the set designer who created the innovative and original set. Montana Levi Blanco was the costume designer who incorporated multiple patterns, colors, and styles to fit the role and personality of the character within the musical.

To learn more about A Strange Loop and purchase tickets visit here.

Nelly and Ludacris’ VERZUZ Recap: How it Went “Down Down Baby”