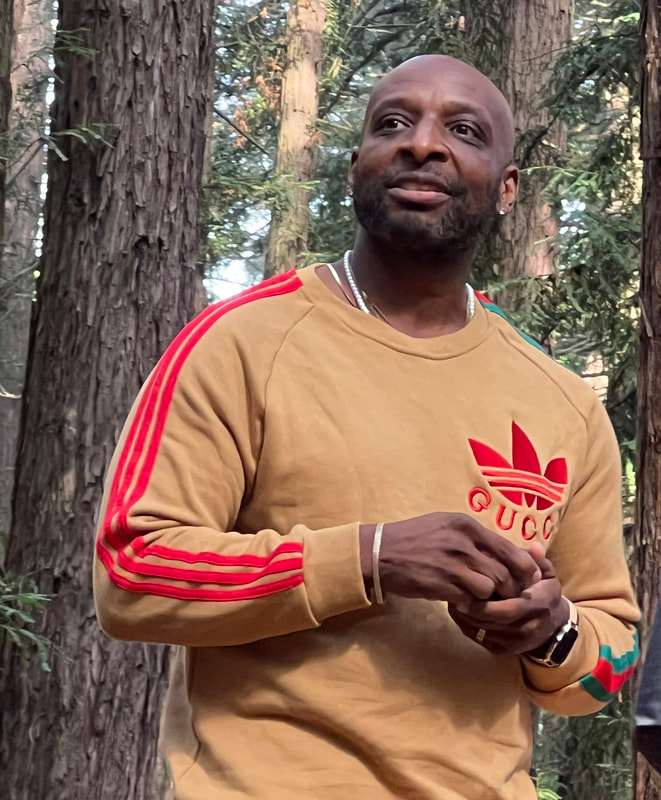 Johnson is a film director, and producer based in Oakland, California. He has written, directed, and produced a combined nine short films that have been in 75 film festivals worldwide. He also worked on some projects in the Bay Area including “Sorry to Bother You”, “Blindspotting”, and Netflix’s “Girlboss”. Johnson’s recent project “T.H.O.T?” was in 13 film festivals and won in two of them.

Johnson is also the Director of Tree Planting for Common Vision. Common Vision is an Oakland non-profit. Common Vision works with schools to cultivate and educate edible gardens. The company helps the Oakland community to learn about healthy food options, the importance of trees, and how to access free food distribution.

ENSPIRE spoke with Jayson Johnson about his journey and style as a filmmaker.

When/ where did your passion for filmmaking begin?

I’ve always had a love for cinema dating back to my childhood when I was a certified couch potato watching up to ten hours of TV a day. I loved the acting, transitions, and dialogue but never knew this was a career path, but knew I wanted to be close to it.

So when I left to go to college, I took up Communications with a concentration in Radio/TV/Film. There I worked as a cameraman, teleprompter operator, and technical director but none of these positions had the same allure as the TV/film shows I watched growing up. I felt stuck without knowing a way out…Then out of the blue; I had time to produce a low-budget film.

It paid no money; we stole our locations and ate bargain basement pizza every day, but I loved it! From that moment on I knew I was going to be a filmmaker or die trying. Later on, I scoured Craigslist ads finding other films to work on learning the tricks of the trade as I went along. After a few years of this, I learned enough that I started getting opportunities to work for more renowned filmmakers like Francis Ford Coppola, Boots Riley, Terry Zwigoff, and others.

What is your creative process when creating a film?

My process always starts with music. I like to start by asking myself “what music would this character listen to and why?” By asking myself this question I’m able to get into the mind of the characters I’m writing. It helps me to know how they’d dress, how they’d talk, and even how they’d interact with others. For example, I just finished writing a counterfeit wine drama (“Counterfeit Cabernets”) and one of the main characters, Asian Rick, is a bald, mustached gangster who loves listening to NWA. Rick’s persona is wild, brash with notes of I don’t give a f*ck sprinkled on top.

Who has been your biggest inspiration in creating your filmmaking style?

I feel this answer deserves two parts because trying to become a legit filmmaker is so hard. So I’m always listening to motivational tapes to keep me going. The filmmaking journey is one that can beat you down with a constant stream of “No’s” so you have to keep yourself pumped up with greats who’ve managed to overcome monumental odds to massive success. Some of the people I’m listening to now are Steve Harvey, Les Brown, Tupac, Eric Thomas, and Tony Robbins.

As for my film style, I’m kinda an old head when it comes to cinema. I love the pacing of Martin Scorsese’s films, the overall direction in Francis Ford Coppola’s projects, the color and vibrance in Spike Lee’s projects and the suspense Alfred Hitchcock was able to produce in his classics. But those are just the tip of the iceberg… I’m always watching new films, TikTok, YouTube, and Snapchat for new trends or interesting ways to capture media. I think inspiration is all around us and as a creative, it’s up to me to be an everyday student taking in the interesting and unique arts of the present.

What has been the best piece of advice you have received in the industry?

The best advice I received was from Terry Zwigoff who told me to always be myself. He explained there are a lot of directors out there who try to mimic others by recreating their signature shots. When he explained this to me it made a lot of sense. I’ve spent a lot of time on the film set working with other directors who said things like “I want to do a quick zoom like Tarintino!” or “let’s do a symmetry shot,  like Wes Anderson.”

That’s when I can’t control myself… it’s happening… a hard eye roll. Ugh! After having too many conversations like this I decided to stop producing other director’s projects and just concentrate on making my own films with me at the helm.

Your role with Common Vision sounds important and impactful. Can you tell us a bit about your work there?

I’m the Director of Tree Planting Operations at Common Vision, a climate justice non-profit based out of Oakland, CA. In my role, I oversee all of our large-scale community plantings in disadvantaged communities. We are currently working off of the largest CalFire grant awarded in California history to plant 5,000 trees in San Leandro which neighbors East Oakland. While film is my first love I do appreciate the opportunity to right the wrongs of redlining and getting trees in areas that have been historically overlooked. When I see young kids helping to plant I can’t help but feel good about what we’re doing for generations and now and future ones to come.

By any chance will you be merging your skills and work at Common Vision mission in a film project?

I wish but right now Common Vision needs my organizational skills to ensure our community plantings run smoothly. That said we do have a video series Common Vision started during the pandemic called Mama Wanda’s Garden School that another talented filmmaker oversees.

While Common Vision’s mission is amazing, is the end goal for you to become a full-time producer?

Yes! I can’t deny my true passion in life and that’s to become a film director. There’s just something about filmmaking that gets me excited. I love being on the set working with the other filmmakers and talent with the opportunity to make something really great. So while I’m employed at Common Vision I spend my off time networking, writing, and looking for opportunities to make more films. In fact, later today I have a couple of producer meetings to pitch my projects,  “R.O.G.E.R & Me” and “Counterfeit Cabernets”. It’s basically like working two full-time jobs: one of them keeps the lights on while the other fills your hopes and dreams.

Jayson Johnson’s dream is to continue to pursue the life of a filmmaker, creating pieces that people everywhere can enjoy and love. He hopes to soon be able to commit to filmmaking completely in the future.