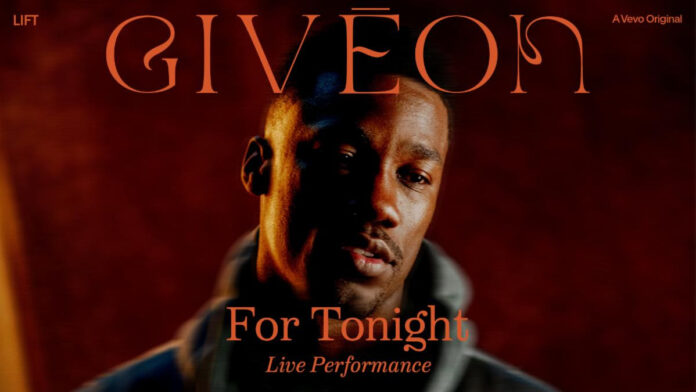 Vevo, the world’s leading music video network, today released Givēon’s first performance and second video in his LIFT series, “For Tonight.” Givēon released a Vevo Footnotes of “For Tonight” to kick off his LIFT campaign last week, and has previously worked with Vevo as a 2020 Artist To Watch.

“After the success of his Artists To Watch performance videos back in 2020, we were excited to have the opportunity to work with Givēon again,” says JP Evangelista, SVP of Content, Programming and Marketing, Vevo, “Givēon is an incredibly talented and collaborative artist who was key in shaping this ambitious creative. We are thrilled to have him join our stellar lineup of LIFT alumni and to release this content.”

Vevo and Givēon closely collaborated to create a tasteful, futuristic world that perfectly compliments the feel of “For Tonight.” Shot in LA, Givēon stands in front of a breathtaking cityscape, his rooftop surroundings slightly weathered but standing strong. The rooftop holds a stone structure with light radiating within its center, brilliantly amplifying “For Tonight’s” lyricism.

Anyone can be an artist, but very few can be remarkable. Givēon’s biggest fear is being like everyone else, but he shouldn’t be concerned. From his captivating baritone voice to his pensive lyrics and colorful soundscape, Givēon defies not only musical standards but expectations on how he should be as an artist as well. Always having an affinity for music, he fell in love with songwriting before singing, eventually leading to poems and rap. It wasn’t until Givēon discovered that his voice wasn’t as ugly or awkward as he originally thought. Instead, it was his Frank Sinatra-esque signature-that everything came together for him.

Vevo is the world’s leading music video network, connecting an ever-growing global audience to high-quality music video content for more than a decade. Founded by Universal Music Group and Sony Music Entertainment in 2009, Vevo offers fans a worldwide array of premium content to choose from. They showcase official music videos alongside a constantly developing lineup of live performances and innovative original programming. From superstars to rising new talents, Vevo brings cross-promotional support to artists across the musical spectrum, at every stage of their careers.

Vevo has evolved over the past decade to lead within today’s ever-changing media landscape, embracing partnerships with a number of leading distribution platforms to deliver extraordinary content within ad-supported environments. With more than 26B views across television, desktop, and mobile devices each month, Vevo brings music videos to the world when, where, and how fans want them.