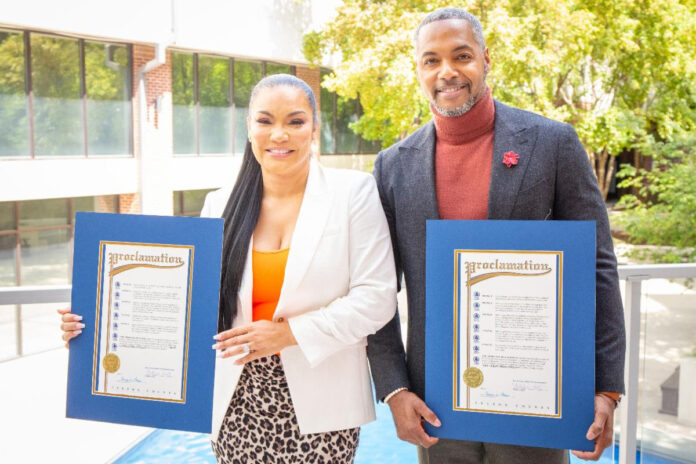 The City of Atlanta publically honored Egypt Sherrod and Mike Jackson, the husband and wife duo behind the hit HGTV show for their career and philanthropic achievements. Fulton County Commissioner, Natalie Wood presented each with an individualized proclamation in recognition of their individual and collective accomplishments.

They held the outdoor ceremony at the brand new IWI Fresh Farm Spa, a Black-owned business in West Midtown Atlanta. Two of the duo’s three daughters, Kendall (10) and Harper (3) joined them at the event to witness the public acknowledgment of their parent’s years of hard and meaningful work.

Before joining her husband to create Married to Real-Estate Egypt Sherrod and Mike Jackson were no strangers to the HGTV audience. Sherrod first appeared on the channel in 2007 as the host of Property Virgins and then shared the spotlight with her husband as a guest star on Flipping Virgins. After both appeared as judges on the second season of Rock the Block, the network was certain that the two needed to host their own show.

The pair’s authenticity and charisma are infectious and attract viewers with ease. On HGTV’s Married to Real Estate, Sherrod and Jackson work with homeowners to make their real estate dreams a reality by finding them properties in their dream neighborhoods. The show also showcases the couple’s personal life and touches on the resourceful ways that they approach work/life balance. The first season of the show attracted over 19 million viewers, earning it a season 2 renewal. The second season is scheduled to premiere early next year (2023).

You can watch the first season of the couple’s debut solo collaborative project, Married to Real Estate now on Discovery+. Keep up with the pair by following Egypt Sherrod and Mike Jackson‘s respective Instagram accounts.