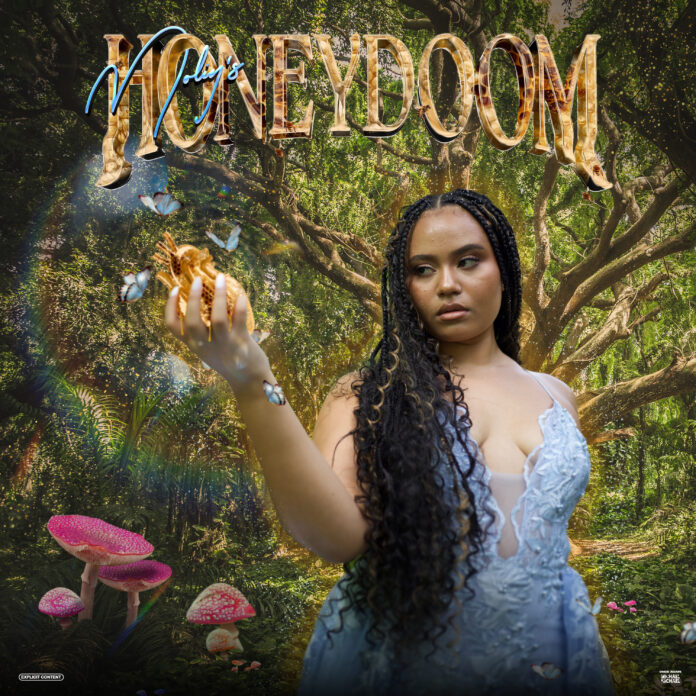 Rising sensation and Ghanaian songstress Moliy released her highly-anticipated EP “Honey Doom” on October 19, 2022. The eight-track project is a follow-up to her mini-EP “Mahogany St,” released in April 2022. This is Moliy’s first full release since 2020’s “Wondergirl,” which cast her into the spotlight with the track “Sad Girlz Luv Money” featuring Amaarae and Kali Uchis. To date, Moliy has amassed nearly 250 million streams. “Honey Doom” contains some of her most personal storytelling. She relives her development as a young woman, unpacking love and relationships. She also details her own experimental journey with sound, which remains otherworldly, airy, and optimistic, while also expanding globally.

Back in February, Moliy teased the project with the single “Love Doc.” PAPER Magazine described it as, “smooth, effortless, tender and bewitching…an easy, glistening single that captures a moment in her life when she was heartbroken.” Moliy flexes her growing expertise, experimenting with her rap flow alongside Moonchild Sanelly, who is known for her major contribution to Beyonce’s “Black is King.”

The first track features the legendary Ghanaian-British producer Juls, a pioneer in African music. He is known for his work with Burna Boy, Mr. Eazi, and Stonebwoy. The upbeat and honest “Freak” is a standout. It is the story of a young woman confronting her demons and the toxicity of her past relationships, as she softly sings, “won’t be a punching bag just because you can’t communicate…I’m not your freak anymore, got put on the floor, you probably should have acted right, cold to the core.”

“Wondergirl” was highlighted on BBC News This is Africa and Apple Music, while it topped Billboard charts and led to Moliy’s membership in the Recording Academy Class of 2022. Due to the popularity of “Sad Girlz Luv Money,” she was featured in Spotify’s Equal Africa campaign, which led to her appearing on a Times Square billboard. Her track “The Place” was included in Apple Music’s 2022 Juneteenth Freedom Songs playlist. She was the only African artist featured alongside other artists like 6LACK and Lupe Fiasco.

Altogether, Moliy strives to establish herself as a pathfinder among the new group of female singers in a mostly male-dominated industry. She hopes to open the door to other women in music throughout Ghana. “They need to know there is no limit to what we can achieve, regardless of our background,” Moliy says. “I would love for all women to feel confident and empowered, even on the saddest and hardest of days.”

Watch the “Freak” music video below: