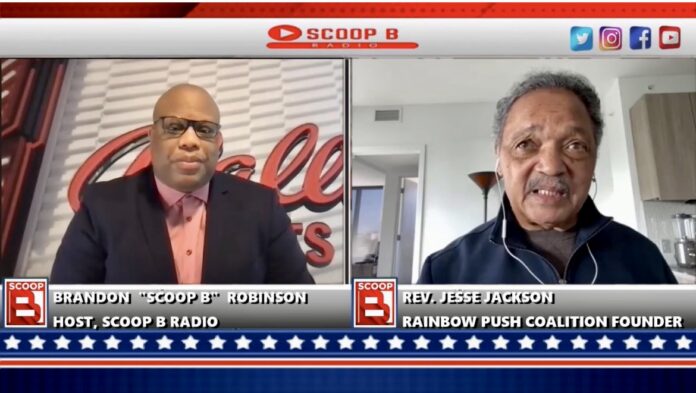 ( ENSPIRE Entertainment ) Brandon ‘Scoop B’ Robinson Sits Down With Rev. Jesse Jackson the Founder of Rainbow Push Coalition to Talk About LeBron, Jordan, and More

Scoop B radio was launched in 2016 with a mission to deliver dope content covering sports, lifestyle, and entertainment. The channel is a platform where Robinson’s unconventional interviews are featured with a mixture of guests including Dallas Mavericks owner Mark Cuban, Pete Sampras, and DJ Khaled. In this recent interview, he spoke with Reverend Jesse Jackson about voting rights, the GOAT debate between LeBron James and Michael Jordan, Kayne West, and Rihanna’s Super Bowl appearance.

ENSPIRE recently covered Robinson getting ready for the next season of his show on the Spotify Live app. He is the current National Basketball Analyst for Bally Sports Network and his radio show has reached over 15 million streams. One of his most notable credits is to ESPN’s The Last Dance which he curated branded content.

His latest interview features Reverend Jesse Jackson who is the founder of Rainbow Push Coalition dedicated to making the American Dream a reality for all citizens and advocating for peace and justice around the world. Rev. Jackson was awarded the Medal of Freedom in 2000 by President Bill Clinton and has received over 40 honorary doctorate degrees and frequently hosts lectures at Howard, Yale, Princeton, Morehouse, Harvard, Columbia, Stanford, and Hampton.

Robinson asked Rev. Jackson for his take on the way the NBA handled Robert Sarver, who has been recently been under investigation for using racial slurs and for mistreating female employees.

“Yeah. He has no right to own that team. He has no moral authority. You don’t have to play for a man who has those kinds of beliefs and that kind of track record, so I think that they had to do in their own hats. When those conditions exist and also you could hear it in his voice, you can’t do well in that situation. It’s transparent with the unfair rules of the world,” said Rev. Jackson.

They also spoke about LeBron James and his dedication to playing for so many years.
“Well first, he’s kept his body in shape. So many guys cannot take or withstand the long haul. He’s an amazing guy. Didn’t go to college but he sounds like a bonafide man of peace with a Master’s degree. He speaks with authority; he’s a family man with a stable family, speaks with

articulation and he carries himself in a way that makes you proud. Some guys don’t know the difference between celebrating and ‘clowning’ — there’s so much clowning in some of those celebrations; he does his little things with his powder and that’s it. I think that we should never compromise dignity for the moment. When they touch down they start gyrating; I don’t think none of that is a good thing. We do our best and when you pass or drop the ball over your shoulder, act like you’re used to it or that you’ve done it before, you know what I’m sayin’? LeBron James to me is a solid gentleman,” said Rev. Jackson.

Later on in the interview, Lebron was brought back up to get to the bottom of who the Reverend thought was the GOAT, LeBron or Jordan.

“C’mon man. Michael Jordan is the best. I saw him win 6 titles in a row and struggle to get that winning combination when he was coming up. I’m a little biased though because I saw Michael play so much and plus he’s an Omega Man so I’m a ‘little’ biased about that one [laughs]. But I’m not sure it matters. Bill Russell said, ‘How can you compare someone and they haven’t even played against each other?‘”

“You’re comparing how much they won. How can you compare [Wilt] Chamberlain to Jabbar? They played against each other. You have to compare the likes. So Michael was the best player in his day. LeBron is the best in his day and both guys did well on and off the court. Michael helps a lot of people and so does James building schools in Akron, Ohio; it doesn’t get any better than that,” said Rev. Jackson.

In the interview, Robinson asks about Rev. Jackson’s take on Kyrie Irving and Kayne West, two celebrities who are both always in the spotlight for something controversial. He also spoke about his excitement for Rihanna’s halftime show in this upcoming Super Bowl.

You can watch the full Scoop B interview with Rev. Jackson below!

In Effort Of the Fight Against Coronavirus Spotify Now Allows Fans...