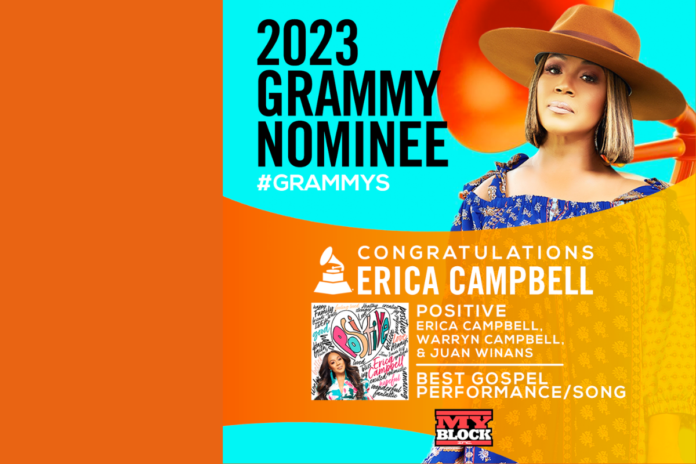 Erica Campbell has just received a coveted Grammy Award Nomination for the 65th Annual Celebration for her single “Positive”. The multi-award-winning recording artist was nominated in the “Best Gospel Performance/Single” Category. Created via My Block Inc. Records and SRG-ILS Group, “Positive” was released in March and charted #1 on both Billboard’s Gospel Airplay chart and Mediabase Gospel Radio Chart for 9 consecutive weeks.

The lyrics were written alongside Juan Winans and Warryn Campbell who also produced the song. The lyrics encourage listeners to be reassured that God is in control even in uncertainties. Erica’s response to the nomination is modest and sweet: “I am humbled and grateful for this Grammy Award nomination. I am excited that the intention to shift the mood and energy to a “Positive” one was embraced and felt. I look forward to the biggest night in music, and to joining the company of my peers. Congrats to the other nominees!”

“Positive” is one of the singles in her new upcoming full-length album. The release date will be scheduled for March 24th, 2023. The 65th GRAMMY® Awards will air on CBS on Sunday, February 5, 2023.

Philip Smallwood Has Historic Art Exhibit at the Butler Institute