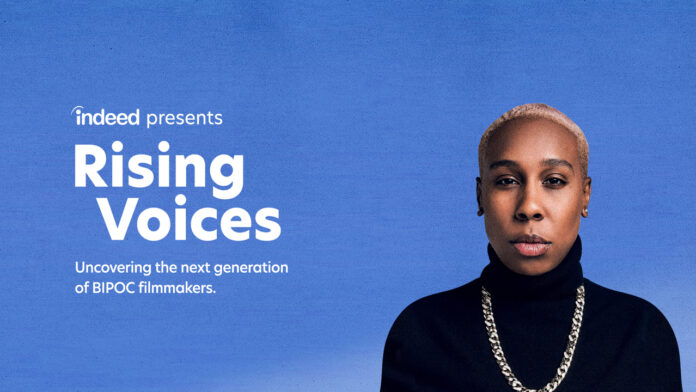 Indeed, the world’s number one job site, actor Lena Waithe and her company Hillman Grad, and 271 Films announced the ten filmmakers taking part in season three of Indeed’s Rising Voices. They created the program to uncover, invest in, and share stories created by Black, Indigenous, and People of Color (BIPOC) filmmakers across the US. These stories are set to tell diverse stories around the meaning of work, and that jobs create opportunities and better lives for all. Each filmmaker will premiere their short film at the Tribeca Festival in June 2023 covering the theme, Future of Work.

“We are thrilled to continue this special partnership with Indeed to support diverse filmmakers,” said Lena Waithe, Hillman Grad Founder, and Rishi Rajani, Hillman Grad CEO. Creating a space for the voiceless or not much seen is a vital part of building better communities and educating society. This partnership between Indeed and Lena Waithe is looking to create a norm for BIPOC filmmakers across the country. We at ENSPIRE commend these actions and looks forward to 3 more seasons of this amazing collaboration.

“This year marks season three of Rising Voices, and we are blown away by the amazing talent featured in this class and we can’t wait to see the intentional stories they will bring to the screen. We look forward to working with these amazing filmmakers and providing them with everything they need to succeed.”

Here are this year’s filmmakers:

Ana Verde is a Puerto Rican and Venezuelan filmmaker. She is currently in post-production for her short film Te llaman las olas, a co-production with Puerto Rican production company Filmes Casa, which she wrote and directed. Ana is a 2022 Orchard Project Episodic Lab fellow (The Orchard Project), a 2022 WAVE Grant Recipient (Wavelength Productions), and her monologue Play the Sun was a finalist for the 2022 Ya Tú Sabes Monologue Slam (Nosotros Org & NBCUniversal). She is incredibly excited to form part of Season 3 of Indeed Rising Voices with the Hillman Grad Foundation. For the past four years, Ana has worked in artist support at the Sundance Institute disbursing grants to artists working in fiction and nonfiction across various mediums.

Candace Ho is a Taiwanese American filmmaker based in Los Angeles. She received her BA with Honors from UCLA’s School of Theater, Film, and Television with a concentration in narrative directing. Her work explores mental health, womanhood, coming of age, and feelings of “otherness” and loneliness in an increasingly isolating world. She is a 2021 Armed with a Camera fellow, a 2021 DB Frieze LA Fellow, and a two-time Wavelength Production WAVE Grant Finalist. Her short films have screened at festivals across the country, including Los Angeles Asian Pacific Film Festival, San Diego Asian Film Festival, and Asian American International Film Festivial.

Hannah Bang is a South Korean writer/director who loves stories about complex and imperfect people. Hannah’s work covers a wide range of forms including an ensemble theater play Prodigy for the Hollywood Fringe Fest, a sponsored short film Ripple Effect that was shot using StageCraft, and a collaboration feature project Voodoo Macbeth which had a theatrical release.

Bang is a Jon Chu scholar and a recipient of the James Bridges and Jack Larson Directing Scholarship at USC and the Entertainment Technology Center Innovative Technology Award. She is also a 2022 Project Involve Fellow. Her latest short film Expectant is scheduled to have its premiere screening this year, and she is currently developing her first feature film Husk. Her work has been screened at festivals such as SXSW, Palm Springs IFF, and Cleveland IFF, and has been hosted by online platforms such as Vimeo Staff Pick and DUST.

Jackie! Zhou is non-binary and ageless. They are a Los Angeles-based artist, director, and sound designer keen on blurring the lines between formats and disciplines. Embracing maximalism, their style leans towards heightening the absurd while staying grounded in real emotions. This work has led them to document an all-girls competitive robotics team, perform John Cage’s Water Walk at the Walt Disney Concert Hall, and teach as an artist-in-residence at UC Davis.

Recent work includes the interactive documentary FaceTime, produced by POV Spark and NFB, and “thumbnail,” a work-in-progress experimental play. Their sound work has received a Primetime Emmy nomination, a MPSE Golden Reel, and the 2021 Tribeca X Award. Most recently, they performed in Free Solo: The Musical in the role of Jimmy Chin. Above all, they believe good listeners make great storytellers.

James Rogers III is an award-winning writer, producer, and director from Compton, California. He tells stories that center otherness in deeply imaginative (often fantastical) worlds, showcasing the magic of inner-city opulence that inspires him to create and audiences to dream. He has written and produced Emmy-nominated content for Disney+, Showtime, Netflix, Amazon, and more.

Before storytelling, James directed a literary summer school in South LA, worked on Capitol Hill during the Obama years, and nearly became a lawyer alongside his father. James graduated from USC’s Peter Stark Producing MFA Program; his thesis project “Felix” is an award-winning animated short that screened across various festivals. James loves planning murder mystery parties and roller skating and knows more about Pokémon than anyone should.

Her short film IN THE SILENCE addressed sexual assault from her personal experience and was selected for dozens of film festivals and exhibitions worldwide. With a Film & TV BFA at the Central Academy of Drama, Joey was funded by the Chinese Scholarship Council to study at American Film Institute. Joey wants to tell stories that promote awareness for marginalized minorities and explore themes of females, family, and death.

Born in South Korea and raised in LA, Justin has lived and worked across Latin America, Europe, and Asia. He graduated from Wesleyan with an honor degree in Film and American Studies and currently spends his time between Brooklyn and Seoul. He is interested in the intersection of fiction and nonfiction, of ethnography and speculation, and diaspora and homeland.

Larry Owens is a multi-hyphenate artist whose work has appeared prominently in the arenas of theater, television, film, comedy, and music. Training: The School at Steppenwolf. Larry is ecstatic to be making his directorial debut with Indeed, 271 Films, and Hillman Grad Productions.

María Alvarez is an internationally recognized Cuban-Dutch filmmaker. She graduated from the University of Southern California with a BFA in Film & Television Production. Her films have screened at dozens of festivals such as the Los Angeles Film Festival and Cleveland International Film Festival, won awards from institutions such as Google, and screened in museums like MoMA.

She worked as a Director’s Assistant to Benedict Andrews on “Seberg,” starring Kristen Stewart and shot by Rachel Morrison. She is in the festival circuit with her latest short film, ‘did i look cuban then?,’ which premiered at the 2022 Santa Barbara International Film Festival and was nominated for Best Documentary at NFFTY. She is currently in pre-production of her next short, ‘Last Days of the Lab.’ María is now a freelance director and photographer in the narrative, music video, and commercial space.

Miguel Angel Caballero, the son of Mexican immigrant farmworkers, is an award-winning Queer Mexican-American/Chicano writer, producer, and director. He received his bachelor’s degree from the school of Theater, Film & Television at UCLA. His latest short film, ‘Acuitzeramo,’ premiered at the Morelia International Film Festival. It won 21 awards, including ‘Best Short’ at the Imagen Awards and ‘Best LGBTQ Short’ in the American Pavilion at the Cannes Film Festival.

His previous film, ‘Broken Sunflower Hearts,’ was named by Remezcla Magazine as one of the year’s Best Short Films by US Latino Directors. He’s an Outfest Screenwriting Lab Fellow, Film Independent fellow, and the Warner Bros Discovery 150 Artist Grant recipient. Miguel Angel is co-founder of Cabaldana Alchemy, a company whose mission is to create working-class U.S. Latine stories from an LGBTQ perspective.

Indeed’s investment in Rising Voices helps provide filmmakers with a budget of up to $100,000 to create a short film. As part of the Rising Voices initiative, filmmakers also receive mentoring and guidance from veteran filmmakers: Lena Waithe, Destin Daniel Cretton, Diego Velasco, Anthony Hemingway, and more.

The filmmakers will also be compensated $5,000 for writing and $5,000 for directing. This season, Indeed, Hillman Grad Productions, and 271 Films are hosting a Filmmaker Bootcamp in Los Angeles, where filmmakers will meet Indeed CEO Chris Hyams, Hillman Grad CEO Rishi Rajani, 271 Films founders, Constanza and Doménica Castro, along with mentors who will help refine program scripts.

The City of Houston Transfers Confederate Monument to The Houston Museum...