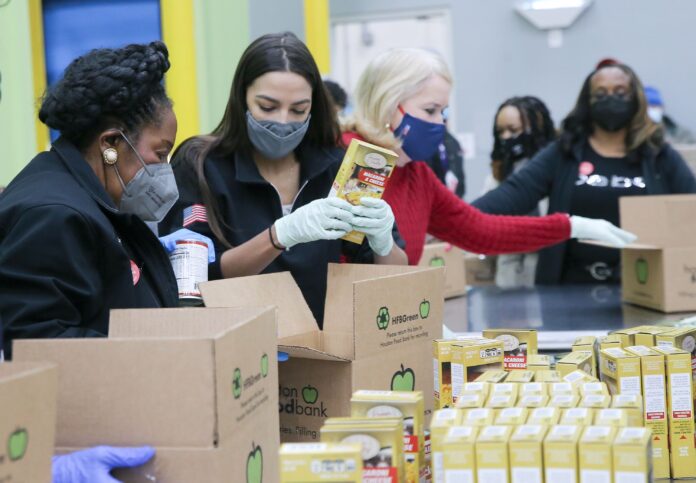 Democratic NY Rep. Alexandria Ocasio Cortez, also known by her initials AOC, has raised $4.7 million in her fundraising efforts to help Texans who have been impacted by the winter storms. The New York Representative launched her fundraiser on Feb. 18 after the extreme weather conditions caused the Electric Reliability Council of Texas (ERCOT) managed power grid failed, leading to widespread blackouts and a boil-water advisory for the majority of the state. Within a day, the fundraiser reached $1 million and within 12 hours, it had risen to over $2 million.

The next day, AOC posted that she would be flying to Texas to help distribute supplies, stemming from an invitation from Texas Rep. Sylvia Garcia. The congresswoman then flew out to Houston on Feb. 20 to distribute supplies, visit food distribution centers, water delivery sites and tour the devastating damage done to the area. While visiting, Ocasio-Cortez along with Texas Reps. Sheila Jackson Lee and Garcia joined together for volunteer shifts at the Houston Food Bank to help pack disaster relief boxes of food and supplies.

Her press secretary, Ivet Contreas, confirmed to CNN that nearly $5 million had been collected as of Sunday evening. CNN also noted that this is Ocasio-Cortez’s first major fundraising effort and disaster site visit apart from her previous efforts related to the on-going COVID-19 pandemic. The politician says her relief efforts are helping families across the state who have been hit hard by the winter storms and are facing long-term setbacks.

“You already have so many families in the state and across the country on the brink that they can’t afford an emergency to begin with,” Ocasio-Cortez said. “This can set people back for years, not just days.”

In a press conference, Rep. Jackson-Lee acknowledged how the economic challenges both the coronavirus pandemic and the continuous environmental disasters the state has faced affect lower-income Houstonians and Texans of color disproportionally compared to the middle class or well off families, according to the Houston Chronicle.

“A lot of vulnerable people, essential workers, marginalized people, a lot of documented and undocumented, they are our residents, they are our brothers and sisters,” Jackson-Lee said. “We know so many of them suffered hardships even more than I imagined.”

Ocasio-Cortez will continue to accept donations until the need has passed, which will more than likely run for over several weeks. To donate, you can visit this website.

A Small Town in Groton, Mass. Comes Together to Support Victims...

Zeke Thomas Seeks to Encourage Others by Sharing His Story