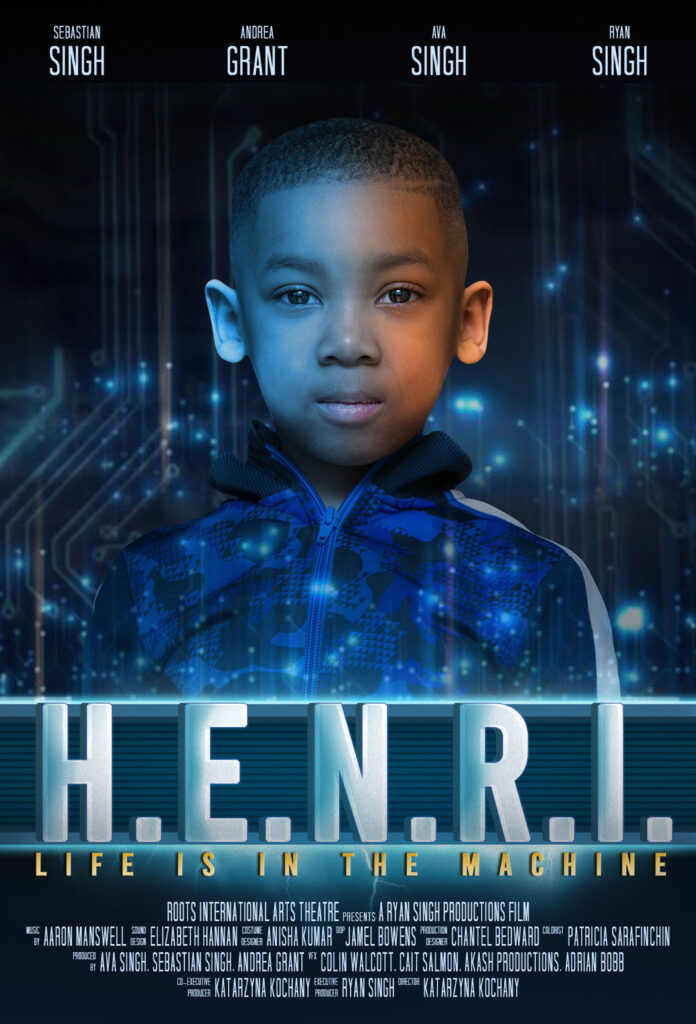 Award-winning Guyanese-born Canadian filmmaker Ryan Singh debuts H.E.N.R.I., a science fiction film premiering at the Toronto Black Film Festival on Feb. 10-21. Singh wrote and stared in H.E.N.R.I with his two children and believes being able to empower his children and diverse voices is a blessing.

Being of mixed heritage from Guyana, Singh was interested in stories that reflected the world around him. He identified with his Black, Indo, Amerindian, and Dutch heritage and became influenced by diverse stories and films. He watched Indian and Chinese movies at nearby theaters mixed with Hollywood stories. Singh’s first love was acting, and his African playwright father would bring him on stage to enjoy African dancing at the local town hall.

Migrating to Canada, Singh dreamt of more opportunities and got involved in local community stage productions. One of his favorite acting roles was his performance in a short film, “Mr. Crab,” and saw the film as a love letter to his Caribbean culture. His travels soon took him to South Africa, Sri Lanka, and Costa Rica to follow his acting and documentary ambitions. Singh attributes a lot of his visual and photographic style to his exposure abroad. Most notably, Singh highlights his memorable role in “Downsizing,” directed by Alexander Payne and as a videographer for the animated film, “The Breadwinner,” directed by Nora Twomey and produced by Angelina Jolie.

Singh’s passion for diverse storytelling continued, and so he began producing and directing theatre and film. Through his company Ryan Singh Productions Ltd, Ryan’s works as a performer, creator, or technician have shown on CityTV, Global TV, CTV, and Rogers TVPlanet Africa in Canada, ABC, NBC, FOX, CBS, Netflix, and Amazon, in the US, as well as several notable channels across the Caribbean. In 2006, Singh also formed the not-for-profit organization Roots International Arts Theatre Incorporated, which produced more than six productions in Canada and Guyana.

As a director, Singh has worked with such projects as “Curse of Ham”, “Sweet Sweet Karaila”, and “Sex, Relationships and Sometimes…Love” for the stage. In addition, Ryan directed for Obya Entertainment the talk show pilot “All Out”, web series pilot “Unharnessed”, which received an O’Brian Award nomination for Outstanding Broadcast, and “Fried Bakes and Dumplings” which won an Audience Choice Award at Jamaica’s GATFFEST. He also co-directed the short film, “I Rasta”, which was nominated for Best Short Film at the Reggae Film Festival in Jamaica.

In April 2013, Singh produced an intimate and personal short autobiographical documentary titled “Mom.” The short tells the story about a man who reflects on the tradition of absent fathers in his family and how he wants to break the trend as he prepares to be a father. The film featured his real-life mother and wife and won Best Short Documentary at the 2013 Caribbean Tales International Film Festival.

H.E.N.R.I. will premiere at the Toronto Black Film Festival on February 10-21 and comes on the heels of Singh’s 2020 award-winning documentary, “Memento,” a South African “Artventure.” The idea for H.E.N.R.I. came about from Singh’s observations of his children’s relationship with Google Home and Alexa. The film follows the story of a 7-year-old boy after the tragic loss of his father and how he looks for answers from his artificial intelligence communicator. Both actors themselves, his 6-year-old twins Ava (Tall Boyz and Handmaid’s Tale) and Sebastian (Suits, Handmaid’s Tale, and Silent), performed in leading roles with their father.

Like many of his fellow filmmakers, 2021 brings a heightened awareness of changing times and the urgency to empower the voices of people of color to take ownership of their stories. 100% of the cast of H.E.N.R.I. was BIPOC, and a significant majority of the crew and visual effects crew was BIPOC or Women. Singh’s upcoming projects include feature films and a slate of television projects, including a children’s program developed through the BIPOC Kids TV Writing Bootcamp.

Singh’s impressive accomplishments as an actor and filmmaker continue to grow and empower underrepresented voices to tell their stories. The filmmaker’s choice of projects and stories, along with the diverse community he chooses to work with, illuminate him as a trailblazer. His passion and perseverance, including his commitment to staying rooted in his identity and background, are influential to upcoming talents. Singh leaves us with a candid thought about the urgency and drives to achieve his goals in the face of an extremely tough, and at times, non-inclusive industry. “There are so many stories I want to tell that have an immediacy. I can’t wait for others to make them.”