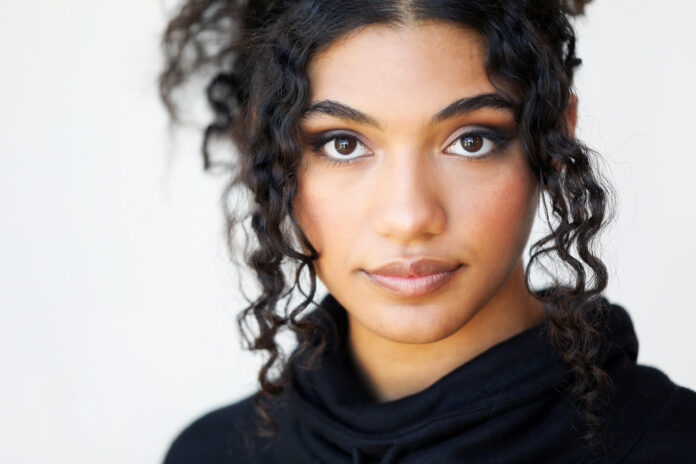 Dior Goodjohn is a 15-year-old on-the-rise actress, singer, songwriter, and dancer from Santa Monica, CA. When it comes to being in front of the camera, this is far from a new experience for this young lady. Her journey first began as an infant modeling baby socks for an Old Navy campaign and by age 3, she took part in JC Penney and ABC Mouse commercials. These opportunities soon led her to roles on “Glee,” “Raven’s Home,” and “The Unicorn.”

While quarantine caused life to come to an abrupt halt, Goodjohn didn’t let this stop her from devoting her time to strengthening her craft and recording many self-taped auditions a day. Goodjohn’s determination paid off when she received a request for an audition and got a regular role on the upcoming reboot series of the 1980s comedy “Head of the Class,” which will feature original cast member Robin Givens. The series revolves around overachieving high schoolers who face a teacher, Alicia Gomez (One Day at a Time’s Isabella Gomez), that challenges them to embrace excellence in life rather than just academic achievements. Goodjohn will star as Robyn Rook, a snarky, sarcastic quick-witted gamer, who is the unauthorized leader of her debate class and immensely cares for her friends like a loving parent.

ENSPIRE spoke with Dior Goodjohn about her upcoming series plans.

What drew you to the role of Robyn Rook?

At first glance, she’s just a snarky teenage girl who enjoys playing video games but there’s a flipside to her, one that she doesn’t show often, but is a key component of who she is.  She has a hard exterior but on the inside, she’s kind, playful, and caring. It was that opposing side of her that made me want to know more. I wanted to see how vulnerable she could get and who she truly was if she was willing to open up. That’s one part of it. The other part I believe to be divine timing. There’s been so many auditions for girls similar to Robyn but none had her depth. My intuition led me towards her and I could not be more grateful that I trusted it.

Your character, Robyn Rook, is a leader who seems to have a nurturing characteristic about her when it comes to her friends. Is your character the oldest group member, or is she just mature for her age?

I believe Robyn is a freshman. The cast and I only really discussed what grade our characters were in once or twice on set, but I remember us all being pretty stoked about it because they cast high school to play high school, which rarely happens. And while we were filming the pilot, I was still in my freshman year of high school.

As you’re probably aware, many people in quarantine faced many mental health issues as they attempted to adjust to the new normal. It was hard for people to remain productive and motivated during this stressful time, especially with many people facing unemployment. So how did you motivate yourself to record multiple self-taped auditions a day during this stressful time?

I had just started my freshman year of high school. I felt like I kind of knew who I was to a certain extent and I was never better. However, once quarantine hit, things changed fast. It was a very hard time for everyone around the world. I never really enjoyed auditioning, no one does, but I figured if there was any time to work as hard as I could, harder than I had already been working for the past nine years of my life, it was now. I had always wanted this more than anything in my life and regardless of me being an A-type of personality and not expecting mediocrity for myself; I had never had higher stakes than when quarantine started, so that pushed me to get real with myself to realize that I wasn’t really giving all that I could and once I put in that extra strength it gave me hope to keep pushing forward.

Here at ENSPIRE, we love to hear about the positive things others are doing for their communities, and you have a strong passion for giving back and helping the needy. So how do you give back, and what inspired you to do this?

I have been able to witness homelessness in various countries firsthand. It was a real wake-up call because it allows me to take a step back and truly see that I have been going through life given all the tools that I needed while others had to get by without them. I have seen children my age and even as young as two years old frail with pale skin, dirty clothes with holes in them (not because it’s a style) washing car windshields at red lights for $.50 a pop put things into perspective. It is important whenever I see people suffering in these communities especially when it hits so close to home that I take action. Whether that be providing the tools necessary directly to the children in those communities or working with shelters to raise awareness, seeing those kids’ faces light up when the universe gifts them these tools, urging them to revive, is priceless.

You’ve been writing songs since you were very young and have been inspired by very well-known singers such as Etta James, Whitney Houston, and Billie Eilish. What genre(s) of music do your songs fall into, and what do you hope listeners will get out of your music?

Though I’ve been doing music for quite some time, I feel I’m still finding my sound which will inevitably grow and change as I grow and change. However, the music I’m writing currently would fall under Neo-soul/Pop. When I was younger, I told myself I was going to write the biggest pop record in history. (High aspirations for an eight-year-old, I know). So, I would sit myself down and try to write something simple catchy, and fun. The majority of the time I went in with those intentions, and the simple breezy pop song would turn into a crazy specific run-on sentence.

Over time, I learned to work with that instead of fight it. Now I write music for myself. It helps me make it through traumas that may go on in my life whether they’re big or small. It’s self-expression, it’s meditation, and it allows me to become aligned with my higher self and who I’m truly meant to be. My music is very personal to me, I make it a point to tell a story with it. The main goal is to release and for my music to find a collective of people who may be going or have gone through similar traumas as I have and make them feel something. It doesn’t matter what it is but as long as my music can invoke emotion within people and possibly help them heal, I’m happy.

What do you hope for others to gain by watching your career journey?

Home and peace.  Anyone that comes across my work along this journey should know that they have found sanctuary. I want everyone to feel connected as if we’re family because that’s what we all are at the end of the day.

You have a Shih Tzu chihuahua nicknamed Chi Chi, which is short for Chicago. How did you come up with this unique name?

We got Chi-Chi from my uncle, who lives in Rockford, which is just outside of Chicago. I wanted to name Chi-Chi “Chip.” But since she was born practically in Chicago, we decided to name her after the windy city; it just fit right.

Robyn is the savviest person when it comes to the Internet; however, Dior is not. Bahahahahha. I’ve never really been good at the social media thing, but that is the best way to keep up with me. I’m trying to be more consistent about posting and getting all my platforms in shape. So we can go on this journey together. My handle for any of my social media accounts is @dior.n.goodjohn; right now, I am on Instagram and TikTok.

Dior Goodjohn shows that by having a strong passion, persistence, and determination, you can succeed in whatever your aspirations are.  In addition to this, she offers that to succeed in life, you cannot allow life’s unexpected obstacles to get in the way of your goals. Goodjohn is currently working on releasing her first album by age 18 and shows no signs of stopping. Be on the lookout for her in the HBO MAX series “Head of the Class,” which will premiere on November 4 this year.