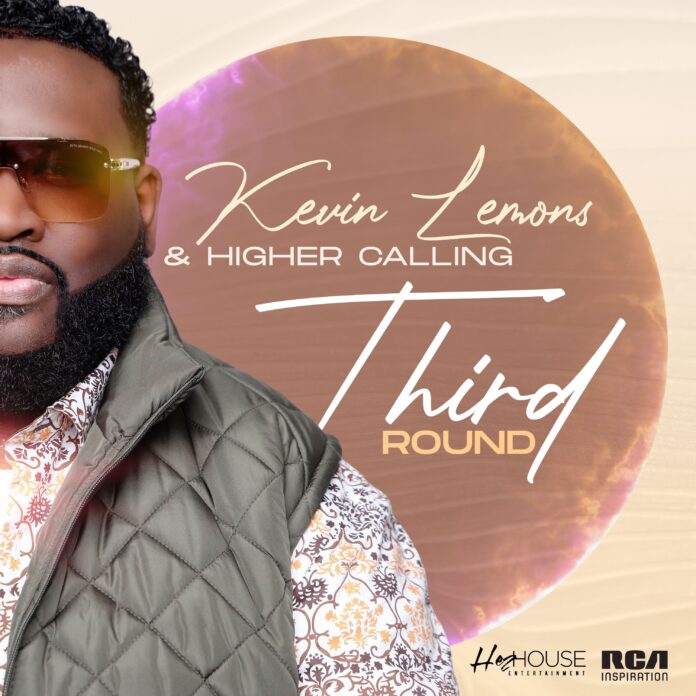 Kevin Lemons and Higher Calling have been a staple in the Gospel music industry for the past 25 years. They’ve shared the stage with gospel legends like Kirk Franklin, BeBe Winans, Donald Lawrence, and others. Their previous two albums, Destined for Greatness and The Declaration, were critically acclaimed. On the Billboard Gospel chart, The Declaration peaked at number 10. With the release of their new album Third Round, they are commemorating their 25th anniversary. Third Round is a compilation of choir songs that reflect the enjoyment of going to church on a Sunday morning.

“This is a feel-good record,” Lemons told Good Day Atlanta. “It is our third live recording in our home of Atlanta, but it is a little different because we wanted to focus on the feel of Gospel music…how you felt when you walked into the church and heard the choir singing, and how that resonated in your spirit…the joy that singing brought to you.” Released on HezHouse Entertainment/RCA Inspiration, Third Round is available everywhere digital music is sold.

ENSPIRE Magazine had the opportunity to ask Keven Lemons a few questions about his inspiration and album.

Would you mind sharing with me the background and history of Kevin Lemons and Higher Calling?

Sure! Higher Calling was founded in 1996 when I was 16 years old. We were initially called “Kevin Lemons and The Higher Calling Community Choir.” It was only supposed to be a one-time gathering of friends singing at my father’s Wilbert Lemons “Solo Review” musical.

The concept for the musical was to imitate a Gospel choir or group. I chose Kirk Franklin and the Family. To my surprise, we pulled it off. We sounded decent, and the audience gave us good reviews. With my parents’ blessing, we kept the group going.

How and when did you know Gospel Music was your calling?

I was reared in the church, but I didn’t feel like this was my initial calling. I’m not like some of my peers who say, “I knew God called me because I was in church all my life, and I heard the Lord’s voice saying I have work for you to do in the kingdom!” That’s definitely isn’t my story. I was a bad kid that was always in trouble..lol.

However, I come from a lineage of choir directors. My grandmother, Annie Ruth Lemons, was the founder and director of the Atlanta Masonic Choir, which was formed in 1942. The torch was passed to my uncle Bobby Character, and then my father took over once he completed his service in the Air Force.

I was thrown into the Gospel arena. But I loved music! I feel like music was my calling from birth. My dream was to become a famous drummer, tour with R&B bands, and see the world. But at the age of 12, my father fell ill. He had several strokes and underwent open-heart surgery. So, like any good son, I stepped in and helped my father direct the Atlanta Masonic Choir. This was when my parents both learned that I could sing and teach. That’s how I got my introduction to Gospel music.

Who in your life has been your most significant influence with pursuing your career as a gospel artist?

My father. Once I started assisting him, everything he did I wanted to do.

Sunday Music is a tradition for most African Americans, and Hezekiah Walker is one of those singers on heavy rotation in our playlist. How did you become an artist on his label? And what’s that pressure like, working with such a successful name in the Gospel Music Business?

That’s a loaded question! Bishop Hez is definitely one of the G.O.A.T.S. The first time I worked with Bishop Hez was during the How Sweet the Sound tour in Atlanta. Dr. Ricky Dillard opened the door for us to be the house choir, and we opened up with Bishop. We continued to be the house choir for How Sweet the Sound for another two years after that event. A few years later, Higher Calling was invited to be the house choir for the BRAT Pack Concert sponsored by the Gospel Music Workshop of America. The Brat Pack concert included Bishop Walker, Donald Lawrence, and Ricky Dillard. We were given 16 songs to learn and execute. This was one of the hardest tasks ever, but I believe this was the moment that solidified our name in the mind of Bishop Walker.

After that, we performed at Bishop Walker’s Choir Fest for ten years. We also sang for Bishop Hez’s Musical Tribute when he was inducted into the G.M.A. Hall of Fame. We formed a great working relationship! Whenever Bishop hosted his conferences in Atlanta, he would always call us to come, minister.

In 2018, during the Stellar Awards in Vegas, Bishop called and said he wanted to meet. Of course, with no hesitation, I went to meet him. He shared that he was starting his own label, Hez House Entertainment. He extended the invitation for me to be one of his first artists, and the rest is history!

Bishop has made this journey very smooth. He would always give me advice even before I signed to the label. He has always been one of the many voices of reason for me. He always tells me the truth as it relates to the music industry as a whole. I think the pressure comes because I want to make him proud. I want him to be proud of the investment and the chance he took on me to be one of his artists. That’s the real pressure.

Speaking of Sunday Music, do you feel Gospel choirs are still essential to the Black church experience?

Absolutely!!! Choirs are the foundation of the Black Church. When I was growing up, most people came to church to hear the choir!

With the pandemic, everyone has been looking for a sense of hope – hoping that we will see a clearing with this virus one day. What has been your biggest challenge during this time? And how has the pandemic influenced your album?

One of the biggest challenges I faced was how to stay hopeful and inspired, as well as how to keep my members encouraged and inspired. Especially when we were losing family members and even choir members, how was I going to help them see God in the midst of all of this, knowing I was afraid of the unknown myself? I actually gave up on the project because of the uncertainty of us ever seeing outside again. Completing the project felt pointless at the time. Looking at the news daily, all you saw was doom and gloom. People lost their faith, and there was no joy in sight. I laid down in bed one night, and I heard a voice say, “PICK IT BACK UP!” This was the only thing that God knew would keep me sane. I called my team, and we got back to work. I knew that the message within these songs needed to be heard.

Your new album, Third Round, what should the listeners look forward to?

Kevin Lemons & Higher Calling have created an album that resonates with one’s spirit and will be played for generations on out.

Kevin Lemons & Higher Calling was founded when Kevin and a group of young singers came together for a special music event created by Kevin’s father, Wilbert Lemons. Kevin’s father was the director of the historic Atlanta Masonic Choir founded by Kevin’s grandmother Annie Ruth Lemons. The group enjoyed singing together so much that they decided to stay together. Today, Kevin Lemons & Higher Calling is a 100-member ensemble with 50 Atlanta-based singers and 50 additional singers from California, Virginia, the DMV area, New York, New Orleans, Texas, North Carolina, Florida, and Alabama.

Be sure to subscribe to the ENSPIRE Newsletter for the latest Entertainment and Community News.