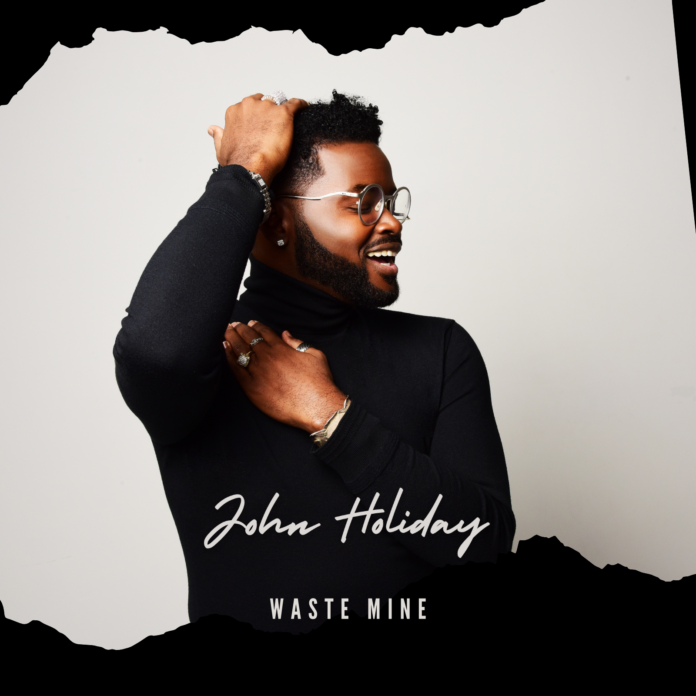 John Holiday is an up-and-coming acclaimed concert singer who’s continuing his path to success after releasing his debut single “Alive in Me” on August 6th. His newest song is a ballad called “Waste Mine” and was released September 24th on all major streaming platforms. This Texas native has an abundance of musical experience under his belt and is praised by Los Angeles Times as “one of the finest countertenors of his generation.” He has performed at venues such as Carnegie Hall and the Lincoln Center besides opening up for Jason Mraz in concert. Some other accomplishments worth noting are his performances at Ozwald Boateng Harlem Runway Show at The Apollo Theater in 2019, which was attended by those such as Jamie Foxx and Idris Elba, and on Season 19 of NBC’s singing competition “The Voice.” Holiday’s songs mostly touch on the subjects of life and relationships, which both come with obstacles you have to face head-on.

While many songs about relationships profess one’s love for someone or how distraught they are over a breakup, Holiday’s newest single “Waste Mine” takes on a different perspective. It explores the rule we often attempt to adhere to, which is refraining from wasting someone’s time. This is a song that resonates with the singer personally as it was first introduced to him at the start of a new relationship with his now fiance Rio Souma, who was also a contestant on “The Voice.” In this song, Holiday is telling Sauma that he’s curious to see where their journey leads and ponders on certain scenarios, such as watching movies already seen. Listeners are reminded that life is filled with uncertainties and are encouraged to take risks to witness the outcomes.

ENSPIRE talked to John Holiday about his new single, “Waste Mine,” his musical background, and plans for his career.

Where are you from?

I’m from a city called Rosenberg, Texas, in Fort Bend County – about 30 miles outside of Houston, Texas. A few of my best friends would say that I’m a country boy at heart.

How did you get started in music?

At an early age, I got my start singing in Church. My mother and grandmother have told me that I sang before I spoke. Luckily, I had great influences, in church, to emulate.

What genre(s) does your music fall into?

Hmmm… that’s a hard one because I come from a very eclectic musical background. With this crossover album, I’d say that it falls into the pop music genre, but I also think there are other influences in the music you’ll hear on this album.

Who are your music influences?

What types of songs do you write?

I write all kinds of songs, and I’d say that my songs tend to be about love and life.  And how one lives it more authentically. My songs are about the journey of love and the things that happen in life. The good, the bad, the unexpected, and the expected. It’s about the human condition.

What do you have planned for future music?

I am planning to release these amazing singles and to continue working with the most amazing producers, co-writers, and artists. This entire process has been an amazing one, and I’m so proud of what we’ve been able to achieve with this music. To not just sing beautiful music but to tell stories… stories that people can relate to.

When it comes to relationships and other major life decisions, many people are hesitant in pursuing them because of past toxic encounters and worrying if they’re going to fail. John Holiday’s single “Waste Mine” encourages those listening that life is too short to wonder about the “what ifs.” The song also says that while a relationship may end up going sour for whatever reason, at least you know you tried and can take away lessons from every person you cross paths with.