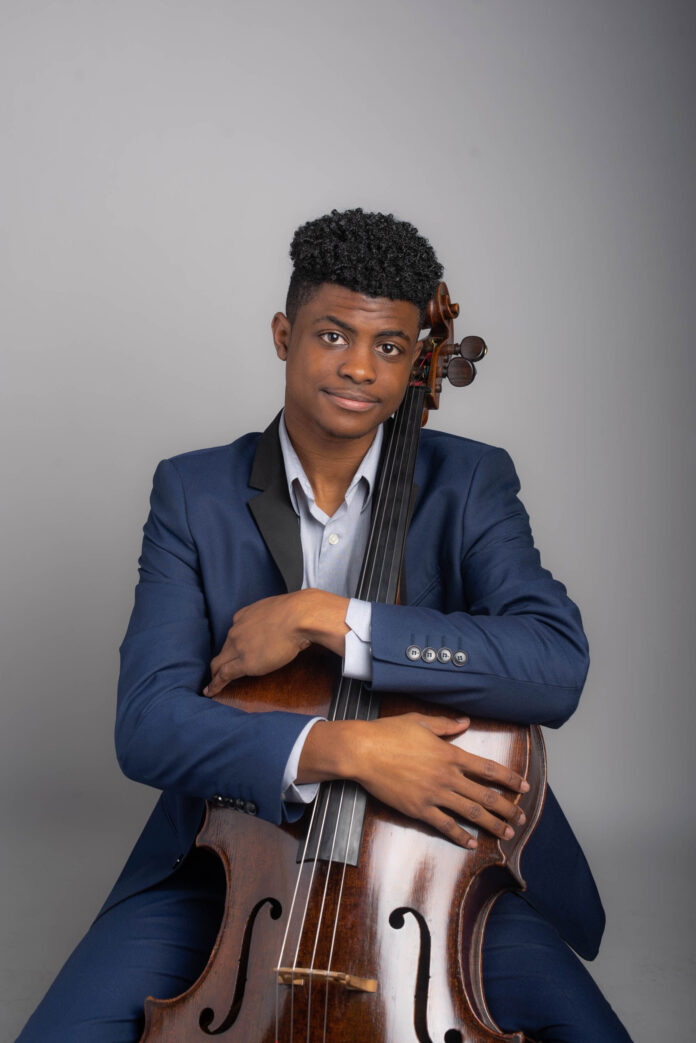 Child musical prodigy Sterling Elliott began playing the cello at only three years old, and now, a twenty-year-old student musician, his future as a classical musician is looking brighter than ever. He has been the recipient of dozens of awards, scholarships, and grants. As recently as 2019, he became the youngest ever finalist for the very prestigious Annual Sphinx Competition, which was accompanied by equally prestigious performance opportunities and a neat $50,000. But this is not even close to the first award he’s received–in fact, he began winning competitions at the tender age of seven!

As a Black musician in a predominately white field, Elliott is carving out space not only for himself but for the young Black musicians he inspires every day. His talent and skill have guided him to an incredible career as a classical musician, but with that comes a lot of pressure.

Elliott recently spoke with ENSPIRE about music, his career, and burnout.

What does music mean to you? How has being a musician impacted your life?

Some of my very first performances were pop-up public concerts at libraries and malls with my family string quartet when I was 5 years old. Before I was even old enough to know it, one of my main focuses being an artist was to just play music so that the public could enjoy it, whether it was the background music for a few hours, special music requests for weddings, or soloist concerts.

Hearing all the audience’s comments on how moving or inspiring the music was always made the multitude of hours’ worth of practicing worth it. This quartet experience, which took up most of my childhood, influenced me in a number of ways as I was not only taught firsthand the value of informally sharing music with a variety of audiences, but I also got a glimpse of the joy that surrounds a musician’s livelihood. I really enjoyed changing the narrative about what the ‌public would expect from a string quartet, both in the setting in which we would perform and the actual music we presented.

I believe many potential classical music lovers are fearful of the “high-class” setting that classical music is usually perceived in, therefore playing predominantly in informal settings such as malls, libraries, and schools helped to reach a more diverse audience, as well as spark an interest for classical music in those who would have otherwise avoided the genre.

What are your hopes for your musical career?

My goal as an artist has always been to simply share my passion with audiences across the globe. However, as my career develops and I can expand further on the idea of my role as an artist in society, I would like my ultimate goal in music to be focused on furthering music’s reach in all communities.

It brings me great satisfaction to be at a point in my career where I have the freedom to open up my agenda to several artistic engagements in under-resourced communities which might have a little budget for public music education, let alone a traveling guest artist. Several of the rewards I’ve earned from competitions and career grants have purposed for this reason, which allows me the ability to share my music with few limitations.

I hope to continue my reach across the states and around the world as my career unfolds.

How do you handle the responsibility and pressure that comes with being a Black man in a predominately white field? How has your community embraced/not embraced you as a musician?

Along with performing in concert halls, I frequent smaller communities and educational settings in which my position as a role model and an inspiring figure becomes clearly evident to other people of color.

Among the many factors for why classical music has struggled to welcome diverse communities, one of the simplest influences amasses the representation of people of color in classical music. In my youth, I was often met with a puzzled look when explaining my need to go home and practice or explain why I was performing over the weekend rather than going to a sporting event. I got quite used to being the odd one out in all classical music settings, such as orchestral events or competitions, with the only other Black musicians in my local area comprising my older siblings.

At ‌12 years old, the community of the Sphinx Organization, an organization dedicated to promoting diversity in the arts took me in. Sphinx worked to combat the small representation (2%) of people of color in professional orchestras across America; they offer many programs specifically for Latinx and African-Americans, including a highly prestigious National Competition and Career Grant which has been the primary catalyst for the growth and trajectory of my career.

Being a child prodigy and following that talent to adulthood must be taxing. How do you ward off burnout?

I’ve found myself increasingly susceptible to burnout as my career grows and with it the magnitude of opportunities and performance engagements that are presented to me. Saying no has and continues to be a struggle for me as I find the experience and inspiration behind each potential engagement so attractive.

In recent years, the pandemic-related void that was created in the entertainment and performing arts industry forced my career to a halt ‌when it was growing exponentially. The silver lining surrounding this opportunity was that I could step back and recognize the dangers of my impending burnout, which turned out to be just on the horizon.

There is this rush of pleasure an artist gets once we are in a zone in which we are constantly pushing our limits creatively, emotionally, and physically. Usually, these limits are realized only after having surpassed them, therefore I constantly teeter on the line of my limit.

You have had many accomplishments already at such a young age! What has been your proudest moment so far?

I recently had the honor of performing the Tchaikovsky Rococo Variation with the LA Philharmonic at the Hollywood Bowl during the Tchaikovsky Spectacular, one of their most ticketed events of the year. This stunning amphitheater is a truly unique concert venue as it not only seats upwards of 17,000, but also features a variety of music from artists such as Stephen Marley, Billie Eilish, and classical musicians such as myself!

The incredibly affordable tickets and informal setting of the Bowl work extraordinarily well to bring in several audience members that may not be frequent concertgoers. The excitement and energy of the sold-out show at such a venue were palpable with deafening silences during cadenza sections of the Rococo, as well as whistles and cheers after virtuosic riffs. It was quite spectacular to experience such spirit and exuberance from an audience, especially after so many months of performing with only microphones and cameras!

Elliott’s experiences are inspiring even to those who have never touched an instrument in their lives. His perseverance even in the face of creative burnout and his dedication to his craft is what set him apart from others in his field. We at ENSPIRE wish him all the best in his future projects and will cheer him on from the sidelines!