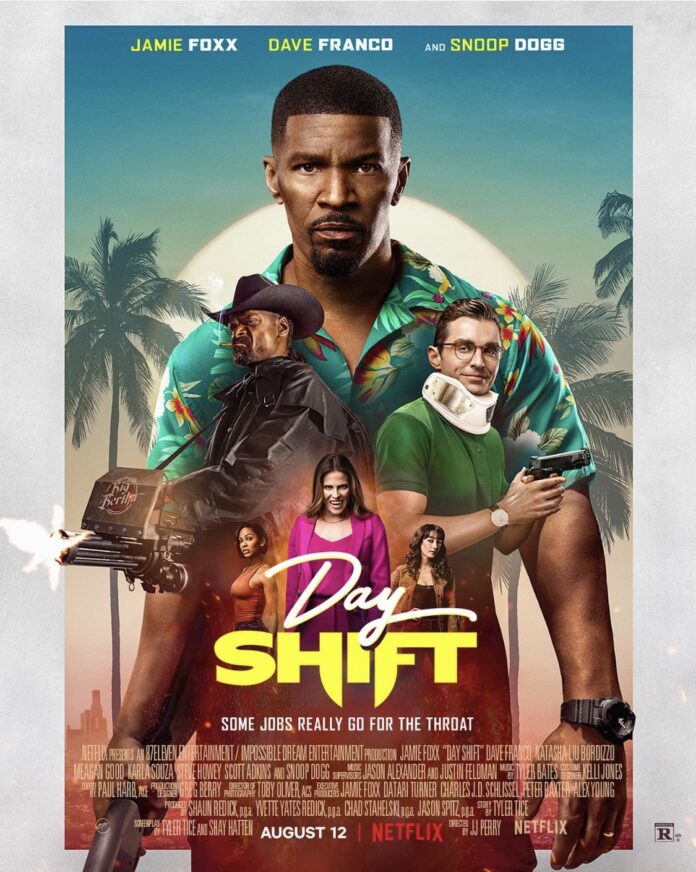 The new original Netflix film, ‘Day Shift,’ stars Jamie Foxx in this action-packed film with a kick of comedy with the help of a fantastic list of actors. With the release on August 10, this movie will feature celebrities such as Snoop Dogg, Karla Souza, Dave Franco, Megan Good, and Natasha Liu Bordizzo.

Jamie Foxx stars as Bud Jablonski, a hard-working blue-collar dad who wants to provide a good life for his daughter. His San Fernando Valley pool cleaning job is used as a front for what he does to get his primary source of income. Bud hunts and kills vampires at this job for the international union of vampire hunters.

Once he isn’t a union member, he must find a solution to deal with the low paychecks he received from selling vampire parts. Since he and his family are deciding to move, he must find a way to obtain the compensations he needs for this big move. When Bud decides to get back into the union, his old friend, who plays Snoop Dogg, helps him out by giving him tips and praising his excellent work as a hunter.

With this film directed by J.J Perry, we already know it will be filled with massive action since he staged fights in films such as ‘John Wick’ and ‘Iron Man.’ This upcoming sci-fi movie is something you do not want to miss, with hysterical acting with hunting vampire scenes like no other. If you enjoy action-packed sci-fi films or want to laugh, this film is for you.

Check out the trailer of ‘Day Shift’ below!

URBAN ONE HONORS 2022 Brought Out the Best Stars