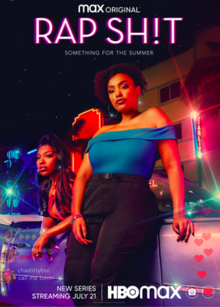 ‘Rap Sh!t’ was created by Issa Rae and show written by Syreeta Singleton, television writer for HBO Max’s “Insecure” (2016). During the production process, the duo realized they would need original raps for the show. Rae’s music label, Raedio, enlisted the help of notable female rappers, PineappleCITI, Deezy, and NCognita. When asked why they opted to go with only female rappers, Singleton said “there are so many men behind some of these songs” and they wanted to defy that norm in ‘Rap Sh!t.’

While it is categorized as a comedy, Rae and Singleton infuse each episode with social commentary, critiquing our social media-obsessed culture and addressing double standards within the rap industry. In fact, how Rae manipulates the plot, interweaving storylines and cutting from one character to another, mimics the jostling experience of scrolling through a social media feed. Immersing watchers into Shawna and Mia’s worlds, ‘Rap Sh!t’ reveals the toxic nature of social media and the pressures and expectations to paint a perfect online persona.

Inspired by the careers of real-life rap goddesses, like Cardi B, Megan Thee Stallion, and Nicki Minaj, the series also aims to shine a light on a major double standard in the rap industry: The fact that women are simultaneously sexualized and villanized when they choose to embrace and lean into their own sexuality. By drawing attention to this lose-lose situation, ‘Rap Shit’ is revolutionizing the rap world and making space for females in the industry.

HBO Max dropped the fifth episode of the series on Thursday (Aug. 11) and the remaining three episodes are scheduled to be released over the next three weeks, with the last one premiering on September 1.

Stream ‘Rap Sh!t’ on HBO Max and listen to ‘Chat Sh!t: The Official Rap Sh!t Podcast’ on Spotify or Apple Music for episode insights, recaps, and all the inside tea.

Check out the official trailer for ‘Rap Shit’ Below!

Erica Campbell and Roland Martin to Host 2021 Urban One Honors