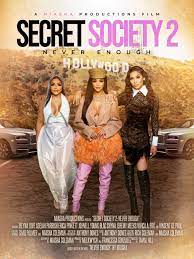 The sequel picks up where the first movie left off, following Celess (Reyna Love) as she navigates difficult situations and stomach-churning plot twists with her friend SiSi (Adejah Parrish). While the movie itself will be a hit, the woman behind the film and the novel that inspired it deserves some ‌spotlight too.

Reflecting ‌on her childhood in Philadelphia, Miasha Colemen recalls dreaming of becoming a writer from a young age. In fact, when she was nine, her dad secretly submitted one of her poems to The Daily News and it was published. Inspired by the confidence that seeing her name in print gave her, Miasha continued writing poems and stories, eventually becoming known by her classmates for her creativity and brilliance with a pen and composition book.

She wrote her first book, ‘Secret Society’ in 2006, straight out of college, which immediately grabbed the attention of Urban Lit’s Teri Wood. After wisely seeking the of a practiced literary agent, Liza Dawson, Miasha’s book went to auction and landed her a historic book deal, one not usually given to first-time authors. While she continues to succeed in the world of print, her directorial debut of the film version of ‘Secret Society’ made serious waves and has us excited to see what this powerhouse of a woman will do next.

Check out the official trailer for ‘Secret Society 2: Never Enough’ below and watch the entire film now on Amazon Prime.