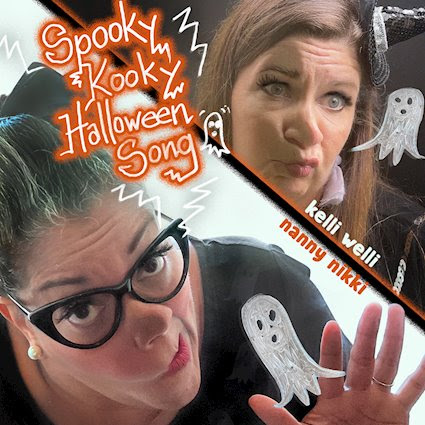 Kelli Welli wrote the original version of “Spooky Kooky Halloween Song” for a Halloween performance in Portland, Oregon last year. When it was time to record the song, Kelli immediately thought of joining forces with Chicago-based musician Nanny Nikki, who had some great ideas for hamming up the existing song by turning it into a friendly competition in which each silly friend tries to be “spookier.” Producer Bryan Daste helped to give the song just the right vibe: spooky, but not all that spooky! The gal pals had loads of fun being doofy, kooky, and down right goofy.

“I thought working with Nikki on this song would be pretty fun, but I was wrong – it was WAY MORE FUN than I expected,” says Kelli Welli. “This was our first collaboration, and Nikki brought in such awesome ideas. We’re truly kindred spirits. And when two goofballs find the freedom to be themselves together … that’s a joy-filled space.”

The feeling were more than mutual for Nanny Nikki who stated, “”Working with Kelli was like talking with another version of myself. We are so very much in the world in the same way…. you might even say that it’s a little spooky!”

ABOUT KELLI WELLI:
Kelli Caldwell, who performs for kids as Kelli Welli, is an active songwriter in both the children’s and singer-songwriter/Americana (“grown-up”) music arenas. She has released three award-winning children’s albums, was the Grand Prize Winner in the children’s category of the 2021 John Lennon Songwriting Contest, and is a finalist in this year’s John Lennon Songwriting Contest. Kelli was a winner of the West Coast Songwriters International Song Contest in 2019, 2020, 2021, and 2022, and she was a finalist in the International Songwriting Competition in 2019, 2020, and 2021 and the Great American Song Contest in 2021. Although Kelli is relatively new to the thriving Portland, Oregon kindie performance scene, PDX Parent magazine has named her a TOP 5 Parent Pick.

ABOUT NANNY NIKKI:
Grammy® nominated for her contribution to the One Tribe Collective album, All One Tribe, which celebrates the rich culture and diversity that Black voices bring to family music, Nanny Nikki (Nikki Rung) recently released her first solo EP, Sing & Soar.

There has never been a time in Nanny Nikki’s life when she hasn’t been singing to or with children. From her roots in children’s choir, musical theater, and gospel choir to 15 years as a professional nanny, Nikki knows kids and knows how to relate to them through music. She is now an interactive children’s entertainer and teaching artist who performs in person and virtually throughout the country.

ENSPIRE is dedicated to embracing the TREAT of the Halloween spirit and this isn’t a TRICK! So turn up the tunes with some ghosts and some ghouls for some Halloween fun!

No need to wait for a full moon to kick your Halloween fun into flight, take a listen to “Spooky Kooky Halloween Song” available October 14 on all streaming services.