( ENSPIRE Music ) And What Other Artists Can Learn Too

One day, Esh Morgan was smoothly dancing on a door as the setting sun painted the sky orange behind him. The next, he was sparring with his younger brother, wearing both formalwear and a bulbous pair of red boxing gloves. And on yet another day, he was sitting in his bathtub letting his soft guitar and singing echo off the polished tile surrounding him.

It was all a part of Esh Morgan’s 100 Days of Songwriting challenge, in which he wrote a song every day for 100 days straight. Morgan, singer/songwriter and half of the band EshxSchief, documented his journey on TikTok, posting songs about everything from existential musings to cake recipes.

Perfecting his craft for one hundred days taught him a lot not just about songwriting, but about creativity‌. The following are a few lessons he told ENSPIRE about that ring true for any artist.

Lesson #1: There are 100 different ways to write a song, so experiment!

Morgan claims this is the biggest lesson he learned over the course of his 100-day journey.

“There’s 100 different ways to write a song, number one. And you can always change the formula depending on what the song needs,” Morgan said. “Let the song do what it needs to do and a lot of the times it’ll write itself. Don’t try to fit it into a box.”

Freeing yourself of limitations naturally leads to experimentation. Sometimes you have an idea that is best expressed using new or different songwriting methods. Morgan found himself in this situation often,  experimenting with a ton of new styles: reggae music, new wave music, and a ton of other styles based on audience request.

“It was cool. It took me out of my comfort zone and it allowed me to really practice music in a way that I’ve wanted to for a long time,” Morgan said. “That was the main goal of exploring those genres is still being able to create great music while stepping out of my usual genre of a singer-songwriter.”

Lesson #2: Keep your audience involved in the process.

Part of what made Morgan’s journey so epic and winding were the many – and sometimes strange – songwriting prompts his followers gave him.

Some requests were heartfelt and genuine, asking Morgan to write songs about helping a friend through a tough time, missing a significant other in a long-distance relationship, or about a follower’s home country of New Zealand. There was a power in the way Morgan’s audience trusted him to express their emotions through music. Other requests were more lighthearted. One follower on TikTok even challenged Morgan to make a song out of a cake recipe! Another follower made a very specific request to turn the events of their awful morning into a song.

Not only did embracing these requests give Morgan more opportunities to experiment with his music, it helped him keep on track throughout his 100 days.

“Another important thing about the 10s was that I’m pretty sure song requests fulfilled all of those songs. So at that point, I was also trying to make sure that I was keeping the audience involved in the project’s process,” Morgan said. “I think that’s what really kickstarted it and made me able to get the inspiration because I had my subjects already. I knew what I was going to talk about.”

Lesson #3: Kurt Cobain knew what he was talking about.

“You hear Kurt Cobane go ‘Oh [that song] doesn’t really mean anything, I was just writing it.’ After 100 days of songs, I realized that ‘Okay, he’s not joking.’ Sometimes he just writes it to write it because he doesn’t know what else to say.”

Just sing and play whatever is on your heart, whatever brings you catharsis in that moment of feeling, without worrying about how others will interpret it. Strangely enough, sometimes it’s this ambiguity that helps so many people connect with it.

Lesson #4: Even lack of inspiration is a feeling that you can express with your art.

As Morgan recounts, there were a good number of days throughout this challenge in which he completely lacked inspiration. On those days, he said, he would just try to play something that felt right to him‌. He notes that if you are honest in your art and try to genuinely express what is on your mind, you can even turn negative emotions into a song.

“So if there was ever a time where I couldn’t think of what to say, I would try and play riffs and play chords, and try and let those speak to me and decide how I was feeling that day,” Morgan said. “Because even on a sad day, you know what to write about. You know, it’s gonna be a sad song. You know on a day that someone made you upset, you’re gonna put that into the song. But it was those days that I just kind of felt nothing and just drained from all the work that I just had to let the music speak for me. And then I would come up with those lyrics based on the music that I made that day.” 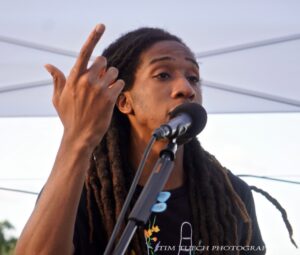 This is a particularly insightful piece of advice for artists looking to nurture their social media presence, as Morgan explains.

Part of what made this challenge so helpful for Morgan, he explains, is that it gave him the opportunity to consistently post meaningful content rather than filler posts. His audience also came to understand that he was challenging himself and expected his daily posts, which expanded his following.

“Keep putting yourself out there the way you intend to be seen,” Morgan said.

Lesson #6: Sometimes the simplest, rawest things can connect with people, so don’t be afraid to share something vulnerable and unpolished.

Esh Morgan shared all the songs he created on social media, but found that the one people connected with the most was the song he wrote on Day 64. He performed that one while sitting in his bathtub, recording himself playing guitar. It was one of his simplest videos, and to Morgan’s surprise, one of his most successful.

It surprised him that a video with such minimal production quality did better than a video he worked much harder on. But sometimes, he realized, that’s the nature of art. You never know what is going to connect with your audience.

“One of my favorite songs that I produced was Day 47 ‘Animal House.’ The production on that was really cool because it has that electric guitar and acoustic guitar being so important in the different sections of the song. And it was just a high energy type of fun song, but it didn’t do hundreds and hundreds of likes. Meanwhile, Day 64, where I didn’t spend nearly as much time on the production because all I did was play my guitar, there was no production, got the most likes out of all the 100 days of songs.”

Reply to @cardboard.recycled This one spoke to a lot of people surprisingly #100DaysofSongs #ayoungmanandhisguitar #songwriter #fyp

Lesson #7  Let yourself go through phases.

Morgan measures his journey in 10-day intervals. The first 10 days, he says, was a change period where he learned to balance the excitement of starting something new with the self-care habits needed to sustain that routine.

“The 10s was definitely, ‘I’m ready to do this.’ Because it was fresh, I wasn’t tired,” Morgan said. “But then it got worse. I was like ‘Okay, I gotta pay attention to my schedule and make sure I’m taking care of myself.’ Because it was around day eight that I had already started forming bad sleeping habits and things like that. So the 10s was where I kind of got into a better rhythm and it was just trying to make fun of music.”

Throughout the rest of the challenge, he would experience phases where his excitement rose and fell. At certain intervals, his songs would take on different tones depending on what was going on in his life. In fact, the aforementioned song for Day 64, the popular bathtub solo, was born out of a somber time in Morgan’s life.

“For me, it was just an interesting time during the 100 days of songs. During the 50s is when my grandfather passed away. I had written the song “Rise Up And Live,” which is now called “I Will Never Forget,” which I released with my family Morgan Heritage,” Morgan explained. “So going forward into those songs, the 60s kind of got introspective. A good amount from the 40s to the 60s got introspective and talked about deeper things. I was just in that zone of being vulnerable. So I think when people hear that in a singer-songwriter, it makes them vulnerable as well.”

Overall, the emotional roller-coaster resulted in a wide variety of sound and meaning of the 100 songs he produced.

Now that the challenge is completed, Esh Morgan has been performing some of his best songs from the challenge in front of live audiences to great applause. Morgan plans on releasing audience favorites on Spotify soon. For now, you can find his songs under the #100daysofsongs on TikTok or on his Instagram page.

So awesome taking this collection of songs to the live stage!! The call and response on this one is great when the crowd is vibin! #ayoungmanandhisguitar #100DaysofSongs #music #livemusic #singalong #goodvibes

WNBA Viewership Explodes In Both Regular And Post-Season