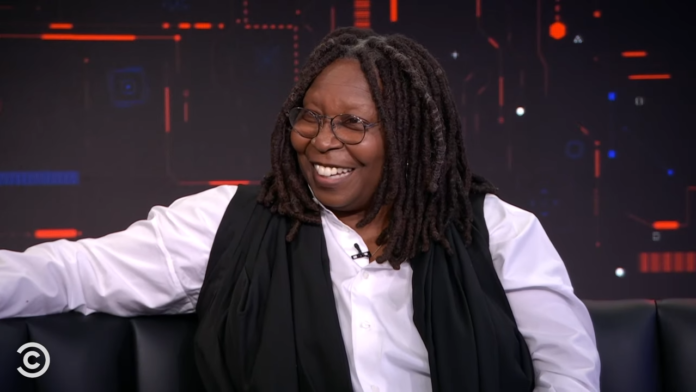 Whoopi Goldberg is turning in her multi-colored wardrobe in exchange for a shade we haven’t seen her in for quite some time. You’ve guessed it, black, black, and more black. In this week’s episode of Comedy Central, Charlamagne Tha God interviewed EGOT Winner and The View co-host Whoopi Goldberg, where she publicly confirmed the production of ‘Sister Act 3’. Goldberg stated in the interview she would love for Keke Palmer to be a part of the Sister Act cast, as well as Nicki Minaj and Lizzo.

It’s no surprise Goldberg had some fun times working on the set of the comedy film, Sister Act One where Goldberg played Deloris Van Cartier, a Las Vegas showgirl forced to disguise herself as a nun, under the witness protection program. In 1993, after Goldberg’s first debut as Sister Mary Clarence in sister act one, she returns to the screen with fellow costars and Nun sisters, Sister Mary Patrick played by Hocus Pocus actress Kathy Najimy and Sister Mary Roberts portrayed by Wendy McKenna.

In Act Two, Deloris has committed herself to a life of prayer, alongside her sisters only this time she was on a mission to shape the lives of high school students by showing them anything is possible with the grace of God. Lauren Hill makes her appearance as a young Catholic School student name Rita. Raised by a single mother, Rita is forced between choosing the path her mother has chosen for her or following her classmates, on a journey to pursue her dream of becoming a singer. In a soulful comedy, Goldberg takes us on an adventure filled with light, humor, and friendship. Now for the third time around, Goldberg hopes to drive right in for more of that Sister Act fun.

With one out of three confirmations for Goldberg’s dream team co-stars, we have to wonder if the other two are saving their big debuts for the big screens, or if it will take a little more convincing for these two colorful individuals. Perhaps we should pray for it! ENSPIRE would love to see these queens be brought to light in Sister Act 3. One thing is for certain, with the confirmed return of Kathy Najimy as Sister Mary Patrick, we are in for loads of laughter as Disney takes us on a journey in time through old-school film classics reincarnated into the must-see film of the century. Will it be the Sister Act we all love and adore or do these corky nuns have another surprise in store? We’ll just have to wait and see. Prepare your popcorn for this movie magic because Sister Act is back!

On December 2020 Disney announced, they would release Sister Act 3 on their main streaming services.

Related Articles: Hell of A Week with Charlamagne Tha God, Kevin Hart and Charlamagne PresentSummer of 85”