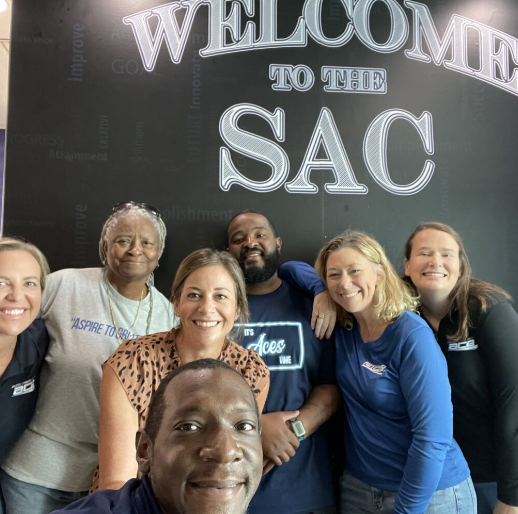 ( ENSPIRE Community Spotlight ) ACES “Never Give Up Day” Recognizes Alumni Who Never Gave Up, Getting Through Difficult Times No Matter the Circumstances

Gerald Hearns is a William T. Dwyer graduate who played at Florida A&M University and later transferred to Florida Atlantic University for his football career as a running back. Hearns is an NFL hopeful and an inspiration for many. Hearns overcame many obstacles to get to where he is today, a Construction Manager with Florida Power & Light (FPL) and a mentor. Those obstacles include growing up with violence; having his younger brother’s father die in front of their home. Hearns was faced with another obstacle once graduating college. Although an NFL draft prospect, his dreams of playing football were put on hold and a new career blossomed.

Hearns on his journey found Student ACES, a non-profit with the mission to inspire student-athletes to become men and women of honor through their education programs. There he met Buck Martinez, co-founder of Student ACES and former FPL executive, who would become his role model and never give up on him. Through ACES, Hearns learned the values of integrity, leadership, and respect. He even served as a mentor in the program as a junior board member throughout college.

It is through the program that Hearns was introduced to the world of solar energy. After joining FPL as a Construction Manager, Hearns had the opportunity to give back to Student ACES once again. Gerald never gave up on his dreams and with the help of everyone at ACES along his journey and now along with ACES and FPL they help students that many others, unfortunately, had given up on.  On August 18 Hearns and many other alumni were honored at this year’s “Never Give Up Day”.

ENSPIRE talked with ACES about what they do to help students.

What inspired the founding of Student ACES?

In 2013, Krissy Webb and her father Buck Martinez were driving across the state of Florida in a U-Haul when she turned to her father and asked “Who will my kids look up to?” Krissy had recently had twin daughters. Through the ensuing conversation, Buck realized that his most memorable and rewarding experiences were attained when teaching and/or coaching his three daughters and their teammates and classmates. Dedicated to the idea that every student deserves access to character education to succeed, he and Krissy wanted to form an organization that would help put the country’s future in prepared, capable hands.

With that in mind, they started Student ACES in order to instill values into the next generation of leaders and role models. The organization was established to create a pathway for young men and women to achieve the highest standards of leadership. The inspiration for Student ACES stemmed from their desire to see every student achieve a foundation of leadership that would generate positive outcomes and tremendous success in the students’ lives.

On average, how many people become alumni of Student ACES per year?

While this does vary, especially over the past few years as a result of the coronavirus pandemic, we typically have 150 high school students become alumni of Student ACES per year.  From a participation perspective, we also have 70 students in Belle Glade who attend The Student ACES Center, our only physical location that serves as an afterschool center providing students with a safe, stable, and nurturing environment, year-round. We also have about 20 girls who participate in our ACES Elite program, a first-of-its-kind travel softball program incorporating research-driven character education programming into competitive athletics launched as a pilot in 10U girls softball in July 2022.

Does Student ACES tend to maintain contact with those who take part in the program post-graduation? And If so, how long?

Yes, we maintain relationships with our alumni. We’re firm believers in remaining a constant in our students’ lives and always being here to support them. Many of our students come back on their own accord to help others in the program and serve as mentors, taking part in the programming and helping them when considering colleges and careers. Once in a student’s life, always in a student’s life.

What are some ways that Student ACES motivates and inspires students under its banner?

Besides students motivating others to do well, we have many programs in place that motivate and inspire the students to do well. The unique part of our program is that many of our students in our programming are already leaders on the athletic field. Our programming serves as a reinforcement and a reminder of the importance of honor, character, and integrity on and off the field. Being surrounded by fellow leaders also serves as great motivation.

Besides recognition programs throughout the year, we also have our coveted Champions of Character recognition. Student-athletes chosen as Champions of Character have shown that they are role models both on and off the field, and have distinguished themselves as leaders in their schools and communities. Student ACES honors these students as shining examples of leadership, as individuals who have successfully developed strong and virtuous characters.

Student ACES is supporting students who need guidance and motivates them to do what they love. ACES created a motivational program to help youth strive to see their own worth and create real leaders. Gerald Hearns is a real example of their work and their dedication to making true relationships with the students they help.