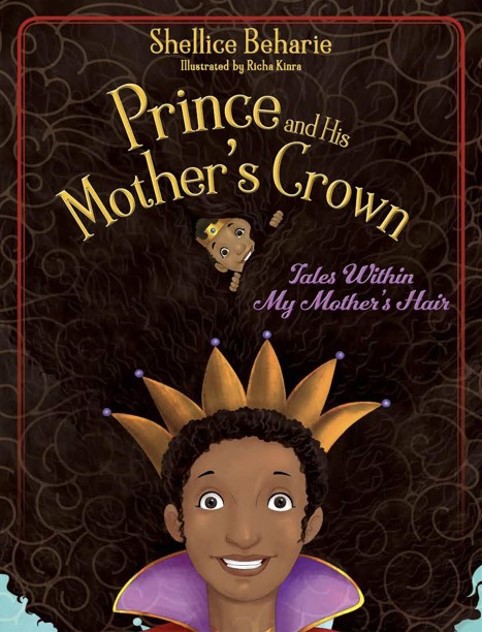 With November’s National Children’s Picture Book Month coming to an end we wanted to bring to you the journey of Shellice Beharie whose April 2020 debut children’s book, Prince and His Mother’s Crown: Tales Within My Mother’s Hair is the inspiring and reflective story needed in every child’s bookshelf. Born in Boston, Massachusetts and growing up in New Jersey and Guam, Beharie traveled to numerous places in Africa, Central America, Asia, and Europe before settling down in southern California with her family and seeing-eye dog, Uma. A 2003 graduate of The Fashion Institute of Design and Merchandising in Los Angeles, Beharie gained varied experiences through a series of multi-industrial internships including working with designer Michael Herrera, AKA M protégé of Karl Kanai at Anoname Denim, Interscope and Geffen A&M Records in the Marketing Department with Candace Barry and at Source Magazine in New York as a fashion stylist working with Williams Rawls.  Blacklisted Couture, Beharie’s own fashion brand and showroom at the California Market Center came to be in 2014.

She serves as a chapter affiliate in Inglewood for and is a member of, the National Federation for the Blind; having lost her vision due to retinal detachment and glaucoma in 2016. With pursued passions in fashion, music, and entertainment industries Beharie began using her creative strengths towards storytelling. Writing and telling stories to her children became a cherished tradition that, as a mother of two boys, she also saw as a valuable lesson. She learned and taught her children, that dedicating time and effort to learning and truly living a happy life with physical limitations was more than possible. Beharie took it upon herself to gain the new skills needed now that she was living with a disability. This included attending school for the visually impaired where she was guided on living independently, managing mobility, adjusting to new computer knowledge, and learning braille.

By 2019 she began writing  Prince & His Mother’s Crown: Tales within My Mother’s Hair, published by Outskirt Press, which was inspired by her younger son Christian’s enjoyment and fondness for playing with her hair. It was Christian who encouraged his mother to write a children’s book about her hair, and after the passing of her older son Nicholas in a car accident on Memorial Day weekend in 2019 Beharie knew it was the direction she was meant to take.  Up until March 2020, having to change course due to COVID-19 lockdown regulations, she had been volunteering at a drug and mental health rehabilitation center. A continuous project of Shellice’s includes the dedication of a scholarship fund for minority children in memory of Nicholas at his school Pearl Prep. Both the scholarship and she recently debuted children’s book on the precious love and admiration found through an adventure in the setting of a mother’s hair, will continue to honor and keep his memory alive for years to come. The book will also be a  reminder to all children that they are important and special, a necessary message in a world quick to assume an objective nature of what is beautiful.

The book is a grade level K-3 for young readers and is illustrated by Richa Kinra. It navigates a colorful and powerful layout of imagery to teach young boys about relationship building, between themselves and their family through analogies focused on their mother’s hair,  during their early developmental stages of childhood. Some images include the natural and ethereal image of a mother’s afro like that of a strong growing tree and the resilience and capability of a mother’s terraces as it holds the weight of her child climbing up a castle wall. The book takes the readers on a warm and loving story of a queen and her son, a prince. Her son’s imagination dictates the adventures that intertwine with the queen’s lovely locs. Each page affectionately develops the bond between mother and son and the versatility, diversity, and deep-rooted appreciation for African American hair. Another important element of the book is to encourage young Black boys to build connections with their hair, in doing so sending messages that repel notions of gendered behavior or dissuasion of self-love. Young boys can see the princes in them and the queens in their mothers as they read aloud, together, through a story that reflects love and empowers all generations.

It is important to Beharie that young boys understand they have every right to freedom of expression of affection and imagination. She says specifically, “it’s healthy for them. It should not be taboo or forbidden for our little boys to play with hair. Touch is a love language and a child touching their mother’s hair is a simple way to express love without words.” She also has a few suggestions for parents, family members, and anyone interested in learning how to participate in Picture Book Month.  There are many ways such as  “purchasing and reading children’s books, connecting with local libraries and writing organizations for virtual author readings,” she notes, including “a great activity for kids is drawing and coloring images inspired from their favorite children’s books. There are several resources on the website www.EveryChildaReader.net.”

Prince and His Mother’s Crown: Tales Within My Mother’s Hair can be purchased on Amazon and Barnes & Noble. To learn more about Shellice Beharie’s initiatives visit authorshellicebeharie.com and connect with her on Facebook, Twitter, and Instagram.