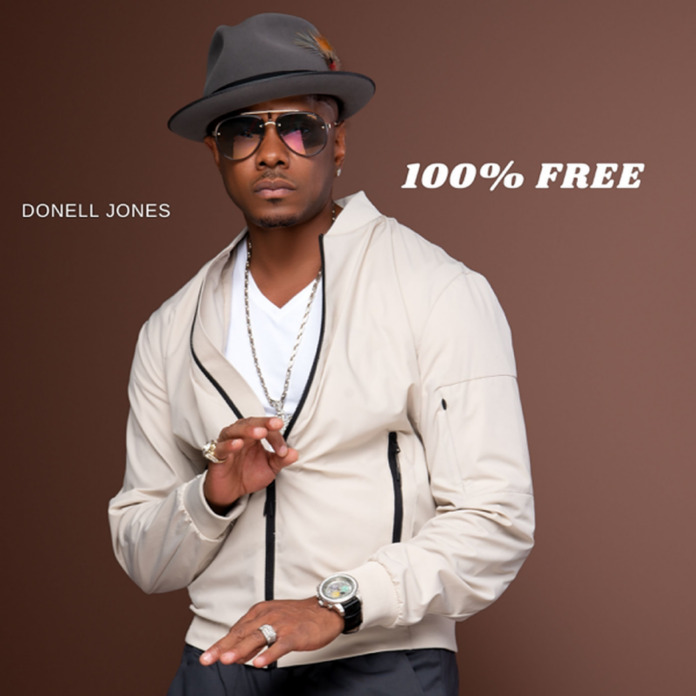 ( ENSPIRE Music ) Multifaceted R&B Sensation, Donell Jones Gave Away New Album, 100% FREE, for Free, and Some Proceeds will be Donated to the “Missing Kids” Foundation

American Music Award Winner, Donell Jones, known for his chart-hitting tracks like “Where I Wanna Be” and “Knocks Me Off My Feet” released his 7th studio album, 100% FREE after a 7-year hiatus. Fans, friends, and family have been anticipating this newly needed release for quite some time now and have expressed that since he’s been gone R&B and soul music just has not been the same. With new singles “Karma (Payback)” and “Deep N2U” available on Apple Music, the singer, songwriter, and producer has given his supporters a taste of his new mature sound and they are thirsty for more.

100% FREE is a project that was created to embrace ’s evolution in music and as a man. He was once addicted to alcohol, smoking cigarettes, self-sabotage, and negative thinking but he’s no longer bound to things that do not add any value to his life. Since he’s no longer signed to a record label and has become independent with his own company, CandyMan Music, Love Jones has been 100% FREE to tap into his authentic creativity and is producing lyrical content that is relatable and timeless. There are seven songs on this project.

“The album is free but if you want to support me you can buy it… I did this for my fans that may be less fortunate and don’t have the money or maybe you’ll download and say I want to support him anyway. It’s up to you but for me it’s no pressure. I just wanted to put some music out that feels good,” Donell said.

For those who are looking to grab the album, it is currently available for pre-order on iTunes, and those who want to make a donation can do so at DonellJonesMusic.com and 25% of the proceeds will go to the charity MissingKids.org.

“Our children are the future and if we are not protecting and teaching them to think free then our future as humanity will never see its full potential. Yes, abuse is when you beat a child but abuse is also when you teach a child to hate others and/or themselves,” Donell said, who is a father of six.

“Also during 2020 I didn’t realize how many children come up missing every year and when I heard 800k I was blown away by the fact that no one is talking about this as much as so I wanted to speak on it and help out in any way that I can, which is why I chose the FindTheChildren foundation,” he added.

Donell Jones is a husband, a family man, but also someone with a big heart. He hopes that his contribution will make an impact on bringing kids home and reuniting them with the people who love them the most.

To listen and download 100% FREE, be sure to check it out on all streaming services as well as the album on his website at DonellJonesMusic.com.