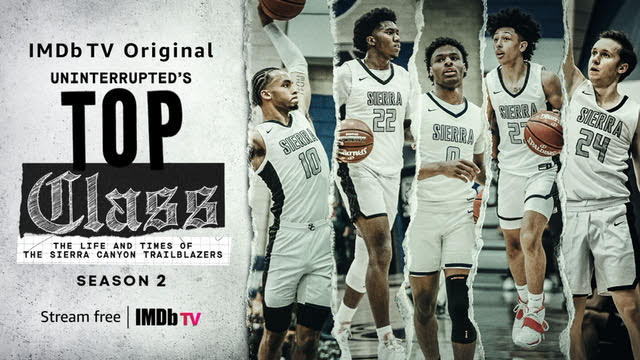 Sierra Canyon, home of the Trailblazers, is a small school in the San Fernando Valley that has become an academic—and athletic—powerhouse. Their basketball program is a perennial contender for California high school state titles and hopes to bring a national championship to Los Angeles County.

All six episodes of the new season will be available to stream for free beginning Friday, December 17. The entire first season of UNINTERRUPTED’s Top Class: The Life and Times of the Sierra Canyon Trailblazers is currently available exclusively on IMDb TV.

UNINTERRUPTED is a Sports Emmy-award-winning athlete empowerment media, experiences, and consumer product brand that is part of The SpringHill Company, the media conglomerate spearheaded by LeBron James and Maverick Carter with the mission to empower greatness in every individual. UNINTERRUPTED’s original content properties, including The Shop: UNINTERRUPTED, Kneading Dough, and More Than An Athlete, impact culture and inspire meaningful conversations within and beyond sport and entertainment.

Check out Amazon Prime Video for more information on IMDb TV and check out UNINTERRUPTED on Facebook.

Another article you may enjoy: WNBA Reaches New Viewing Heights With Jonquel Jones