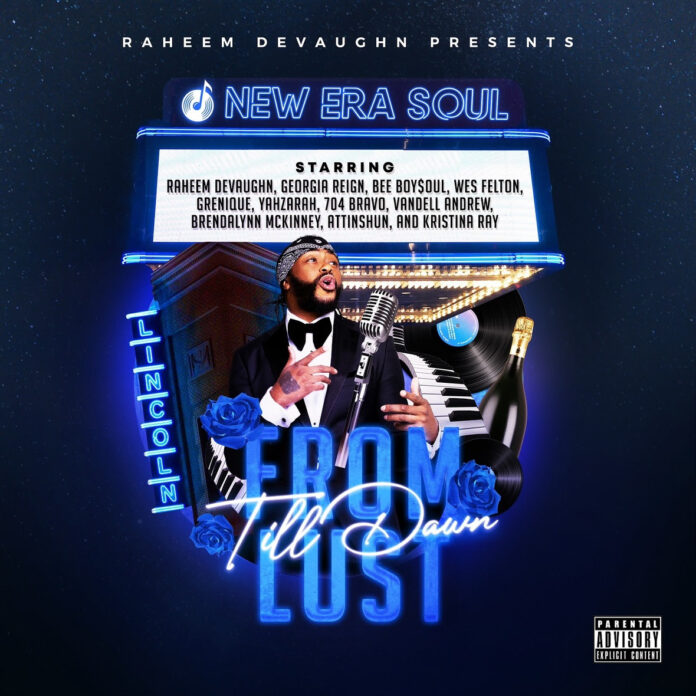 Raheem DeVaughn Presents From Lust Till Dawn is globally available now via the New Era Soul/SRG-ILS Group label imprint. The collaboration album was introduced to the masses with the first release, “Wait On Me” (Remix)(Part 2) from Georgia Reign featuring Raheem DeVaughn. It was followed by the already fan-favorite, “If I Don’t” by Raheem DeVaughn. Click here to further indulge in Raheem’s inspiring and soulful music.

“If I Don’t” was written by Raheem DeVaughn and produced by Tim Kelley. “The inspiration behind the song came after having many conversations with Black women and I realized they want to be recognized for how they show up in relationships,” mentions Raheem. “‘If I Don’t’ is an introspective record that speaks for women in the third person regarding how they want to be recognized and appreciated by the man in their life,” he adds.

“I want to be known and have a name for being a contributor to the culture of R&B and soul music,” flatly states R&B lovers’ very own “the Love King,” while clarifying the inspiration behind his soon-to-be-released, stylistically diverse, multi-artist Raheem DeVaughn Presents From Lust Till Dawn set, “not just though my music but it could be through my penmanship, through songs that I write or artists I’ve discovered…not only in the D.C. area but artists from different parts of the country and the world.” Dependably a “man of his word” often known to practice what he preaches, Raheem’s musically rich “R&B radio show-meets-summer-cookout-mixtape”-themed LP does just that, featuring collaborating artists from his own music tribe (jazz-hop poet/vocalist Wes Felton, R&B-jazz-hip-hop producer/musician Bee Boy$oul, DeVaughn’s tour band Attinshun, alternative soul-rock stylist YahZarah), two promising discoveries encountered via social media (Houston-bred vocalist Brendalynn McKinney, newcomer/Atlanta siren Kristina Ray), a returning 90s song stylist on the comeback (sultry neo-soulstress Grenique) and up-and-coming recording artists Raheem genuinely came across as a music lover himself (singer-rapper 704 Bravo; song stylist Georgia Reign).

“A few of the artists are people I met through social media and became a fan of what they do,” divulges Raheem of the eclectic mix of music artists featured on Raheem DeVaughn Presents From Lust Till Dawn. “I met Brendalynn McKinney through Instagram. I met Bravo in Charlotte at a rehearsal space when I was preparing to go out on tour with Ledisi and Leela James. Attinshun is a group that is actually my band. Georgia Reign’s`Wait On Me’ has been out for a little bit; I feel like it deserved attention. I just want to share my platform with those people who develop soul and R&B…artists and voices that I’m fond of that are new. Or maybe they’re voices that you haven’t heard in a minute. I [just] always wanted to be able to do that.”

Rounding out Raheem DeVaughn Presents From Lust Till Dawn are those dependable, trademark slow grooves Raheem DeVaughn’s core fans anxiously awaiting his full-fledged follow-up to 2019’s Love Reunion have come to expect. Absolutely no disappointments in that musical area as Raheem’s highly emotive, multi-layered, falsetto-to-full-voiced vocal display faithfully elevate the melodramatic, strings-accompanied R&B/pop balladry of “Retrograde;” the airy, soothing drip-drop R&Beat flow of his Prince-hued “Wet Again” and those chill-inducing, Marvin-like ad libs that confidently mark his stunningly show-stopping male take on music legend Janet Jackson’s 90s Quiet Storm classic “Anytime.” “I remade that a while ago,” he confesses, “and to be honest with you, it’s been floating around on SoundCloud and I just figured it deserved to be heard properly. I was finishing up ‘From Lust Till Dawn’ and I was in the studio listening to it and I was like ‘Yo, let’s officially mix this record and put some live strings on it.’ I think you can never go wrong with a good remake, or in some cases, a good sample. People love what’s familiar to the ear. And if you execute it properly, you can’t go wrong.”

Those spit-shined, ready-for-show time, “soul man” designer kicks sported by classic R&B’s all-time “Men of Soul Hierarchy”–men with first-name recognition like Sam, Smokey, Marvin, Stevie, Teddy, Al, Luther, or Donny–are indeed one-of-a-kind soulful shoes to fill. While more than a few may have laid claim to the keys of the long-cherished, ever-evolving rhythm & blues kingdom, it may take more than hit songs and an arsenal of wide-ranged vocal riffs and runs in his back pocket to rule the king’s court. On the contrary, claiming that slot as R&B/soul’s preeminent, the premier “Man of Song” may take someone with an expansive, instinctive knowledge of the genre, genuine love of the culture, and dedication to its authenticity, and “R&B Renaissance Man” of sorts…someone like soul-deep, R&B chart mainstay, three-time Grammy-nominated singer/songwriter/DeVaughn Enterprises CEO, Raheem DeVaughn.

Consistent with a sense of soulful community, just in time for that late spring/early summer 2022 rollout of Raheem DeVaughn Presents From Lust Till Dawn, comes the double-whammy release of Georgia Reign’s sultry, old-school flavored “Wait On Me” and Raheem’s tight-grooved summer bop “If I Don’t” as back-to-back singles previewing this fictitious, yet musically interesting “radio show” playlist envisioned, curated, created and “hosted” by our very own DeVaughn (in radio host alter-ego mode). “Georgia and worked together in the past,” says Raheem of the Brandy-reminiscent sounding songstress’ smoldering and smoothed-out musical introduction to mainstream listeners of contemporary R&B. “We recently reconnected and she expressed that she’d be on board with what we’re doing, moving forward. So we added her single `Wait On Me’ to Raheem DeVaughn Presents From Lust Till Dawn and I also went in and did a remix for it, which is also on the project. What’s going to be interesting with this song, in particular, is we have a bunch of different versions we’re going to be putting out, as well as visuals with a modern-day soap opera kind of vibe.” Simultaneously, working the airwaves and streaming platforms upon release of the set is his own bright-textured “If I Don’t” single, an easy-breezy, light-boppin’ summer-sounding groove sure to please core fans of past hits “Don’t Come Easy” and “What It Feels Like.” “‘If I Don’t’ is like an uptempo record with that spring/summer-time, put-the-windows-down, open the sun-roof, driving up the east coast’s 95 on the freeway-type vibe,” he shares. “Georgia’s video comes out next week, and I’m looking to drop the video for ‘If I Don’t’ the week of or the same day as the album. I’m looking to do a lot of visuals for this project to introduce the different artists. Introducing my audience to this kind of progressive sound calls for a lot of visuals.”

On that very soulful note, let the R&B/soul-steeped summer-into-fall sounds begin! With sonically diverse sounds, Raheem DeVaughn Presents From Lust Till Dawn has the immediate feel of a sexy-sounding after-hours radio show and soundtrack for the season musically suited for every occasion. “For me, it just boils down to being a dope body of work,” Raheem confesses. “It’s something that’s for the summer…and hot for the summer. They’re records that speak to intimacy and sex. When you think of summer, you think of it being sexy…shirts, shorts, summer dressing, and that whole vibe. We touch on all of those different spaces of soul and R&B.” From the new millennial-R&B-meets-80s-pop/rock swagger of alternative diva YahZarah’s attitude-drenched “Creatures” to Raheem’s retro 90’s-spiced verse flow in soul-stirring tandem with Georgia Reign’s butter-smooth 90s-hinted swooning on the immediately catchy “Wait On Me, Pt.2,” Raheem DeVaughn Presents From Lust Till Dawn has a selection for every music taste. While DeVaughn’s groove-driven “If I Don’t” could be easily followed up by 704 Bravo’s similarly upbeat, head-boppin’ “Patience;” with its infectious, trap soul-sprinkled, lo-fi R&Beat ballad flow, or that signature smooth-jazz bump of Wes Felton & Vandell Andrew’s sly-vibed, urban AC-fused title track, as expected from any Raheem DeVaughn musical endeavor, the slow jams and ballads aurally and emotionally slay.

Career-making vocal showcasing emerges from one-time Motown vocalist Grenique’s sugary-sweet and confident update of Minnie Riperton’s 70s R&B nugget “Memory Lane;” Brendalynn McKinney’s angelic-sounding stylings above the dreamy, “Waiting For Your Love;” Kristina Ray’s breathy, Aaliyah-ish swooning amidst the airy R&Beat balladry of “Say It;” Bee Boy$oul’s “vocoder”-induced electro-soul reworking of 80s Motown classic “With You, I’m Born Again;” and DeVaughn’s very own band Attinshun manage that seemingly out-of-nowhere surprise slow-grindin’ standout with “Catching Feelings,” a heavily retro-influenced cut bearing heavy Prince B-side album cut flavor. “My musical director Jerell, who is my bass player is also the lead vocalist for Attinshun,” he explains. “They’ve been so dope and so loyal that I wanted them in the process.”

More than living up to his promise of keeping listeners consistently engaged with a steadily first-rate musical output, Raheem DeVaughn Presents From Lust Till Dawn follows the momentum created by his two-part set, 2018’s Decade of a Love King and 2019’s Love Reunion, as well as Billboard Adult R&B chart hits like “Just Right,” “Don’t Come Easy,” and “What It Feels Like.” “Everything about this album has been totally organic, nothing was forced and I feel like that’s the way it has to be,” he states. “Ideally we’re finding and creating new fans.” Although there may be little more convincing left to do amongst faithful supporters who have followed his journey and listened to his artistry develop since “The Love Experience” (2005). Having already paid his dues throughout the Washington, D.C. club circuit, Raheem achieved a major breakthrough with his sophomore release, 2008’s Love Behind the Melody, which not only hit #1 on Billboard’s Top 10 R&B/Hip-Hop Album charts but garnered two Grammy nominations, one BET Award, and two BET J Virtual Awards. In 2010, “A Place Called Love Land” maintained the momentum, earning him yet another Grammy nomination and more popular singles. As the music industry landscape went through its changes, Raheem took the bold step of going independent and taking full creative control starting with the 2013 release of “A Place Called Love Land” and continuing with 2015’s “Love, Sex, & Passion” which impressively charted at #4 on Billboard’s Top R&B/Hip-Hop Album charts, #2 on Billboard’s Independent Album chart and #31 on Billboard’s Top 200 chart. His trilogy-instigating Decade of a Love King continued that long-building momentum, resulting in two charts hits and an NAACP Image Award nomination.

Conclusively, anyone bestowed with the title of R&B/soul “king” moving forward may need more than a substantial following or a self-serving “greatest hits” playlist. They would need the desire to uplift the long-beloved genre while cultivating the culture. As with Raheem DeVaughn Presents From Lust Till Dawn and mostly all other musical endeavors, vocalist Raheem DeVaughn proves he’s qualified for the crown. “R&B and soul music is alive and well!” affirms the award-winning song stylist. “Not only are there a lot of dope independent artists on this project that you may be discovering for the first time, but tap in, tap out, zone out and crack a bottle of wine and go down the rabbit-hole of Spotify, Apple Music, and other streaming platforms to find dope artists and the ‘next thing.’ It’s great to be able to associate and use my brand to put on great talent. That’s where I’m at in my life and what I want to be known for.”