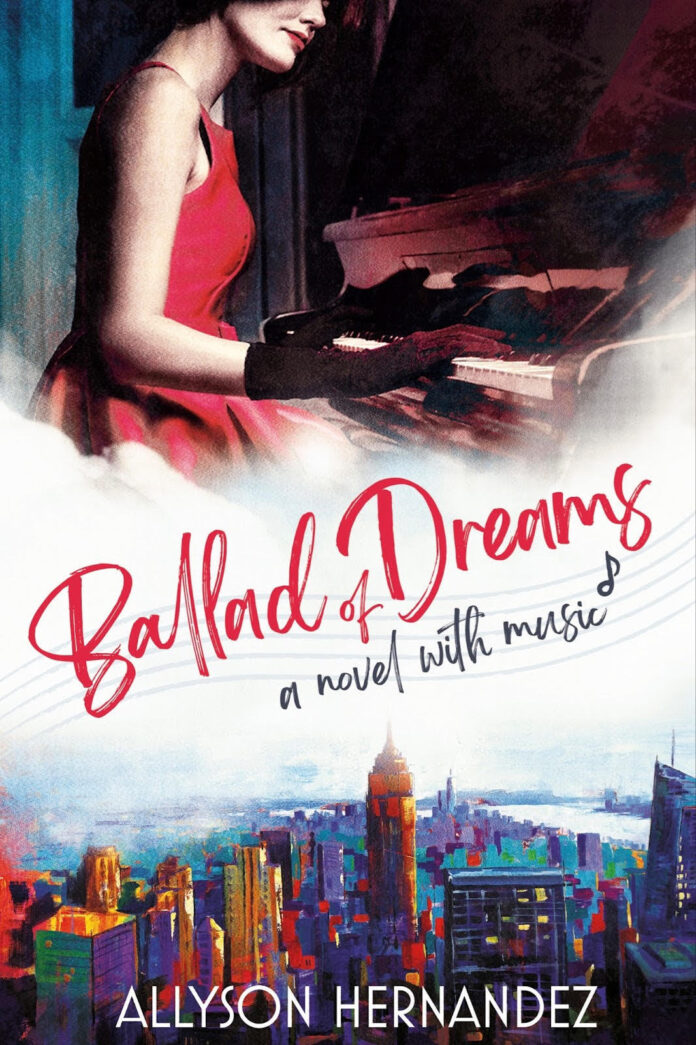 A debut novel with music embodies the concept of companionship from the album featuring music for the novel. A huge part of this project is the music written by multip-hyphenate, Allyson Hernandez. Initially written as a musical pre-pandemic, Ballad of Dreams features the lyrics from the original music embedded in the book similar to a musical libretto.

Audrey and Rose are cousins and best friends in 1940 New York City. Their trajectories, choices, sacrifices, and life experiences are drastically different, but their friendship remains constant. Each journey in discovering their own identities and independence as women in a time when society tried to define that for them. Ballad of Dreams combines the richness of storytelling and flare of musical theater with historical fiction.

Who Is Allyson Hernandez?

Allyson Hernandez embodies the word multi-passionate. Being a writer, performer, composer, executive coach, and mom. She wrote Ballad of Dreams to explore who her grandmother was. She wanted to explore what she wanted before she became a mother and found the same answers for herself. As President and Founder of AH Coaching Group, she empowers clients to embrace their goals and boldly follow their dreams.

Allyson has extensive coaching experience with C-Suite Leaders, Vice Presidents, Directors, and high-potential emerging leaders. She has a BFA in Musical Theater from Syracuse University, is a member of the Actors Equity Association. Allyson even holds her ACC credentials through the International Coaching Federation. Having performed at Apollo Theater and toured with the Gospel musical “If This Had Could Talk”, directed by George Faison. On the weekends you can find Allyson singing at church and proudly cheering on the sidelines of her two sons’ soccer games. Hernandez will partner with Forbes 30 Under 30 Music list honoree Macy Schmidt, who will produce the music. Casting details will be announced at a later date.

“As a Multi-Passionate Creative and Coach who empowers women to live their best lives and follow their dreams, I knew ‌I needed a badass woman to be leading this project alongside me. I wanted to work with someone who wasn’t just going to take my music to the next level but also provide an opportunity for another woman in the musical theater industry. Macy’s work of empowering women was an immediate sign that our work and values were aligned.” said Hernandez. “I have seen firsthand the power of women helping women across all industries. I’m thrilled to be partnering with her to bring the music to life!”

Who Is Macy Schmidt?

Macy Schmidt is an Egyptian-American Orchestrator & Music Director based in NYC. She was recently named to the Forbes 30 Under 30 Music list for her work as Founder & CEO of The Broadway Sinfonietta, an all-female-identifying, majority women-of-color orchestra showcasing BIPOC women musicians on Broadway, which quickly caught the attention of the national press.

As a Music Director, she’s known for her innovative arranging work on Broadway stars. Recent projects include the upcoming Disney revival of Aida, Disney’s re-imagined UK tour of Beauty and the Beast (on which she worked alongside the original creative team), the musical adaptation of Chelsea Clinton’s SHE PERSISTED (Music Supervisor), and the acclaimed Ratatouille: The TikTok Musical (Orchestrator), for which her work was praised by The New York Times for its likeness to a “classic Disney Act I finale in the brassy manner of Alan Menken.” Macy is a passionate advocate for women in music, and is represented by ICM Partners.Macyschmidtmusic.com.

Ballad of Dreams is about friendship, dreams, love, loss, and everything in between, and is available for purchase at BalladOfDreams.com.

For Many Years, LeBron James and the Late Kobe Bryant were...

Tap. Into the App for Seamless Networking