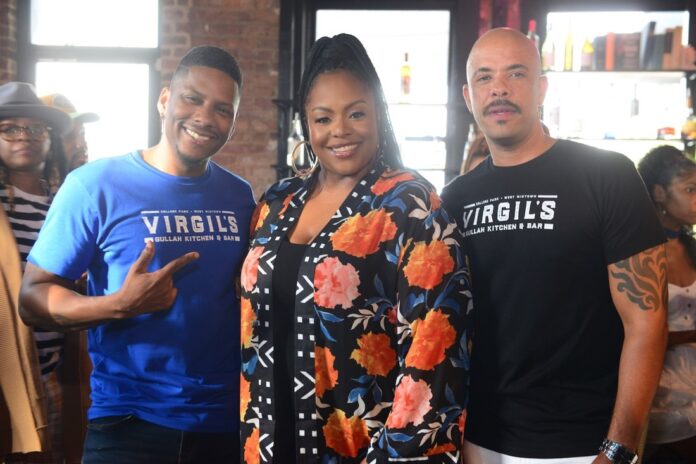 Virgil has something for everyone and is the place to hit up in New York City. Some of their tasty appetizers include Gullah Egg Rolls, Crab Dip, and Bussin’ Corn Muffins. Its main dishes are just as comforting as its appetizers with Okra Gumbo, Shrimp N Grits Wit’ Crab, and chicken, fish, and poke chop baskets. With dinner, Virgil also offers brunch. Specialties include French Toast Sticks, Be’foe Church Skillet, and Poke Chop and Eggs.

Along with Gee and Juan, Kardea Brown helped celebrate this grand opening with the owners. Brown is known for her career as an American chef and caterer, and she also appeared on the show “Delicious Miss Brown.” This show became a popular hit with 3.5 million views since its premiere in 2019 and averaged 1 million viewers per episode. Now it’s onto its sixth season, which premiered in 2022.

At the exclusive celebration, co-owner Juan Smalls shared, “What you’re witnessing is the manifestation of setting intentions, doing the work, and having and trusting your vision.” The name VIRGIL’s is a tribute to co-owner Gee Smalls’ late father. The restaurant explicitly serves food inspired by the Gullah Geechee culture. VIRGIL’S West Midtown is located at 822 Marietta St NW, Atlanta, GA 30318. Visit virgilsgullahkitchen.com for more information or to order online.