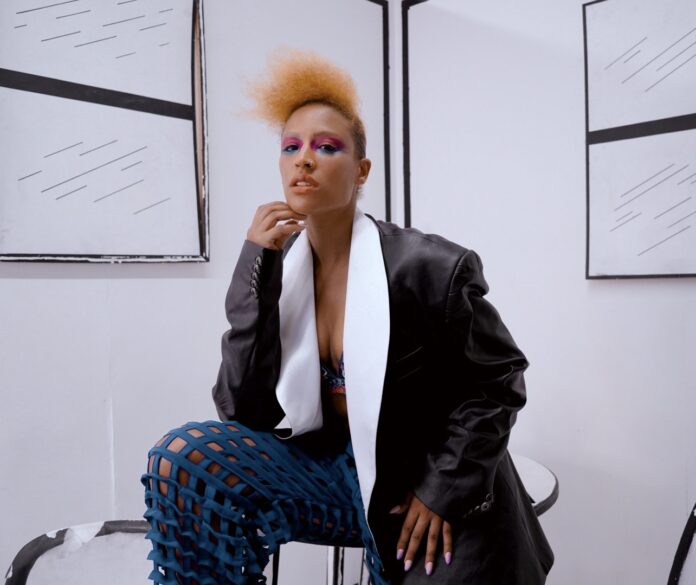 The album is the follow-up to Sandflower’s past notable and groundbreaking singles, including “Wannabe”, a reinvented cover of the 90s hit by the Spice Girls, which was featured on the Netflix blockbuster To All The Boys: Always and Forever. The visual album features 15 tracks and guests including Unstoppable Death Machine on the lead single “Quicksand.”

With an all-remarkable series of songs, from the empowerment anthem “Goddess Cxlture” to high-intensity club-bangers like “Wild Things Are” and “Shake That Bottom”; the dynamic and intense sounds will undoubtedly stick with you for years to come.

To learn more about the creative process of the album and the artist herself, we asked Sandflower some of our most burning questions!

What was the creative process of creating this visual album like? Any favorite memory in particular?

It is a really fun process and at the same time it challenges you to really bring the visual mode of each song to life! I think I have two favorite memories: the first is standing on this beautiful rock in the ocean shooting the visuals for Don’t Stress. And my second favorite memory was riding a jet ski with huge platform boots ongoing so fast on the water and trying not to fall off! It seems like water is starting to be a theme here!

Which musical and artistic inspirations inspired your debut visual album?

I was definitely inspired by music videos from the 1980s and 1990s. Artists like Duran Duran and David Byrne really dove head first into what was at the time a relatively new way of expressing the idea of a song. Artists like Tom Petty and Janet Jackson really used videos not just as a way of telling the story of the song but also giving you a glimpse into the inner workings of the artist themselves. I started thinking of each video as a world or a painting. And I started to visualize what I would want to feel and see if these videos were presented in a gallery. What would I want to show? And that really opened everything up for me because then it was no longer about making a video that made sense or fit the songs storyline perfectly – It was about being an artist using moving images to express my thoughts and emotions.

You combine visions from your meditations to create cross-genre sound experiences. What vision has been the most transcendent that has found its way onto this album?

The vision of dropping expectations and limits. The vision of inspired freedom. Sometimes when I meditate I can open myself to a space where even for a few moments I shed all the limits, ideas, hopes, past experiences. It is kind of like floating in that space even if it’s seconds – I get to start over and just live and breathe. I was thinking about this the other day that artists, especially musicians, are the only people whose life is dedicated to playing. Like I’ll go play a show but even if it’s not the same as playing tag, the meaning of the word “play” is still there. So the meditations and the visions that really keep driving me forward are the ones that let me know life is about playing in the moment. And when you’re really playing, you don’t care about yesterday or tomorrow or what someone said to you – you are so in the moment life just starts to flow.

I think experiences ‌I’ve had meditating are what led me into being interested in quantum physics. Having a sense that there’re certain truths and mysteries in this world that are real but have only recently was recognized in any way in the scientific community and the world‌. Diving into the depth of how energy connects us all even on a subatomic level. It’s so interesting to me.

Your art is certainly an encapsulation of the unique and otherworldly. What message does “The Quantum Seed” encapsulate?

The Quantum Seed is a love letter to artists, to creative thinkers, to poets, to philosophers, to the ones who know there’s more to life than the limits society places on all of us.