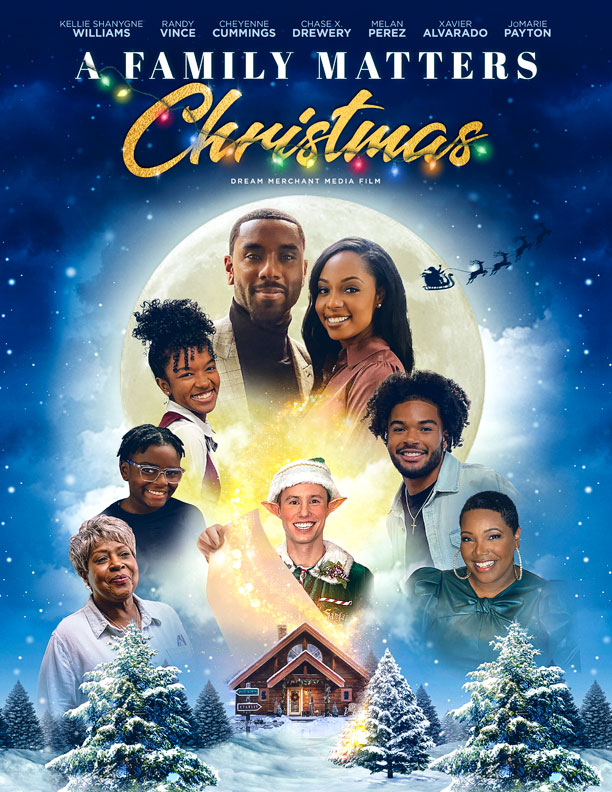 Beloved “Family Matters” stars Kellie Shanygne Williams and JoMarie Payton are being reunited for Vision Film Inc.’s upcoming movie “A Family Matters Christmas,” coming out on November 8th. The movie is directed by LaVern Whitt and also features big names such as Tommi Baker, Stephen Fisher, Cheyenne Cummings, Tameika Chavis, and more. But the cast isn’t just family in spirit – Hannah Belle Jackson, Kellie Williams’ real-life daughter, will play the role of “Hailey” in the movie. Kellie Williams’ parents, Peggy and Ervin Williams serve alongside her as executive producers for the film. William’s nephew, Julius Terry, will portray the character of “Jaxx.”

In fact, Peggy Williams, who wrote the movie as well as executively produced it, note that ‌she drew inspiration from her own life and family to tell the story.

“When I was writing the story, I realized the story mirrored my life,” Peggy Williams said. “Through those life experiences, I’ve learned to love, understanding, and forgiveness always win.”

The movie is about three siblings, Aiden, Emily, and Brandon, who just can’t seem to get along in their newly blended family. Alternis, a forgotten Christmas spirit, makes the kids switch bodies to teach them the importance of empathy, teamwork, and kindness for one another. Now, the siblings have to navigate school, home, and the holiday season ‌in the wrong bodies! You can watch the trailer on YouTube for a preview of the shenanigans.

Kellie Williams says she can see herself in her mother’s writing, particularly in the character of Emily. “We were both the middle child, but we appeared to be the oldest,” Williams said.

Now that Kellie Williams is a mother herself, she says watching her daughter perform was like déjà vu, taking her back to when she herself was a young actress. Williams was also focused on doing everything that she could to support her daughter on set.

“This was more about my daughter Hannah for me because this was her first role and I wanted this to be her moment,” Williams said. “It was a regular day for me because [my family] are together all the time. The only real difference is that I had to make sure that Hannah was prepared to be there as well.”

For Williams, having JoMarie Payton work alongside her family was like having her blood family and on-set families blend into one. This made the work–and ultimately, the movie–that much more emotionally fulfilling.

“[JoMarie Payton and I] never really lost contact, we are family,” Williams said. “Of course, having my daughter Hannah sharing the screen with JoMarie was especially heartwarming.”

“A Family Matters Christmas” premieres November 8th on all major streaming and cable platforms in the U.S. and Canada. Williams says fans of Family Matters will be sure to also love this movie.

“The fans will be excited to see JoMarie and I together again,” Williams said. “But ‌the movie has so many teachable moments just like the show.”

Meet the Brother Duo Behind the Musical Sensation 80 Empire