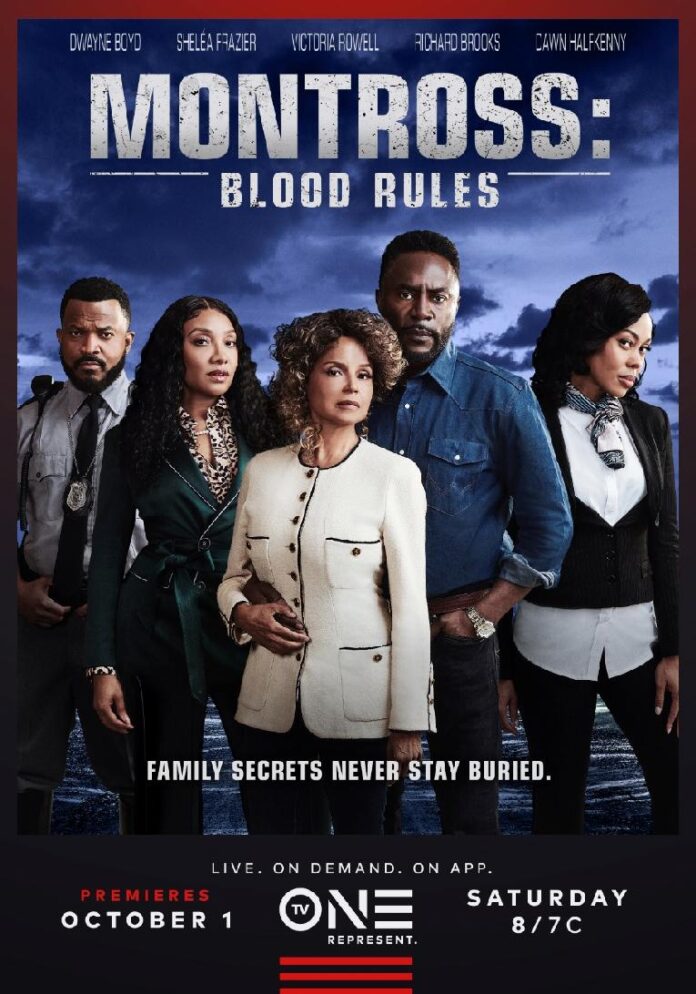 Suspense builds in TV One’s newest film, Montross: Blood Rules. The film premiered on October 1 at 8 pm EST. The film is directed by Victoria Rowell, who also plays Elaine Montross. Victoria Rowell highlights the successes of Black women and explores family dynamics throughout her work. Montross shows how families can go beyond the limit of the idealistic and patriarchal “traditional” definition that is all too common. Under Rowell’s direction, Montross: Blood Rules goes beyond the norm to tell a story beyond the imagination.

Montross: Blood Rules follows young attorney Robyn Montross (Dawn Halfkenny) returning to her hometown of Evansdale at her father’s (Richard Brooks) request. She soon unravels the web of lies that had secured her family’s power for decades. She faces her guilt and confronts the secret that has haunted her for life.

Building up suspense, each shot leaving the viewer with more questions. Shocked at the corruption of Evansdale, Robyn exclaims, “I’m going to burn it all down to the ground!” Montross: Blood Rules pushes the boundaries of drama with its heavy suspense and challenge to the nuclear family structure. While considered a thriller, the cast agreed in a virtual press conference that it was a drama.

“We’re excited to partner again with Victoria Rowell, Jami McCoy-Lankford, and Camara Davis, a phenomenal dream team, to tell this story,” said TV One’s Executive Producer Jason Ryan. “Our TV One Audience will enjoy all the plot’s twists and turns in this film.”

Victoria Rowell previously directed another TV One original film, Stranger Next Door. The Emmy Award-winning actress and director continued her longtime partnership with the network. Montross: Blood Rules is produced alongside Hillionaire Productions, whose work is featured on Amazon Prime, BET+, Hulu, and Binge Black TV.

Montross: Blood Rules is written by Camara Davis and produced by Jami McCoy-Lankford. Davis and McCoy-Lankford worked on a variety of projects together, such as Stranger Next Door and The Business of Christmas 2.