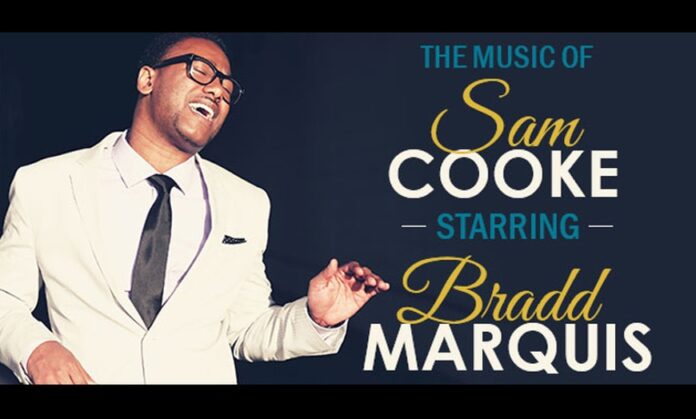 The countdown begins for the January 27th release of BRADD MARQUIS‘s rendition of the Bob Dylan and Sam Cooke song, “BLOWIN’ IN THE WIND“. In a performance of a lifetime, Marquis transports us back in time through the life of one of the most essential Soul singers in history Sam Cooke. He Explores Cooke’s evolution from the eyes of the son of a preacher living in Clarksdale, Mississippi. Viewers will take a glimpse of the life-altering stages that contributed to Cooke’s becoming as a music sensation, during a reenactment of foundational moments such as the recruitment into the number one Gospel group in Chicago, The Soul Stirrers. As the time travel continues, we venture with him as he crosses over into secular music, his rise to a pop icon, and his tragic death as he begins his transformation into a social activist.

Cooke was undoubtedly the inventor of soul music and the most popular and beloved performer of his time. Bridging the gap between black and white audiences and crossed generations Cooke released 49 singles; 20 of which rocketed to the Top Ten billboards in the genre of R&B. He is commonly known as the King of Soul for his distinctive vocal abilities and influence on the modern world of music. So what do we have to look forward to in this grand performance? Well, the concert is expected to feature the greatest hits including “You Send Me,” “Only Sixteen,” “Cupid,” “Chain Gang,” “Twistin’ the Night Away,” “A Change is Gonna Come” and “Wonderful World.” If this isn’t enough, what if we told you this soulful performance is brought to you alongside a large live band? It’s a night you’ll surely never forget!

Clearly, portraying an artist as legendary as Sam Cooke will take quite a bit of skill and talent. Many fans are raving to know the 411 on the artist in the leading role. Luckily ENSPIRE has all the details. Bradd Marquis, a veteran performer, has shared stages and toured with many artists including, Tank, Stokely of Mint Condition, Eric Roberson, Angie Stone, Faith Evans, India Arie, Tamia, and Grammy award-winning producer, Gordon Chambers, just to name a few. Besides his musical talent, Bradd Marquis was raised in a home that valued spirituality; which is believed to be prevalent in his charming, mannerable personality. Oozing with soul, this versatile young man brings the essence of music as pure and simple nature to any stage he graces.

Marquis uses his soulful tenor to captivate and inspire audiences from the very first note he belts out. Hailing from a time in music when soulful crooners like Marvin Gaye and Teddy Pendergrass monopolized the airwaves, this gifted vocalist, who is often compared to these legends, has honed in on their sounds and given life to today’s music. As a result, Bradd has graced sold-out stages all over the country, performing his signature classic tribute dedicated to soul icon, Sam Cooke. Possessing a tone, passion, and purpose that separates him from the legion of today’s male vocalists, Bradd has piqued the interest of all who witness the magic he brings to the stage. When asked what his biggest influence was Marquis gave all the credit to life. “Life man…life is my biggest influence. I use my experiences and observations to, hopefully, bring joy, love, healing, and awareness to my listeners.” He said.

Like Cooke, Marquise too has the power of enchanting his audiences. Long before his 2007 album debut, ‘the critically acclaimed Finding My Way,’ Marquis created masterpieces that would project the sentiment and style of mid 90’s RNB unseen since the days of Jodeci, Babyface, and the iconic artists of Uptown and LaFace Records. While his debut told the aftermath of Marquis’s broken engagement, it was an introspective view of a man struggling to find himself artistically and personally. In a coming-out party in celebration of Marquis’s 3rd charted billboard albums, Marquis saluted all those who had helped him through the rough patches.

”Love”, is the name of Marquis’s latest EP. It is his first release since the 2017 hit single Who Let You Go. But it is the first single, “No War,” that truly comes straight from the depths of Marquis’ soul! Written, produced, and performed by Marquis, this song captures the frustration and concerns plaguing the world today. No War is the beginning of Marquis embracing his full purpose; using music and the stage to speak to the conditions of today. Marquis is charged with uplifting, championing positive change, and projecting love like the soulful forefathers that preceded him.

Although Marquis has strived towards many accomplishments of his own, including those in music, acting, and production, Marquis doesn’t appear to be walking in the shoes of Cooke for granted in the slightest bit.

“It is truly an honor to continue to keep the legacy alive of one of the greatest performers ever,” mentions Bradd. “With the recent 58th celebratory Anniversary since the release of his iconic song, “A Change Is Gonna Come.” it is only right to kick off the new year with “Change” in our minds.”

ENSPIRE Magazine embraces artists who try to keep the memory of legacies alive. Let’s kick the New Year off with Change, Growth, and Soul. To Connect with Marquis, follow him on Facebook, Instagram, Twitter, and More!