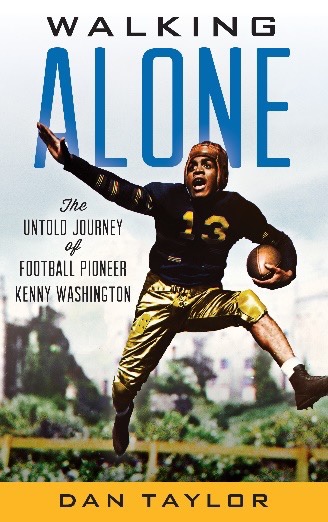 In a world where recorded history extends back thousands upon thousands of years, one that is populated by over seven billion people, the impact an individual can make may sometimes seem small. It may also appear ‌that only those born into particularly privileged positions can perform actions of any worth. Author Dan Taylor’s latest novel stands against those thoughts, highlighting the actions of one whose titanic accomplishments slipped temporarily under the radar.

Dan Taylor’s most recent work is titled Walking Alone: The Untold Journey of Football Pioneer Kenny Washington. The biography focuses on the life and accomplishments of the titular Kenny Washington. He was a football player whose stellar performance with the Los Angeles Rams paved the way for the desegregation of football‌. Despite the verbal and physical abuse he faced throughout his career, he pushed forth through all of it to make an immeasurable impact in the world of American football. Yet his tale was relatively out of the public eye, something which Taylor seeks to rectify with his writing.

In the wake of his book’s release, ENSPIRE reached out to Dan Taylor for a more thorough outlook on his motivations.

What initially drew your attention to Kenny Washington?

It came from a conversation with a friend, a UCLA alum who shared that when he taught there in the late 60s there were two professors in his department that had been on the campus in 1939 when Kenny and Jackie Robinson were football teammates. Both insisted Kenny was a far better player/athlete than Jackie. My friend said a few years later at a high school teaching job, a colleague had been a teammate of Kenny and Jackie on the 39 Bruins. He too made the same claim.

It led me to do a bit of digging into Kenny Washington and I was amazed by what I found out. Here was a guy Hall of Famers called the best player they had ever seen. His physical skills were remarkable. He could throw a football 100 yards in the air, had foot speed to outrun defensive backs, and the power to run over linebackers. His coaches said he was even better on defense. What I had not known to that point was that Washington was considered an even better baseball talent. I had read about the Dodgers’ signing of Jackie Robinson I had never seen documents, letters, and articles that it encouraged Branch Rickey to also sign Kenny along with Jackie.

Kenny’s popularity in Los Angeles was immense. A motion picture–While Thousands Cheer – was specifically written for him in the starring role. He would appear in about a dozen films during the 1940s. It was mystifying to me that something this talented, this impactful, and this important to sports history was not known of and had largely been forgotten.

Which of his games do you consider the most interesting/impactful and why?

Certainly, his debut game with the Rams was the most impactful. He came on in relief of Bob Waterfield after the Rams quarterback was injured in the third quarter of the season opener against Philadelphia. This ended a twelve-year policy of segregation in the NFL.

As far as interesting, I would point to December 5, 1937, and UCLA’s game with USC. It was Washington’s sophomore year, his first season on the varsity. From the very first meeting of the schools in 1929 USC had its way with UCLA. In this 1937 game, the Trojans led 19-0 with seven minutes to play. Washington threw a 40-yard touchdown pass to make it 19-7. UCLA got the ball right back on the ensuing kickoff. On their first play from scrimmage Washington threw a deep ball for another touchdown. Two TD passes in eighteen seconds. Bigger still, to fans and reporters, it appeared the ball traveled 72-yards in the air. Twenty-four hours later game films showed it traveled 62 yards. The pass was proclaimed to be the longest in college football history. It brought both UCLA and Washington notoriety in newspapers all across the country. Twenty years later Bert LaBrucherie, who was then the UCLA head football coach, recalled the play as the greatest he had ever seen. Even though UCLA lost the game that afternoon, 19-13, Kenny Washington’s immense skills were placed in the national spotlight for the first time and the Bruins became a force to be reckoned with in college football.

What do you consider to be Kenny Washington’s most inspiring trait?

His character. People gravitated to Kenny Washington. His teammates had great respect for him. During his sophomore season at UCLA, players went to the head coach to urge that Kenny be permitted to call the offensive plays, such as their level of respect. During the 1939 season, Washington was a mentor to his football teammate Jackie Robinson. He took Jackie on long walks and spoke to him about calming his temper. As a collegian and professional, Washington endured tremendous verbal and physical abuse on the field. While sometimes the abuse pushed him past a breaking point, he displayed a quiet dignity that won over his opponents.

Do you have any additional comments for our readers?

Prior to 1940, professional football was a non-entity on the West Coast. The birth of the Pacific Coast Professional Football League changed that. Kenny Washington’s popularity filled stadiums for his games. When the Rams left Cleveland, they also considered Dallas as a prospective landing place. I don’t think it’s a stretch to suggest that the attendance at Hollywood Bears games–because of the popularity and play of Kenny Washington – gave the Rams an idea of how they might be received if they made Los Angeles their new home. Kenny Washington not only reintegrated the NFL in 1946 but played a role in making the Rams the first big league team to call a West Coast city it’s home.

Kenny Washington, despite his great achievements in racial equality seventy-five years ago, has received relatively little time in the modern public eye. Dan Taylor’s work was published on July 13th this year and seeks to give Washington the attention and focus he deserves for his accomplishments in life. Taylor’s efforts add a new sense of worth to the actions of every person across the world by proxy. They show that nobody’s accomplishments are truly forgotten. Someone, somewhere, will always be interested in any ‌person’s life. Sometimes, it’s simply a matter of when that interest will spark, even if it’s many years in the future. For serving as a testament to the impact that individuals can leave upon history, Dan Taylor’s diligent writing and Kenny Washington’s hard yet humble work are both more than worthy of inspiring the world.

Related Articles: Three Former American Footballers Who Transcended the Fields to Impact Lives, The Most Inspirational Athletes in Sports History