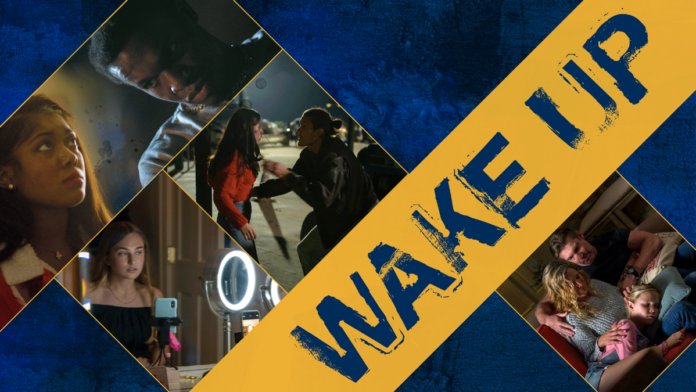 “WAKE UP” is a new film inspired by true events and provides a fresh cast that discusses awareness of human trafficking. Two women join forces to bring this taboo subject to the big screen. Not everyone acknowledges human trafficking, as it is a tragic topic. However, audiences need to be aware that this is happening to many people around the world and could be happening right under their noses. “WAKE UP” is a film contender for the Golden Globe, Oscars, and NAACP Awards. To view the trailer click here.

This debut film was produced by Kristen Wise and written and directed by Janet Craig. Being a foster mom, Janet used her personal life to do what she can to end sex trafficking. She has a degree in theatre, was a professional tennis player, and is a veteran actress. “WAKE UP” is her first feature film and was dubbed the Best Feature Film at the Sunscreen Film Festival West (2021) and Most Impactful Film by Sedona International Film Festival. The cast includes Janet Craig as Annie, Issac C. Singleton Jr. as Tanner, and O’Sahy Neal as Ian, who is a newcoming actor who is dubbed Best Dramatic Performance by the Sunscreen Film Festival West.

The plot for “WAKE UP” is when a suburban neighborhood is rattled when a pair of teenagers mysteriously disappear. The suburban community must uncover the darkness that is hiding in plain sight. It has suspense and thrillers that will have your mind itching and your skin crawling. Janet Craig has taken the time to speak with us about the creation of “WAKE UP”, the performances, and how the idea came to light.

﻿If possible, can you please go more into depth about these true events, was there a particular event that triggered this film’s creation?

One of the most profound for me was attending a fundraising event for the anti-trafficking organization Forever Found, where I heard a young woman tell her story of being trafficked. I sat  listening to this amazing young survivor speak and it affected me so much hearing it from her perspective. I wanted to bring the whole world into that room with me that evening, thinking if everyone was listening we would all feel the same way – that we need to do something to stop trafficking.

A few years after that Forever Found event, I attended a prayer meeting for a group that were involved in different aspects of foster care. My husband and I adopted one of our four children through foster care. We came together to seek God for how best to serve foster youth. I left that prayer meeting convinced that God was calling me to make a movie to shed light on foster youth. In America, foster youth are among the most vulnerable to be exploited by traffickers.

Explain the horrors of the ecosystem of human trafficking.

The human trafficking industry is everywhere, and it impacts all of us. It’s a rapidly growing multi-billion dollar industry, and it affects every age, demographic, and socioeconomic status. There’s no escaping it in our culture. The introduction of the internet has caused a profound proliferation of the exploitation.

Middle school girls seeking attention and love are making money sending pictures and videos of themselves to people who will pay them for those images. Traffickers are masquerading as boyfriends and girlfriends or just another competitor on a video game. They get someone to do something shameful and trap them with threats of exposing them or hurting those they love. The industry is fueled by buyers and the demand is growing. The vast majority of buyers are men. We desperately need men who will stand up and be protectors and not predators. The problem is shame and fear trap the buyers and the victims from seeking help. Too many people are hiding their dark secrets and that is the perfect place for the darkness to grow.

Any advice you apply to the film as well as for all of us when it comes to our safety?

US Advisory Council on Human Trafficking Rachel C. Thomas shares a chilling message at the end of the movie. She’s an amazing survivor, educator, and has many tools and trainings available for parents and children. You can find her information and other materials that may be helpful for your safety on our website at www.OfficialWakeUpMovie.com.

Rachel C. Thomas made a point that if she had seen our movie as a teenager, she wouldn’t have been trafficked. I think a big part of safety is being aware of what is happening around us and within our communities. Tami Barnett, the founder of RaisingHOPE and a producer of WAKE UP says, “It takes one caring, compassionate adult to change the life of a child.”  Shame, fear, and isolation trap many people in trafficking, so having a safe, trustworthy adult can truly alter the direction of a life.

We believe a big change can happen if we each do our part to stop trafficking. Be protectors not predators. Get help if you are struggling with addiction and be the kind of people that can help others. Be someone that is trustworthy and safe for anyone to come to when they blow it.

How would you describe O’Shay Neal’s performance?

O’Shay Neal’s performance was riveting and powerful. He brought the character of Ian to life by showing different sides of him and the need we all have for community and love. Honestly, our entire cast was amazing to work with and all gave stellar performances. We casted very talented, diverse individuals who were such a joy to work with on set.

How did the creation of WAKE UP come to fruition and what were the initial thoughts when shown at the Sunscreen Film Festival West?

This project was a miracle after miracle. We shot WAKE UP during COVID, and at that point, it had already been seven years in the making. When everything shut down, I finally had time to get the production in place. Bill Mendieta came onboard to produce and storyboard each shot.

Truthfully, an entire community came together in a powerful way to make WAKE UP. People donated locations, organized fundraisers, provided catering on set, and so much more. We had over 7,000 actors audition to be a part of this project, so we ended up with such an incredible cast. Our crew was phenomenal: Mark David and Joaquin Camillo helped us assemble the right team.

At The Sunscreen Film Festival West, I was blown away by the size of our audience. Over 200 people attended our screening, and the standing ovation afterwards felt surreal. Sunscreen was our first premiere, and winning Best Film, Best Dramatic Performance, and several other nominations was humbling beyond awe-inspiring! It was the first time we’d put the film in front of an audience. To top it off the festival takes place in Hermosa Beach, an amazing beach town where my husband and I lived when we were first married. This moment made our presence at the festival even more special.

Many of our cast and crew members joined us and some flew in from out of state for the Sunscreen premiere, and it was such a gift to have everyone present.

In addition to the film’s release, there will be a powerful cameo message at the end of the film made by the U.S. Advisory Council on Human Trafficking, Rachel C. Thomas. The filmmakers have pledged to donate profits to foster care support organizations RaisingHOPE, anti-trafficking organizations Forever Found, and ZOE International. Other organizations that have supported this film are Aetna, Soroptimist International, Alamo Drafthouse Cinemas, and Christian Alliance for Orphans.

“WAKE UP” is a film that pulls the curtain aside and starts a conversation. Human trafficking isn’t talked about. You hear horror stories of people missing. When it comes to missing children, it’s a hard pill to swallow, and “WAKE UP” is a film that brings this issue to the forefront. Both directors are voicing a concern that is darkly hidden under our noses in society, it’s time we are more aware of this issue and not afraid to talk about it. Children and all kinds of beings are experiencing this right now. This film is a creative outlet for showing it to you. Visit the Official site to learn more.

Ori Or Skincare By Dr. Runway, A Holistic Approach To Beauty

SubZero Masks Donates One Mask For Every Mask Purchased To Charities...