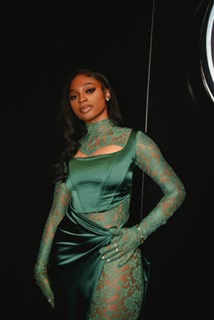 Jai’Len Josey is a 24-year-old singer-songwriter and actress. She grew up in Atlanta surrounded by the R&B and hip-hop music scene. Smooth pop tunes heavily influenced Josey at a young age rooted in live soulful R&B music. She made her professional debut on Broadway in SpongeBob SquarePants the Musical at 18 years old.

Josey released her first single “Death of a Black Girl” in 2020, followed by her debut EP “Illustrations”. The 6-track EP caught the attention of Sony Music Publishing. In 2021, Josey officially joined Sony Music Publishing as a songwriter. She has since worked with some of the music industry’s best including Jermaine Dupri and Bryan Michael-Cox. Last year, she scored her first #1 on Billboard’s Adult R&B AirPlay chart for her songwriting contributions to Ari Lennox’s “Pressure” which is now certified RIAA Gold.

ENSPIRE spoke with Jai’Len Josey about her career as an actress and singer in a recent interview.

When did you know you wanted to pursue music and acting?

I knew I wanted to pursue music when I realized there were emotions attached to it. As soon as I saw the possibility of changing someone’s mood or mindset about something just off of lyrics and performance alone, I was changed.

Growing up in Atlanta what artists influenced you the most?

The artists that influenced me the most have seemed to all pass on. Nina Simone, Ella Fitzgerald, and Donny Hathaway to name a few. Stevie Nicks, Billy Joel, Beyonce, and Michael Jackson also influenced me.

What was it like making your professional debut on Broadway at 18, and what have you learned in the industry since then?

Making my debut at 18 was a special feeling, I was grateful beyond compare. And now being 24, I realized they were telling the truth when they said “your brain doesn’t fully develop until you’re 25.” I remember being 18 unaware of the opportunity that was in front of me. Even now I look back and say “Dang! I was performing in front of 1,400 people, 8 shows a week on a broadway stage in the middle of Times Square all while still being a teenager.” And, I know for sure that’s the reason why I respect any performer in the industry because that shit is hard!

Where do you draw your inspiration to create new music?

I draw my inspiration from Life. I write about things I’ve experienced or heard, and Nothing is ever too far from the truth when I narrate. I draw from feelings and emotions, hardships, and insecurity. I like to think that my lyrics are therapy for myself, it just goes to the public instead of being kept to the privacy of my notes app.

Are you working on any new projects for the new year?

I surely am, my EP “Southern Delicacy” is on its way, and I’m coming for blood in the sweetest way possible.

Jai’Len Josey started in the industry at a young age on broadway this helped her realize the amount of afford needed to become successful. Drawing inspiration from her life to create her music and some of the music industry’s legends such as Michael Jackson, Josey only continues to grow.